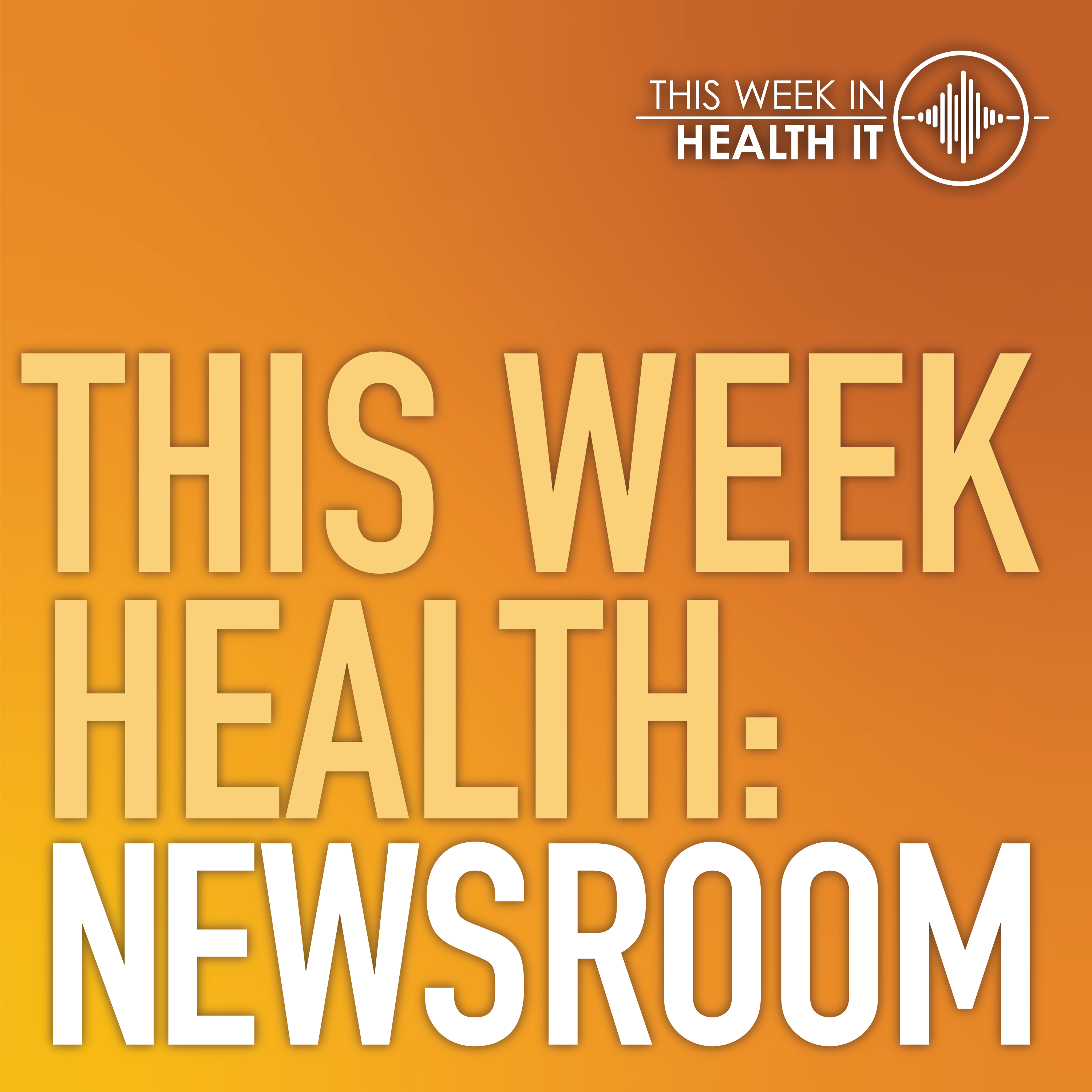 Today in health, it amplify green thinking to propel healthcare forward. That's our tagline. It's been our tagline for a while. And I want to talk about it a little bit today. My name is bill Russell. I'm a former CIO for a 16 hospital system and creator of this week health. Instead of channels dedicated to keeping health it staff current and engaged. We want to thank our show sponsors. We're investing in developing the next generation of health leaders, Gordian dynamics, Quill health tau site nuance, Canaan, medical, and current health. Check them out at this week. Health.

At this point. And when we started, we had a simple concept and it was that when I was a CIO, I had great conversations, phenomenal conversations with people. They would come into my office, they'd be experts in their field. They have been doing work for many health systems or even outside of healthcare.

And they would sit down and tell me what they could do for healthcare, or they could tell me what was going on in a certain space. And I was amazed at the level of thought the level of, , , expertise and just the. The amazing people. I was able to gain access to being a CIO for a 16 hospital system.

And when I left there after the, , after the acquisition from Providence. , I had this idea of doing a podcast. I talked to a bunch of my friends who are, who are peers, and they agree. They said, yeah, if you could have those same kinds of conversations and elevate that discussion and make it available to the general.

, public to the, to the people that work on my staff that work in my organization. That is going to move the needle and that is going to help us to, , to. You know, again, move forward faster, or as we say, propel healthcare forward. And so we started doing that. We started doing that with interviews, and then we have expanded that since with, , with the news day episode and talking about the news and what that means. And we have expanded that even more this year.

To do the community channel and the town hall. And if you haven't started listening to the town hall, it is just phenomenal. We continue to sign up additional hosts. And if you don't know what that is, we have, , people in the industry who are actual working CMIO, CIO and others. Who are doing the same thing I did.

Which is they're going out into their network of people and interviewing them. And the thing I like about it is they're talking about the things they are doing today with other people in the field that are doing similar things to what they're doing. And so you're getting a little deeper level of what's going on.

So if I great thinking to propel healthcare forward, we have the podcast, we're putting a bunch of things out there. And as we went into this year, We thought, you know what? We're, we're still not doing enough. There's, you know, there's, there's a, a higher purpose, , for all of us. And it is that healthcare would move forward, that healthcare would get better in every community that we serve.

And it doesn't matter what the demographics are and how rural or metropolitan it is. We want healthcare to get better. And I used the term better. And because we're not going to have the same healthcare across the entire country, but we can have better healthcare in every location. And that is what we're striving for. And so this year we sat back and we said, all right.

How can we facilitate this even further? And one of the things we wanted to do is we wanted to bring leaders together and not like a big old conference where you're sort of trying to find out who's at the conference and have conversations. And walk through the, the, , the, the vendor maze, if you will.

But we wouldn't have conversations where people could be honest with each other smaller conversations, 10 to 15 people in a room. , similar titles doing similar work for similar health systems. And that they would have the opportunity to share their best practices, something they're really proud of.

That they've been able to move the needle on at their health system. And you would have 10 to 15 of their peers sitting there being able to ask questions, find out about it and say, Hey, you know, I think I could bring that back to my health system. That's exceptional. And then in addition to that,

, they would, you know, be able to, , to hear from those 10 to 15 others and take those back. So not only are they sharing, but they're hearing from them as well. And then, , essentially sit down. And throw three or four topics out on the table. That everybody's struggling with and say, okay.

And the, the thing we did is, is called 2 29. And we do 2 29 groups and I'm actually doing one this weekend. And so we have a one out here. We have, , 11 CEOs, , 12 CEOs who are going to be with me out here in Utah. And we are sitting in a circle and having these discussions and sharing best practices. And, , I, I am so excited about what is going on in these 2 29 meetings.

We had one earlier this year. We have three more later. This. A year and we're planning on doing a 10 or more next year. , because they have been so dynamic and the conversations have been so great and they've been received so well. , so, you know, if you're hearing this and you're thinking, wow, that sounds exceptional. We.

, we do invite a handful of partners to, , come alongside of us and partner in our mission. And, , we generally, we have right now, we're having a for CEO's we're having them for security officers. And we are having them for CMIOs. But if you have thoughts of a group that you think, Hey, this group could get together, we could have a great discussion and really learn from each other and really move the needle forward. Maybe it's in data and analytics. Maybe it's an AI and machine learning. I don't know.

, to be honest with you, we are building this to serve the industry and your thoughts and ideas are always welcome. And they are shaping what we are doing. This year and they're shaping what we are doing next year. So if you could think of a group or what would be a part of one of those groups that, , you know, if you're in a, if you're a CIO or in one of those other.

, title groups and want to be a part, , please reach out to me bill at this week, health.com. We are going to be accelerating this going into next year based on the success of it this year. And I really hope that we could continue. To, , facilitate these conversations and live out our mission, which is to amplify great thinking to propel healthcare forward. Again, any ideas, shoot me a note.

That's all for today. If you know someone that might benefit from our channel. Cinema, send him an email, let them know that you're listening to this show and that you're getting something out of it. They can subscribe on our website. This, we call it.com or wherever you listen to podcasts, apple, Google, overcast, Spotify, Stitcher, and so forth. And so on.

We want to thank our channel sponsors who are invested in our mission to develop the next generation of health leaders, Gordian dynamics, Quill health tau site nuance, Kanan, medical, and 📍 current health. Check them out at this week. health.com/today. Thanks for listening that's all for now