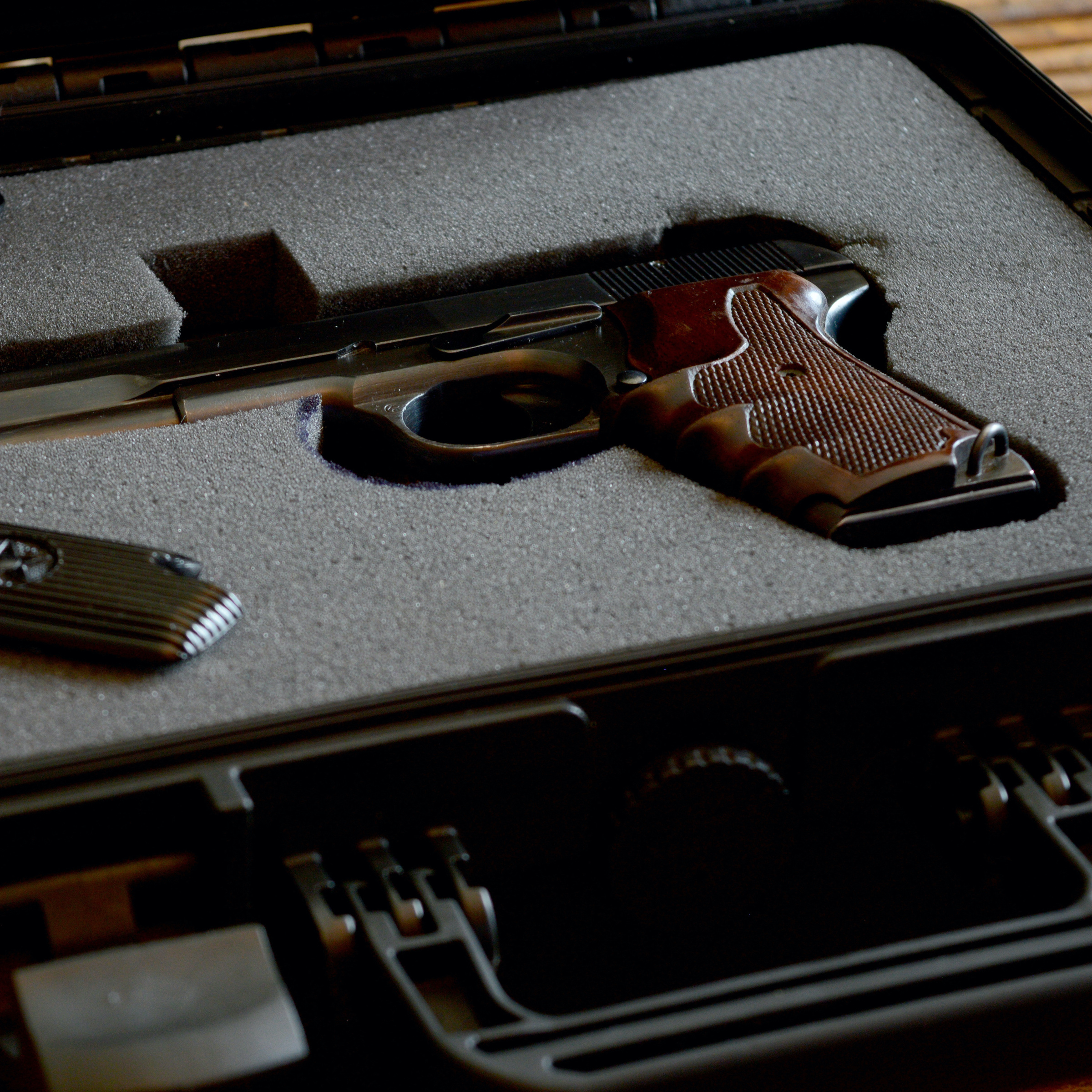 Justin Hill: Welcome to Hill Law Firm Cases, a podcast discussing real-world cases handled by Justin Hill and the Hill Law Firm. For confidentiality reasons, names and amounts of any settlements have been removed. However, the facts are real, and these are the cases we handle on a day to day basis.

Steven Lopez: Hi, I'm Steven Lopez here with Justin Hill, we are both attorneys here at the Hill Law Firm. We're going to talk today about a case that we're dealing with here at the firm, and talk about one of the laws that applies to that case, and it has to do with guns safety. We recently started working on a case, Justin, that involves gun safety. It's an unfortunate incident where a person left a loaded firearm in a place where an eight-year-old could readily access it. They ended up gaining access to that gun and losing their life. Today I thought we'd take some time and talk about gun safety and law under the Texas penal code that has to deal with not only a negligent use of a firearm, but what can happen when negligently using that firearm leads to the wrongful death of a child.

Justin Hill: Yes, I think that's a good point for us to move into some of the things that we get calls about at the law firm. Because we'll get calls where people just want advice on the law, which we can't really give advice on the law if we don't represent somebody. We can touch on some of the big parts of the law that we see in our day to day practice, and that's what you're doing here today. In light of this case you just filed up in Bell County. I think it's a perfect time to talk about,firearm safety, and the laws you're going to talk about. Because you yourself, you're kind of a gun guy and a gun owner.

Steven: I don't know if I'd call myself a gun guy. I do own a couple of firearms, I do hold a concealed handgun license. I'm not the person that carries a gun around every single day. I do have a license to do that, I do believe in the second amendment. I also believe that with owning a gun, and especially if you have a concealed handgun license that, that is an awesome responsibility. It comes with just a lot of responsibility in how you use and operate those firearms.

Justin: Yes, I never got my CHL. It's interesting to me to go to the class, but I've always thought it's either going to get stolen. Somebody else is going to get their hands on it. I have some guns, but I didn't mean you were crazy about guns, but you have guns. You're a supporter of the second amendment. You have your CHL. You've been to the class where they teach you a lot about these laws.

Even in light of that, the case where we're suing the man who had a CHL, and still just ignored some of these very important laws. What's the big criminal law we're going to be talking about in that case as we move forward on that Bell County case? So Our listeners can understand, and specifically our gun-owning listeners can understand that there's a lot of responsibilities about owning a gun outside of just what you're taught in the class.

Steven: The law we're going to be talking about today is Texas penal code section 46.13. That's a law that deals with where you can leave your gun when children are around. Just the plain text of the law says, "A person commits an offense if a child gains access to a readily dischargeable firearm, and the person with criminal negligence fails to secure the firearm or left the firearm in a place to which the person knew, or should have known the child would gain access."

Now that's a lot of legal words we're going to go ahead and break that down for our listeners, and for people who own guns and have them around the house. First of all, Texas penal code 46.13 is a violation of that code is a class C misdemeanor, but if someone gets hurt, if the child hurts themselves seriously or causes death either to themselves or anybody else that becomes a class A misdemeanor.

Justin: Which is still crazy to me that it's not a felony if you leave a gun and a child ends up harming themselves or somebody else. That's what Texas has decided and they have said, "Look, it's going to be the lowest misdemeanor just by doing it, and we'll make it the worst misdemeanor if you end up-- it leads to somebody getting seriously injured or killed."

Steven: Yes, I was pretty shocked when we got into this case and started getting into this law that it was only a misdemeanor, myself. A violation of that law if you're caught breaking that law, that also opens you up to civil liability, which is what we're dealing with here and in our case. This law applies to children. It's a criminal offense if a child gains access.

Under this law, a child is anybody under 17 years of age, under 17 years of age. If a 17-year-old gains access to a gun that you leave laying around the house, this law doesn't necessarily apply. It doesn't apply at all. We break this law if a child gains access to what is called a readily dischargeable firearm. Under the law, that means quite simply, a loaded weapon. Doesn't matter if the gun is chambered or not. If there's ammo in that gun, that's considered a readily dischargeable firearm under the law. That's what that means under that law.

Justin: Under 17, a gun that's loaded and the person has to be essentially negligent the way we about it, in terms of this, to allow it around for a child. Which means they didn't act like a reasonably prudent gun owner would in those circumstances. Fair?

Steven: Fair. It's a crime if it's readily accessible, or you fail to secure the firearm. There's various ways, of course, gun owners out there know that there's many ways and many precautions you can take for securing a firearm. You just simply don't load the weapon. There's trigger locks, you put the weapon in a safe. You really have to be criminally negligent in order to be breaking this law. It's egregious in my mind to leave a loaded weapon in a place where you know, or should have known that a child can gain access to it.

Justin: There are some carve-outs to this statute, like if somebody had broken into your house you're not responsible. If they harm themselves while defending the home, there's some issues there too. Generally, what the Texas law is telling us is that you can be criminally prosecuted if you leave a gun that's fireable within access or where a child can get to it, and that you weren't acting reasonably.

I was thinking about this, my dad would put his guns at the very top of his closet. Whether they're loaded or not, that's probably reasonable whenever I was a little kid and would have to go way out of my way to try to dig this out of the top of a closet. In our case, we're dealing with a guy who left it on a coffee table readily accessible to a very young child. He rightfully has been arrested so that the criminal system can work that out.

Steven: Yes, that's what happened in that case. I don't know it's splitting hairs with you. I don't know that every case is fact-intensive, indifferent. That would be something that we would argue about it in the civil side of the case of whether leaving a gun at the top of a closet is reasonable. I think this law, the Texas penal code has in mind laws that go beyond that, trigger locks, safes, really securing a firearm, especially a loaded firearm in a civil case. I wouldn't bat an eye at arguing the reasonableness of leaving a loaded firearm, even in a closet or anywhere where a child can climb up and get it.

Justin: I wouldn't either, but at least in those cases, somebody would have a basis to say they thought they were being reasonable. Which that's what it comes down to in the criminal case, where are you acting reasonably and to some extent, if you tried, you have that argument. I'm not saying that would be reasonable. I think he put a gun in a safe if there's children around or really anybody around, I think guns need to be behind a lock.

Justin: That's going to do it for this episode. We're going to do a Texas law in 10 segments led by Steven. I'm going to be his Ed McMahon on some of these. We consider ourselves a boutique personal injury law firm in San Antonio. We deal with laws that some firms don't, in cases that some firms don't. We want to add a little flavor and give a little education about some of the laws we're dealing with. We'll see you on the next episode.