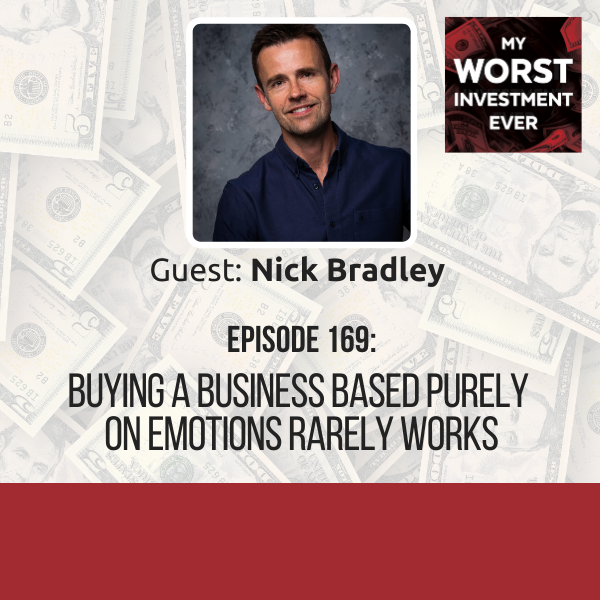 Nick Bradley is a business scale up specialist helping entrepreneurs grow their businesses to create freedom, build wealth, achieve their mission, and live life more on their terms. He is the founder of the Fielding Group, a growth accelerator that helps companies improve business performance. He works with private equity firms across the UK and the US, leading business turnarounds, mergers, acquisitions, and scale-ups.

Over the last decade, he has bought, built, and sold multiple businesses creating significant value for shareholders. Nick is also the host of UK’s number one business podcast on iTunes, Scale Up Your Business. His mission is to help bring an entrepreneurial skillset and mindset to people all over the world as a driving force of progression and prosperity.

Originally from Australia, Nick is a dedicated family man who has a strong background in physical fitness, having completed 67 marathons and 24 ultramarathons worldwide. He's also a qualified personal trainer and performance coach.

“The worst time to make an investment decision is when it's based purely on emotions because you're not seeing the bigger picture, and you're not being objective.”

Nick’s entrepreneurial journey started when he was 18 years old when he started a gym. Personal training back in the late 80s was still a new idea, so in some ways, he was innovating, but he felt the need to get out of the environment. So he sold that business to a friend for a little bit of cash, packed up all his belongings, and left the little town of Adelaide, South Australia. He ended up in Sydney with about a month's worth of cash.

Jumping into the corporate world

Left with barely any money to survive on and about to move back to Adelaide, he was lucky enough to bag a job as marketing manager of Men's Health magazine. His new job earned him some good money. He loved his job and did everything he could to get ahead in his career as quickly as possible. Sometimes he had to step on people to get to where he needed to get.

Board member before he was 30

Nick’s drive to succeed saw him become a board director of a company in the UK before he was 30. So he left Sydney and moved to the UK after he got transferred there by one of the media companies he was working for.

All this corporate work was stressing him up. One night he was quite stressed and wasn't feeling great. He was taking some of that stress out on his young family as well. So this night, he had a whole heap of stuff going on with the company he was working in. The stress had him grinding his teeth in his sleep. He woke up and realized that he had cracked all his back teeth on the right side. He had ground his teeth right down to the point where the pressure of the clinch broke his teeth.

This woke Nick up to the reality that he couldn’t continue working his job. He wasn’t feeling fulfilled, and he was not the person he wanted to be. He went for a long run, and when he got back home, he had made up his mind to stop working for the private equity firm and instead buy a business.

Excited to buy a business

There was someone who Nick knew by association, who was trying to retire from their business, and they and their business partner offered him to buy into the business as a management buy-in (MBI).

The stress of his corporate job had him looking for something where he could jump ship. So buying an existing business was a decision he made because, at the time, he badly wanted to get out of what he was doing.

He invested a six-figure sum of money in buying the business. The sellers decided to do a seller-financed agreement so that he’d be paying off the remainder over three years. His ownership stake would increase over time as he continued to pay the price of the business.

He was too excited to get out of the corporate world that he never thought of the factors to consider when buying a business. He didn’t even give the sale agreement much thought. He signed the dotted part without doing his due diligence. What he didn’t see coming was the fact that this agreement meant him coming in essentially as an employee, again, which he wanted to avoid by quitting his job.

After a while, Nick realized that he had made the decision to buy a business from an emotional state, and now everything was coming down on him hard.

First, the person who he thought he knew, turns out he didn't know him very well. Second, the two business owners didn’t quite exactly intend to sell the business and let go of their management role. So even though Nick had put some money into the business, they weren't prepared to let him run the business.

Sacked from his own business

There were a lot of fighting and disagreements. One day, at a board meeting, there was quite a huge disagreement, and the two owners decided to sack him, and they weren't prepared to give back his share of the money he invested.

Nick went to court to try and get some cash back. He also had to hustle to get another job, which he did very quickly because he had a good network. Luckily, he managed to get some of his investment back. To date, this remains his worst investment ever.

Emotions and decisions should never go hand in hand

Making decisions that are purely based on your emotions is never a good idea. Not to say you shouldn't think about things from both your heart and head perspective, you need to connect with both. But if you're in a position where you're looking for a way out, that very emotion prevents you from seeing the bigger picture and being objective.

Do your due diligence

Before diving into any investment, do your due diligence. You've got to do your homework. Look for multiple insights and pieces of information so you can make a truly informed decision.

Failure is not the end

Don’t treat failure as the end of your investment plans; it's the beginning. It is the origin of what you become in the future, so don’t let failure stop you. Just pick yourself up, get going again, learn from the experience, grow and become better from it.

Be wary of debt

Debt is the number one risk factor in business because if something goes wrong, you can quickly lose control of your business. Avoid debt for as long as you can.

Change is internal, not external

Whenever you are going through emotional turmoil, moving to another city, state, or even country won’t change what you’re going through. True change starts from within. When you're in emotional turmoil, and you're making a decision, thinking that the decision is going to bring you to another place, unfortunately, you'll be bringing yourself with you. When your emotions aren't right, you get out of balance.

Be on the right side of the deal

Make sure that you get the right terms in a deal. Don't rush into something without understanding the terms of the deal fully; otherwise, you may end up making your worst investment.

Professionals are the worst decision-makers

Professionals are the worst in the areas that they're experts in. Most brokers or investors end up risking it all on some overconfident bet. This is because they tend to feel confident in what they’re doing and end up not doing their due diligence in their deals.

If you've got a big opportunity, and even if someone's pressuring you, you've got to push back on that and give yourself an extra few days if you need it, whatever the time frame is. Then write down the reasons why this is a good investment as well as the reasons why it's not.

Surround yourself with people who are trying to do the same thing. Such people can give you a sounding board to make sure you make sound investment decisions whether you go ahead with the investment or not.

Nick and his business partner have an objective to have no less than five acquisitions on the cards in the next 12 months. Their vision for the next 10 years is to have over 100 million invested assets in businesses that they own.