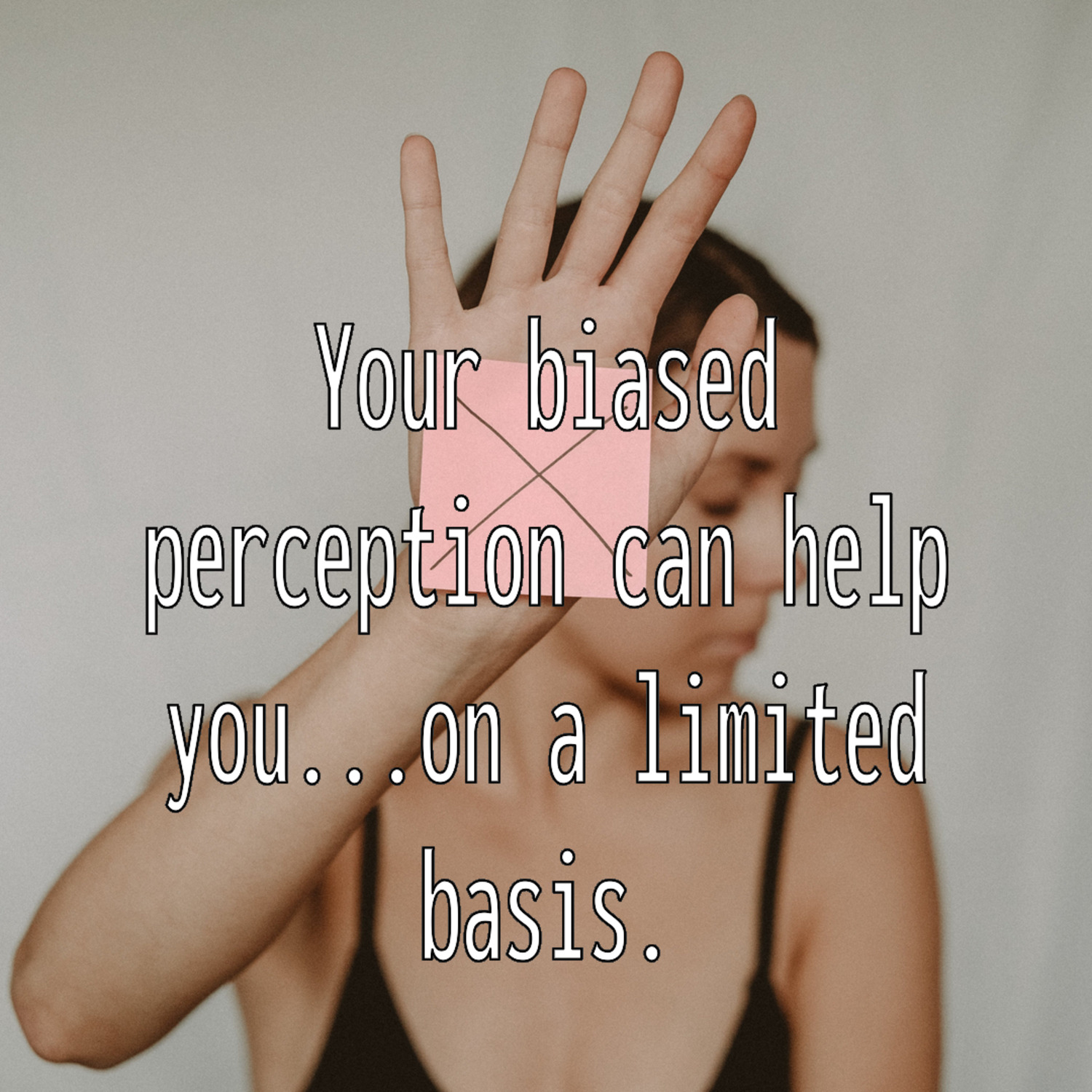 Your perception is biased. Understanding the world around you is probably biased because of how the brain jumps to conclusions. These types of jumps are called cognitive biases. They seek to create a story out of as little information as possible, to avoid uncertainty. Battling cognitive biases involves telling stories in reverse, slowing down, and shifting your focus to questions instead of declaratory statements.

Another way we should deviate from our initial instinct is our perception.

Perception is similar to perspective, in that they are both about the information you take in from an event or experience. But while perspective is about our experiences and they obstruct clear thinking, perception is about how what you see or hear is interpreted in a way that doesn’t represent reality anymore. These are usually known as cognitive biases. Perspective has your own unique filter, while perception has your brain’s shortcomings’ filter on it.

Yet another way in which our brains and instincts fail us? You don’t even know half of it!

Cognitive biases are how the brain seeks the path of least resistance and energy preservation. It seeks to jump to conclusions and limit information in the interest of speed over accuracy. It takes what you see and hear, however brief, and assembles a complete story.

You can imagine how this might lead to a lack of clarity of thought. If you want to take the quickest and easiest path to a destination, it means you are going to be missing a whole lot. It’s as if the brain handicaps itself and covers one of its eyes to create a picture more quickly by having only half the visual field to process.

And yet, they do have their useful bits. Occasionally that eye patch is beneficial. There are three main instances where this is the case.

When there’s too much information to absorb. We live in a time when there’s a deluge of facts, data, statistics, stories, accounts—basically too much information. The overload can be exhausting and usually contains at least some bits of info that are of no use to us whatsoever. We can become overwhelmed and paralyzed. So, it becomes necessary to filter out the relevant information and retain only the parts that we can use. This is where schemas and heuristics we discussed earlier come in as well.

Cognitive bias can help reinforce that filter, and it does so in several ways. The brain tends to latch on to the most repeated or recently activated memories. It also tends to remember events or people that are strange or humorous, and notices more strongly when something has changed.

Now, what do we do with that limited amount of notable information? The brain tries to find a story. But, how can you build an accurate story with a beginning, an ending, and a few bits here and there in the middle?

When we need to act quickly. Sometimes, we’re in a crunch. Decisions need to be made quickly. If we let ourselves get bogged down by inactivity or don’t react swiftly enough, we can fall behind or risk our survival. Cognitive biases can be helpful in that regard—although, again, not without potential hazards.

Cognitive biases cause us to fall back on the most familiar and comfortable things to us. We rely on the most immediate and available resources. We focus on the present situation, preferring to ponder that instead of the past or the future. We concentrate on things we can more easily relate to and eschew tools or assets that don’t make much sense. We strongly prefer solutions that look simple, thorough, and relatively risk-free, rather than overly complicated, vague, or unsafe answers.

This may be a perfectly reasonable course of action when the clock's running low. And it’s almost entirely fueled by cognitive bias. But since it comes fast and furious, there might be some clean-up you’ll have to do once everything’s settled down—but perhaps that is not always the most important priority. It’s similar to a preference for asking for forgiveness versus asking for permission in the context of doing something you shouldn’t be doing.

When we’re deciding what we need to remember for the future. The final scene in which cognitive bias might be of assistance concerns memory. If only fragments of our constant information overload are useful to us now, then even less of it will be relevant to us in the days and years to come. So again, we have to cherry-pick the things and details that we remember.

This process involves reduction. We’ll discard some of the finer specifics of things and events and form broader, more general memories. We trim some smaller events off and reshape them into a few basic key points. Maybe we’ll pick out only a couple of events and elevate them so they represent the whole experience.

In processing these new memories, our cognitive bias again defers to those most meaningful or familiar to the brain. It will also “edit” certain memories, so they become more accessible to us, but specific details might accidentally be removed or inserted in this process, so we remember it slightly differently from how it happened.

Your biased perception can help you on a limited basis, but they are decidedly not the path to smarter thinking. Thus, we delve into three of the most prominent biases to understand how to battle them. Remember, they all seek to abbreviate information for easy decision-making and increased retention—not accuracy.

The availability heuristic. The brain tends to prefer information that’s most readily available or comes to awareness rapidly. If something simply comes to mind swiftly or is more memorable, we tend to attach an importance to it that it might not really deserve. It excludes supporting information that might be important to consider and countering details that might be used to argue against it.

For example, you might see the topic “tsunamis” trending on Twitter. You follow a couple of links to recent news reports that say tsunamis are expected to happen more often in the near future. The reports are compelling. You feel a little nervous. You become worried that you’ll be a tsunami victim. You start thinking that you haven’t prepared enough. You get to the point where you think it’s inevitable that someday you’ll get swallowed up by a tsunami, and there’s nothing you can do about it.

In all this concern, you temporarily forget that you live in Kansas, a landlocked state in the middle of the United States where tsunamis never happen. Tsunamis require a large body of water and are best known for small island nations.

That’s the availability heuristic in a nutshell: you got spooked by a bunch of instantly accessible information that made you forget the fact that the chances of you getting swept away by a tsunami in Kansas are virtually impossible. When asked about your fears, you answer “tsunamis” and ignore the rash of home burglaries that might be occurring or that you are in danger of losing your job. Just because something is available, or notable does not mean it is important or representative.

Gambler’s fallacy. This common cognitive bias magnifies the importance of past events in predicting future outcomes. The bias dictates that conditions and previous results point to the inevitability of something happening down the road—when in reality, each subsequent event is independent of the previous. This bias wants to create a cause-and-effect relationship where none exists. For instance, just because a coin has flipped to the heads side one hundred times in a row doesn’t mean that it’s more likely for the next flip to be to the tails side. There is no relationship between each flip.

This particular cognitive bias is called the “gambler’s fallacy” because it’s responsible for many out-of-control gambling addictions. Somebody betting on a football game may say a certain side will win because they’ve always done so before, or because they’ve lost so many times that they are due for a win: “The Packers are due a win this week after all the tough losses, and they are going to get it against the Lions!”

Forget that this guy would be a terrible gambler if that’s the information he used to lay a bet, but it illustrates the point. The history of the Packers-Lions rivalry doesn’t concern how well those teams have played in recent years. The losses of the Packers in recent weeks doesn’t mean their turn for a win is coming. Just because something happened doesn’t mean something else will happen.

Say you’re shopping for home theatre equipment. You go to a showroom and see a couple different models. One’s extremely expensive, features a lot of bells and whistles, and takes up a lot of space. The other’s a bit cheaper and smaller, but to the naked ear, doesn’t seem to be much different in terms of quality.

If you employed post-purchase rationalization, you’d convince yourself that you made the right decision, that it’s what you wanted to do all along. You tell yourself that you can indeed hear the difference in sound, and you do indeed need fifteen different plugs and ports. You might know deep down inside that you went overboard, but that knowledge makes you uneasy. Regret makes you feel stupid, and no one likes that. So, you talk yourself into believing that you did the right thing and got exactly what you wanted. No more regret, just eating boxed macaroni and cheese for dinner for the next two months because you spent so much on new speakers.

This type of post-anything justifying behavior extends far beyond purchases. Remember clear thinking’s biggest enemy, the ego? This is where it returns. We do this sometimes when we defend ourselves from others, but here, we are trying to convince ourselves instead of trying to convince someone else.