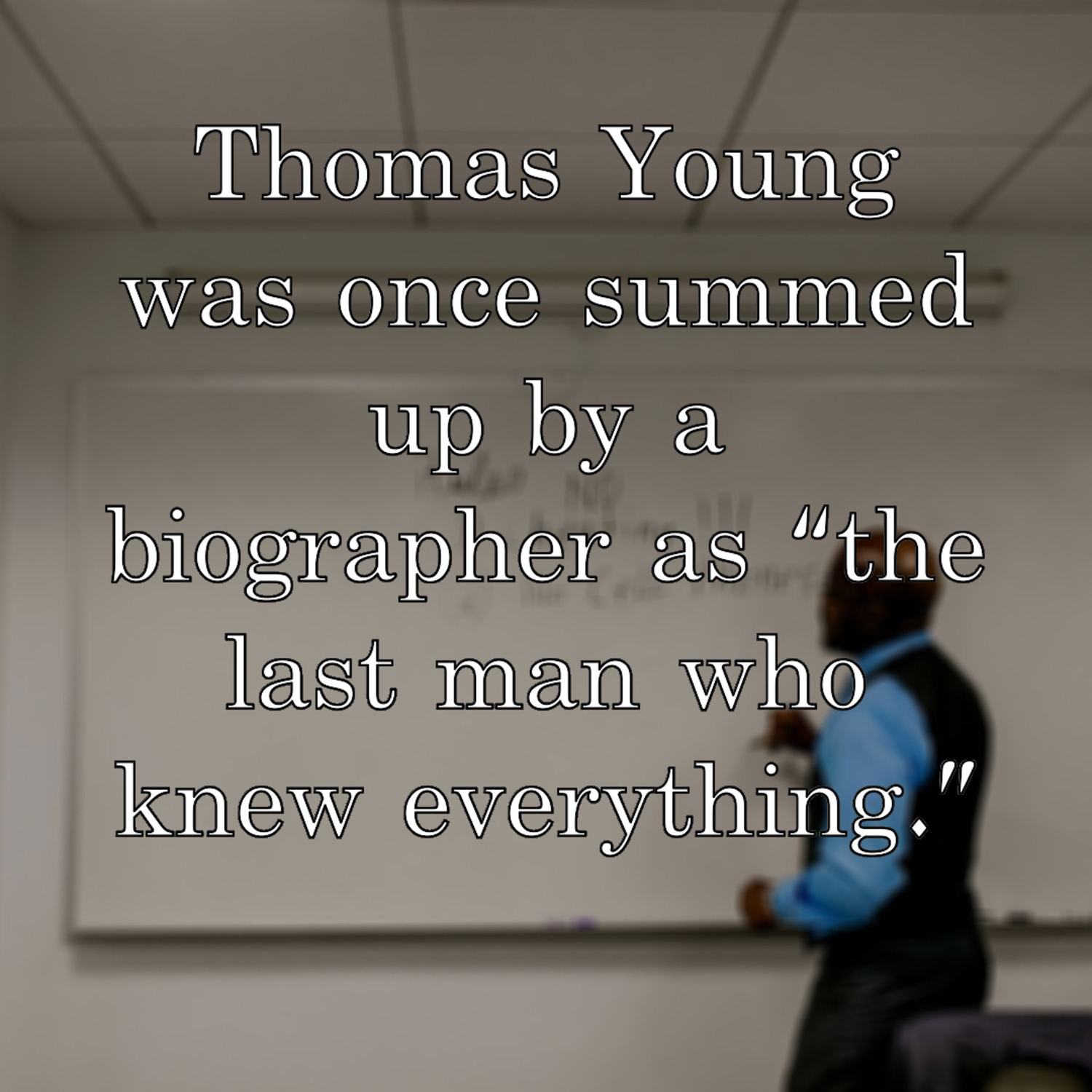 Thomas Young is a curious case, because few people know him by name, but instead know him as the one who proved Newton’s theories wrong. Obviously this required deep knowledge of physics and the scientific method. Young was also one of the main driving forces behind deciphering the Egyptian language of hieroglyphics through his work on translating the Rosetta Stone. All of this, despite his primary training as a physician.

Email the show at HollinsPodcast@NewtonMG.com or let us know what you think at http://bit.ly/hollinscomment

There is an anecdote that when young Thomas was being taught dancing, classmates found him with compass and ruler, constructing a mathematical diagram of a minuet, so as to better dance it.

He was a poster child for polymaths of his era, mastering physics, mechanics, physiology, language, music (he invented his own method for tuning musical instruments) and Egyptology and hieroglyphs.

Though his interests and achievements were many, he is often most remembered for his key contributions in the translation of the Rosetta stone.

After inheriting a granduncle’s estate, he was financially able to pursue private practice, as well as his own research and publication of medical articles.

Young was a secretary on other commissions, associations, academies and boards, overseeing projects and policies of many kinds.

By the time of his death at fifty- six, he was revered as one of the most accomplished and prolific men of his era.

Arguably Young’s most important contribution was in the now well- established wave theory of light.

The renowned double slit experiment (a foundation for much of the ground covered later in physics and quantum mechanics) was first carried out by Young, along with ripple tank demonstrations, showing that light displayed interference patterns exactly like those of water waves, suggesting its nature as a wave.

This polymath also countered Newton’s previous supposition that light was a particle.

It took many years for Young to be taken seriously, and many years more for the seeming paradox to be resolved—light is now thought of as both a wave and a particle.

Young’s other mechanical and engineering contributions include work on elasticity, stress, surface tension, capillarity and pendulum dynamics that have remained relevant in their respective fields of engineering, mathematics or physics.

Young’s primary training and early occupation was as a highly esteemed physician who somehow found time to conduct his own research and publish important medical writings and observations in haemodynamics (the study of blood’s dynamic flow through the body), consumptive diseases, astigmatism of the eye (a disease he discovered), and even devised a quick formula for determining children’s medicine dosages.

Medicine was a lifelong passion for Young, and he wrote of his medical expertise, after being criticized for some of his scientific work: "I have resolved to confine my studies and my pen to medical subjects only.

For the talents which God has not given me, I am not responsible, but those which I possess, I have hitherto cultivated and employed as diligently as my opportunities have allowed me to do; and I shall continue to apply them with assiduity, and in tranquility, to that profession which has constantly been the ultimate object of all my labors.” Linguistics.

g published a dissertation in: 1796

His most significant work, however, was in ancient Egyptian hieroglyphics, and he translated entirely one section (the “demotic” script) of the Rosetta stone, identifying that it consisted of both ideographic and phonetic signs.

He also wrote on the history of Christianity in Nubia and, despite his own clear religious convictions, was an impartial observer.

Though Young competed bitterly with others in his field and there was some controversy associated with his findings, his overall contributions to this area are undeniable.

In surveying Young’s range of interests, we are given the impression of a man who pursued his curiosities despite pushback, criticism or disagreement, and who seemed to draw genuine satisfaction and joy from expanding his considerable mental prowess to the fullest.

The word “genius” certainly seems appropriate, but it’s also clear that Young was an energetic, hard-working and dynamic individual who accomplished much in his relatively short life.