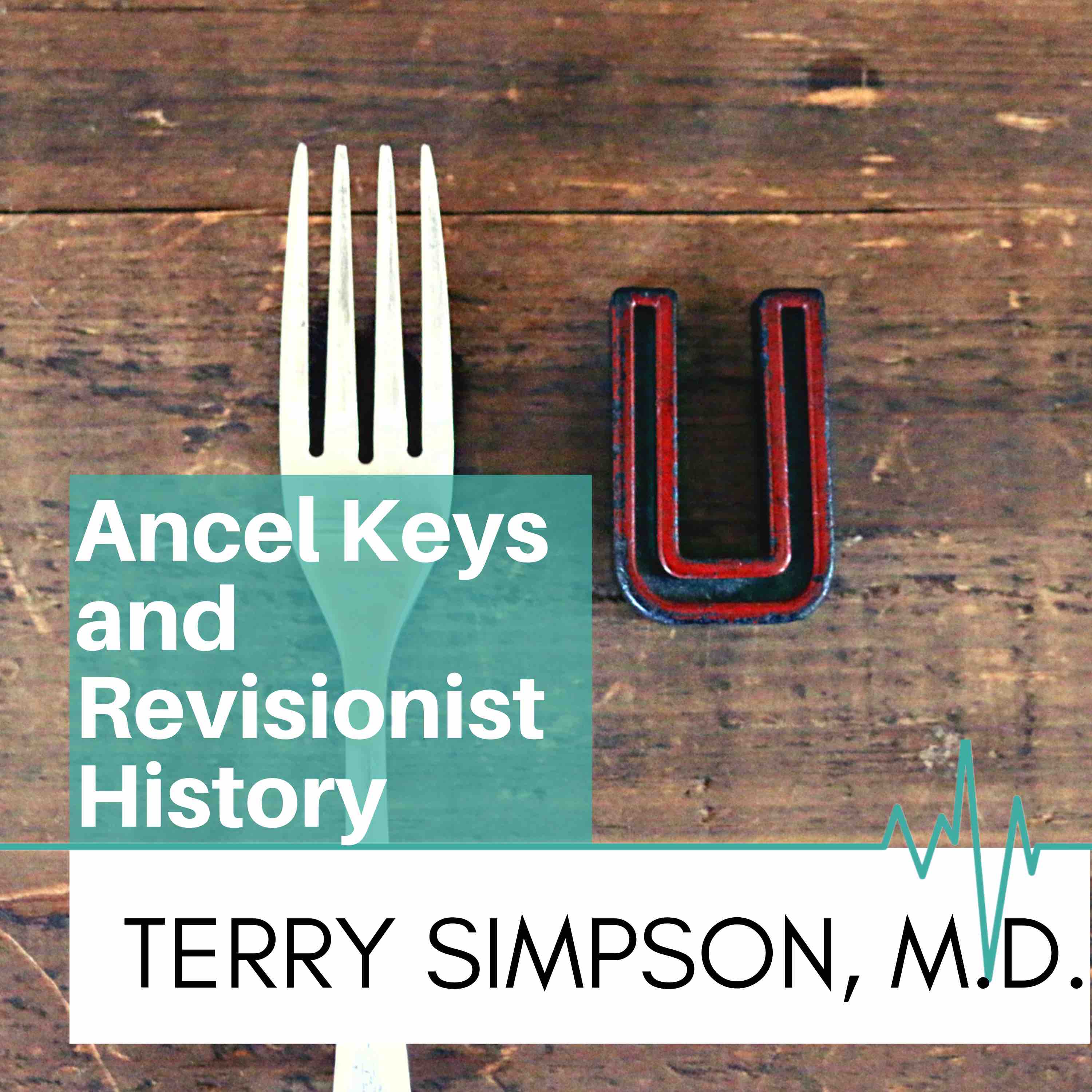 Was Ancel Keys responsible for the modern epidemic of obesity?

If you have read any low carb blog lately, you would think so.

Their revisionist history is broken down to this:

You will find versions of this in blogs, books, and videos.  Low-carb bloggers plagiarize one another. Nor have they never the primary source material.

The Mediterranean Diet Founder and the Study

Keys is the founder of the Mediterranean Diet. He was a pioneer physiologist, one of the first to show that diet was an important component of heart disease.

In the 1950's few considered diet an important component of heart disease.

"In 1952 when Margaret and I were making surveys in Naples and then Madrid. It seemed quite clear that there was some relationship between diet and the incidence of coronary heart disease. Rich people had different diets and different blood cholesterols, and they had the only heart attacks in town. When those findings were written up and presented at a meeting in Amsterdam, some people were impressed and some didn't believe anything about it. " - Ancel Keys

This early observation by Keys  was the impetus for  the Seven Country Study.

That diet was responsible for heart disease was contrary to the prevailing theory: in the 1950's heart disease was hypothesized to be phenomenon of aging.  Dr. Keys meticulous research revealed the strong correlation between heart disease and a diet rich in saturated fat.

The graph below is a result of looking at macro dietary statistics of a country compared with death rates from heart disease. Keys presented this data at a WHO meeting in the early 1950's. The conclusion about fat and heart disease,  was met with a great deal of skepticism. Diet was not considered a factor in heart disease.

While this data points to a potential cause, to examine this hypothesis one must perform a cohort study.

Some assume that Keys collected country wide data about diet and heart disease, but he did not. Bloggers probably assume this based on this graph, as well as the name, Seven Countries Study. But the Seven Country Study was far more precise. The Study was a Cohort type study.

A cohort study follows subjects for a long period of time. The Seven Countries Study followed over 12,000 men for nearly 50 years.

Of all the factors examined, saturated fat and blood cholesterol were most correlated with  heart disease.

One of the more common myths about the Seven Country Study was that sugar was not examined. In fact, sugar was examined as an independent dietary factor. Sugar was not an primary variable for heart disease, unless combined with saturated fat.

The low-carb bloggers assume that Keys only tested those countries whose diet was rich in carbs, and low in fat. Keys chose his cohorts based on different diets, from those who were low fat, to high fat. Total fat, as it turns out, was not a factor for heart disease. Greeks had 40% of their dietary calories from fat but a low heart disease rate.Most of their fat came from monounsaturated fat,  olive oil.

The Finland cohort was chosen precisely because of their high fat diet:

"Loggers’ lunches, even today, are things of wonder, unsurpassed in caloric density: Large hunks of meat are suspended in congealed fat, enveloped in a dark bread loaf fully permeated by fat. The whole – at 250 grams of fat and well over 2,000 calories – is packaged in aluminum foil and tied with a ribbon. This hefty fare is preceded by a breakfast of fish soup, containing fifty percent butter fat calories and several grams of salt. The evening meal provides the rest of the 6,000 calories the logger needs to work outdoors all day." - Henry Blackburn

Finland had a high level of coronary heart disease. The Fins also have a very active lifestyle, which didn't prevent them from the ravages of atherosclerosis.

Reversing the Diets - Fins to Italians

"Though the picture in Finland confirms the major causal hypothesis about the role of dietary saturated fatty acids, a basic issue remains, as exposed in a practical dietary experiment completed some years ago. Can the picture be changed? East Finns were placed on an Italian diet and Italian farmers on a Finnish diet. As in the black and white prisoners that Keys and John Brock of Capetown studied in Southern Africa forty years before; the groups rapidly approached the blood lipid characteristics of those in the adopted eating pattern." - Henry Blackburn

The Fins remind me of the Cross-Fit types: young, seemingly healthy and eating a lot of fat. Then struck down by heart disease as a result of poor dietary choices.

Does the French Paradox refute the work of The Seven Country Study and Dr. Keys?  The paradox is that France has a low rate of heart disease and a high consumption of saturated fat.

The French Paradox makes great debate, but isn't supported by the data. Finally, the  French diet was essentially Mediterranean through the mid 1970's, not a diet high in saturated fat.

Exclusion of other Countries

No country was excluded from the investigation of heart disease and diet.

The diets of the US and Finish cohorts showed there was more than just correlation between diet and heart disease.

Did Keys cherry pick the data? Knowing that countries that didn't agree with his thesis, did Keys exclude those countries?

Here is data from 22 counties regarding diet and disease published in 1957 (reference).  Many low-carb bloggers have reproduced this graph. They conclude that Keys left out countries whose data would be contrary to his hypothesis. They also conclude that this graph, does not show correlation between fat and heart disease.  In fact, both assumptions are incorrect.

No country was left out of the study. In fact, some cohorts were studied precisely because they had high fat diets. High fat diet combined with an active lifestyle (today we call this "metabolically healthy") did not decrease heart disease. The data from Finland showed as "metabolically healthy" as the loggers were, they suffered from an alarming rate of sudden death from cardiovascular disease.

The Seven Country study WAS NOT a study of  broad dietary habits of people from those seven countries. Rather, it was a study of specific cohorts, from villages in those countries.

Studying those cohorts involved meticulously recording their diet (even weighing portions), taking blood samples, physical examinations, and recording their lifestyle. The result was the strong correlation between saturated fat and blood cholesterol to heart disease.

No country was excluded from involvement.

Cohorts were chosen because they had different dietary patterns. This demonstrated the effect of diet on the heart health over time.

Sugar was studied as an independent variable and was not found to be associated with an increased risk of heart disease. Sugar combined with saturated fat was found to be impactful.

In 1977 the United States guidelines for diet stated "consume only as much energy as you expend, eat more naturally occurring sugars, consume more fruits and vegetables and go easy on eggs and butter. "  The 1980 guidelines admonished people to cut down on saturated fat and sugars. Were those guidelines were followed the United States would not have an obesity epidemic.

Low Carb bloggers plagiarize one another freely. But those bloggers clearly do not read the primary sources.

The diet that provides optimal cardiovascular health continues to be optimized .

The Mediterranean Diet has over 13,000 publications about it in the last decade. It is consistently rated as the number one diet in surveys of physicians, nutrition scientists, and dieticians.

Since the Seven Country study, multiple other studies of the Mediterranean diet have been reported showing:

Keys was not responsible for the modern epidemic of metabolic syndrome, insulin resistance, diabetes, obesity and heart disease. But The Mediterranean diet might just prove a path away from it.