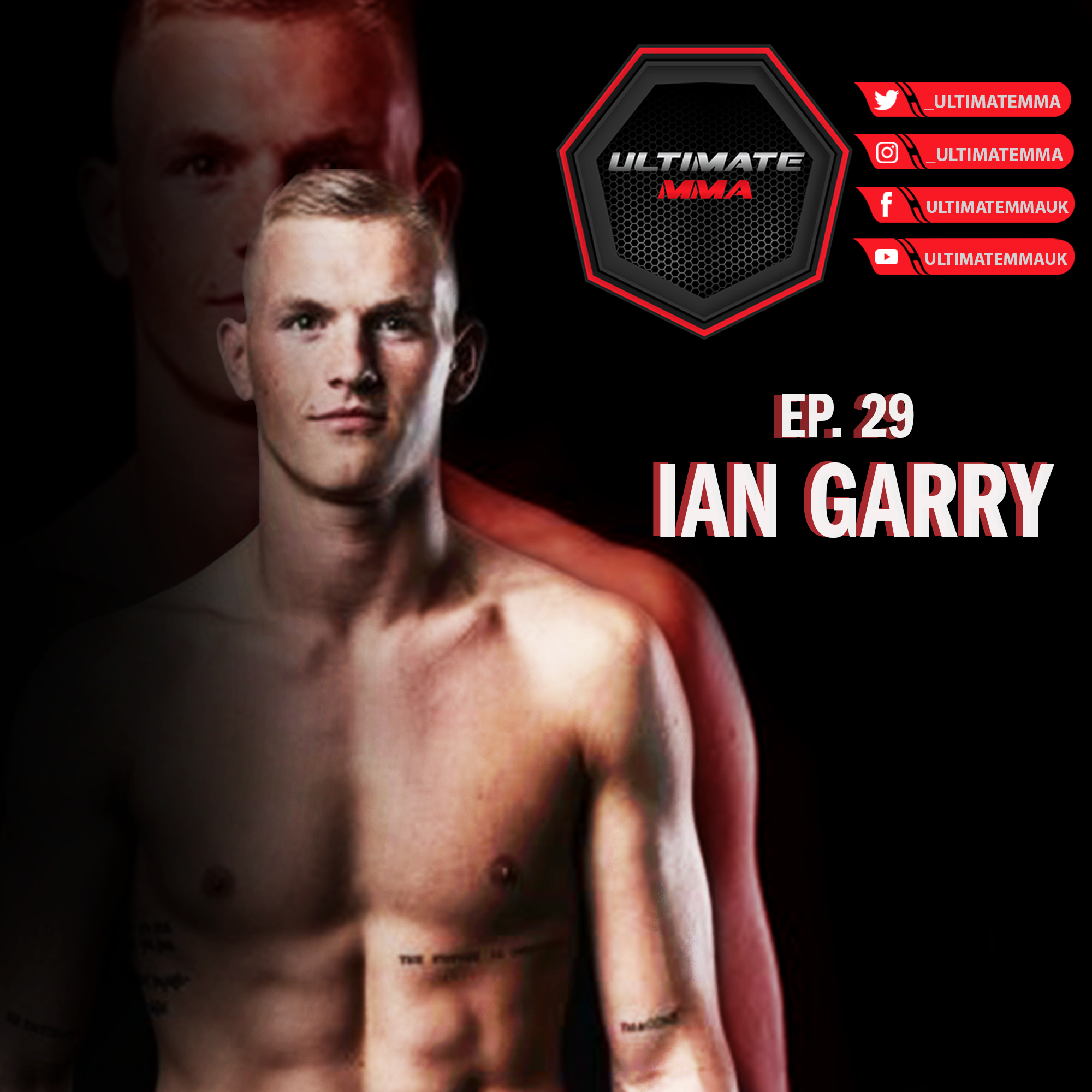 Welcome back fight fans to another episode of the Ultimate MMA podcast. I hope you're all well. We're going to be sinking our teeth as always into the world of MMA this week, talking UFC last weekend - eye pokes - UFC this weekend, and the Cage Warriors trilogy. As always I'm your host Jake Jones, and my co-host Sean Gilley will be joining me later on in the show. However, we have no time to ponder because we are very, very lucky to have another guest on the show this week. He is the undisputed future of MMA, the king of the cage. He is one of the most up and coming stars in the entire sport. He fights for his shot at the title tomorrow night on Cage Warriors 121. It's none other than "The Future" Ian Garry. How are things man?

How is things man, how are you? Thanks for having me on.

Very very well, no thank you for joining mate, I can't believe it. For those listening this is going to be coming out tomorrow, so Ian will be fighting tonight for you guys, but thank you for taking the time out of the day man, it's absolutely awesome. It's an honour to have you on, as always, let's get straight into it. You weighed in today - tell me how you're feeling right now man?

Good man, just a little bit tired. I mean you're a bit beat down from the camp and just the weight cuts it's just about sitting around. I'm currently sat in bed and chilling out, watching a bit of Suits on Netflix and just drinking some water and eating some snacks, trying to get the rehydration. Getting the body to where it should be for tomorrow so I can go in there and do me, have fun and look good.

Absolutely man. Talking about your weight cut you made it perfectly at 170. Your opponent made weight at 170.9, so very close to the margin there. Now that you've got to size him up a little bit, we were just speaking about a second ago, the height difference is there. How are you feeling about that?

Mate, look, it doesn't matter if he was fucking 20 kilos heavier than me, if he's standing across the cage from me, I'm going to go in there and do my job. But look, I'm completely confident as always. I feel like I'm gonna go in there and just going to dominate, be bigger and stronger. I just, I don't see where I lose.

How's this weight cut been? Everything gone well?

Really good, yeah really good. I've been focussing a lot on the gym, I've been trying to get bigger and stronger, just purely because I know I can get more muscle and I've got more muscle now coming into this fight. So for example when I was doing the water cut it just flew off me, as opposed to other times where I was just a bit softer. So I'm going in here now with a bigger frame, more muscle, I'm going to go in and put on a show, and show everybody that I'm even more dangerous than the last time they saw me.

Absolutely. Now without giving too much away about your game plan, since your debut fight you have finished every one of your opponents. Is that the same goal this week? Is there anything you're particularly looking to do?

That is always the goal, but I am a bit different to people as in I won't hunt. My goal in fights is to break someone; to figure out where they don't want to be, what makes them uncomfortable, take them to that place and break them physically and mentally and make them want to quit, and that's exactly what I want to do in this fight. I'm going to go in there, take my time, piece him up. I imagine he's probably going to try grab a hold of me, because if he tries to stand at me he's stupid, but yeah I imagine he's going to come in, try and grab a hold of me. I'll frame off, I'm gonna do it come on, surely you knew that was gonna happen? You knew I was gonna knock you if you try and take me down, piece him up, and then once I put him on the back foot and I think that's him done. I think he's good on the front foot, but when you put him on his defence on the back foot he's not very good, so once I hit him with the jab and stick him on the back foot that's it, I think the fight will be finished. Whether it's in the first, second or third round I don't care, but I do think I'll finish him. And if I don't, I don't really care, I'm going to go in there and absolutely dismantle him. I'm gonna pick him apart, completely outskill him, be like "this guy was in the UFC and look how better than him I am?"

Yeah, well this is something me and Nate Wood spoke about the other day. Nate's backing you to win this entire tournament, to take that title.

Well absolutely, I'm on saying this as well, but Nate was saying about [Rostem] Akman that's coming off two losses, cut by the UFC, his confidence is not going to be at its highest, whereas someone like yourself - coming up against you, and I don't think we've seen someone with as much confidence. Man, it's going to be a crazy kind of... a massive difference between two very different mentalities. What do you think of Akman as a fighter? His skill set in general?

Absolutely. You mentioned a second ago that he's kind of well-rounded but not particularly special at anything, and you kind of see this in his previous opponents. You had, this is going to be a hard one to say, [Sergey] Khandozhko, so 26-5-1 which is an impressive record, and then Jake Matthews. Obviously we all know Jake Matthews, a good fighter as well but Akman has come up short in them, he hasn't been able to take his chance. Now, yourself though, after this the title shot will be yours. You've said you want [Jack] Grant in that. If you get that title, your confidence is consistently rising higher because, mate, it is going to be the UFC for you and you're going to have a different impression to what Akman's had, and a different story to how he's come into it. When you said you wanted Jack Grant in the next bout, is that because you think he'll win against his opponent? God I forgot his name which is absolutely...

Yes, Fleminas. Mate, the Lithuanian Train that's mad. However, is that because you think he's definitely going to beat Fleminas? Or, is it because that's more of a challenge for yourself?

Well I think both of those things are true. I think he will win, and I do think he's better than Fleminas. I think he's more well-rounded than Fleminas and I think he's going to win the fight. I know the two lads have chemistry, or like they used to train together, so I know they're no stranger to each other, but I just think Jack's a better fighter. There's no other way to look at it. Jack will find a way to finish the fight, I think it will be me and Jack in the final. And I like Jack a lot, but I'm absolutely not going to care if he stands across that cage I'm going to fucking do my job and go out there and beat him. Just like he'll do the same thing. We were joking about it this morning.

I think one thing that is also really interesting about that final bout is that will Jack's 22nd, or even 23rd professional fight. That will be your seventh. That will be a great test because obviously you have proven every single fight that you are the real deal, and then Jack has that experience as well, but is obviously coming off a couple of losses now, so that will be really interesting if that fight can be made, if that is going to be the final, then I think that's the fight every Cage Warriors fan wants to see for the belt. We'll just have to see. Another thing that's been brought up about this tournament is the inclusion of Fleminas. Some people were confused about that because of [Mateusz] Figlak. What do you think about the decision to put Fleminas in the tournament?

Well firstly I don't think Figlak should have been in it. I don't think Fleminas should have been in it either to be absolutely honest. Where's Aaron Khalid, where's Adam Proctor? Look I've already beaten Figlak once I'm not the type of person to go and fight someone I've already fought before. That's just my opinion. How many fights on average do people who make it to the top have fights - maybe 20, 25 fights? I do not want to be going out fighting a guy I've already finished in the first round and subbed unconscious. I'd rather fight a different body. I've beaten you before, I've moved on, so for me I'm kind of happy he's not in it. He's a very good fighter and I do think he'll do very well but when I'm looking at the overall tournament, there's three guys I haven't faced. I'm like right, regardless of who I fight it's great because I'm getting a new test, a new style, a new body and that's what I want. I want to keep beating different guys. But I do think Figlak deserves to be in over Fleminas considering he beat him. I don't really know what the story is and I don't really care. I don't really give a fuck to be honest, the whole tournament is made around me. They give me a UFC guy, I beat the UFC guy, then they give me Jack Grant who fought for two world titles in Cage Warriors and lost. He comes up, he's got a lot of experience, but I'll beat Jack if he wins the fight, or I'll beat Fleminas; whoever steps in from the other side of the bracket. I'll get my belt, then I'll be like, right I've done everything I said I was going to do since day one. No-one is as surprised as me, because I've been saying it. I'm not surprised. I'll be the one sitting there going "have you none of you understood what I've been saying? I've been telling you this for two and a half years, why haven't you been fucking listening to me?". Stop saying I think this guy's going to win the fight, just listen to me. I'm trying to tell you what's happening; just sit back, relax and enjoy and go alright, yeah fair enough you was right.