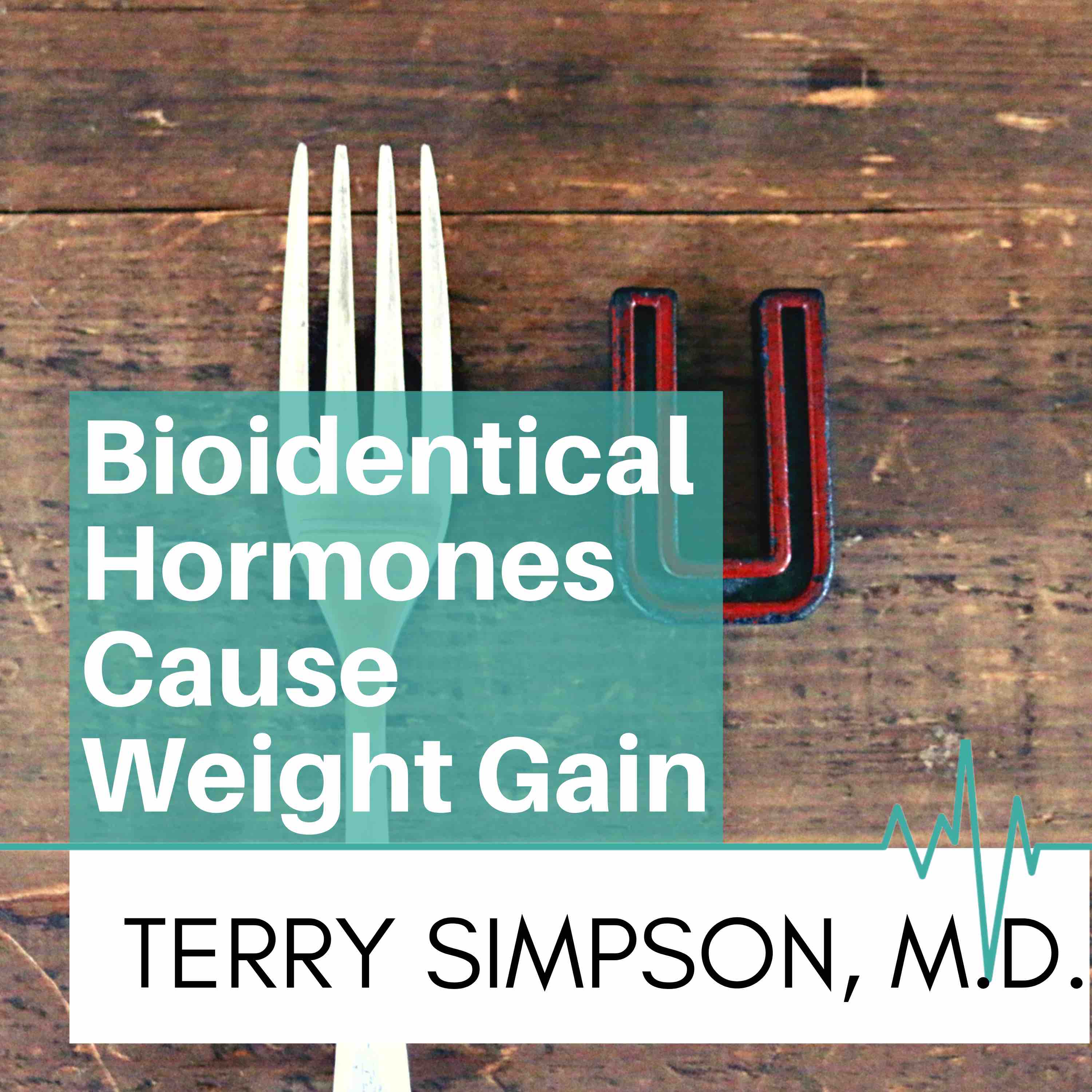 Bioidentical hormones, from whatever source, cause weight gain, not weight loss (reference) . In spite of a number of "advertisement" from providers who wish to provide you with "compounded" bioidentical hormones that propose they will cause weight loss - they don't.  This physician was not an Ob-Gyn, nor was she a board certified endocrinologist, in fact her specialty was about as far from treatment of complex menopausal hormone replacement or obesity as one could imagine.

The red flags for this clinic were (a) proposing weight loss (b) associating with a compound pharmacy (c) offering anti aging treatments (d) a provider that is not an expert in the field of endocrinology or gynecology.

Bioidentical hormones made by any compounding pharmacies do not meet rigorous FDA standards. In fact, compounded forms of bio-identical hormones are similar to supplements, and have the same issues that supplement industries have had that we have outlined previously.

With every scam there is a separation of the chaff from the wheat. Here is the current evidence about hormones and changes that occur as women enter menopause. Accepted sources for this information include The Menopause Society as well as The American College of Obstetrics and Gynecology.

Women undergoing menopause they decrease their production of certain hormones. This can lead to severe symptoms of menopause that hormone replacement therapy can alleviate. Symptoms of menopause such as hot flashes, sleep disturbances, joint aches and pains, mood changes, vaginal dryness. That is undisputed and the improvement in quality of life is why many seek hormone replacement therapy. There is also potential benefit to decreasing risk of cardiovascular disease, if started within ten years of symptoms and before the age of 60 years.

The major concern of hormone replacement therapy came from the study published in 2002, the Women’s Health Initiative, showing that hormone replacement, with the most commonly prescribed medicine, Prempro, led to an increase in heart attacks, strokes, deep venous thrombosis and pulmonary embolism as well as breast cancer.

Bioidentical hormones made by any compounding pharmacies do not meet rigorous FDA standards. In fact, compounded forms of bio-identical hormones are similar to supplements, and have the same issues that supplement industries have had that we have outlined previously.

To quote from the FDA "Compounded drugs are not FDA-approved. This means that FDA does not verify the safety or effectiveness of compounded drugs. Consumers and health professionals rely on the drug approval process for verification of safety, effectiveness, and quality. Compounded drugs also lack an FDA finding of manufacturing quality before such drugs are marketed." - from June 29, 2022 (reference here)

Throughout this blog I will be speaking of compound bioidentical hormone therapies (cBHT). There are hormone replacement pharmaceuticals that have undergone testing for toxicity, safety, efficacy and have follow up programs with the FDA to look for long-term issues, those are not cBHT. Some of those pharmaceuticals   call their products bioidentical – those are different. Unless otherwise stated, please assume that the drugs made by the compounding pharmacies do not meet quality and purity of the FDA nor do they carry the warnings. In addition, they are provided often by clinics whose physicians are not board certified in gynecology or endocrinology.

In 2013, after a major breach in sterilization led to meningitis from spinal injections made from a compounded pharmacy, new guidelines were established for better manufacturing processes and control. This is the 503B of the Food and Drug and Cosmetic Act. Some compounding pharmacies have attempted to state these were an equivalent of FDA approved drugs, but as you can see from June of 2022 reference above, this is not the case.

There is more than safety standards (as addressed in 503A and 503B) when dealing with drugs. What is not covered by those standards are efficacy, safety, clinical utility and follow up reporting for adverse events.

Filling the Need for Menopausal Symptoms

The hesitancy of some gynecologists to prescribe menopausal hormone treatment to women entering menopause greatly increased the need for women who were suffering from symptoms of menopause. To fill that role came the mass marketing of compounded “bioidentical” hormones, derived from plants.

In 2004, Suzanne Somers published “The Sexy Years: Discover the Hormone Connection” featured on Oprah and becoming an immediate best seller. Other books written by physicians provided more fodder to the claim that these hormones were “better” than the “synthetic” hormones of “Big Pharma” and would allow women to return to their youth complete with increased libido, better skin, no vaginal dryness, and even weight loss (weight gain is a in fact common with hormone replacement even with the compounded doses ).

The rise of “bio-identical” hormones, was complete with the inference that because these were derived from compounds in plants that they were safer. The second bit of marketing was that the provider could could tailor the amounts of these hormones to the woman’s particular needs.

Marketing to the many women entering menopause were compounding pharmacies, which had associated with a number of “anti-aging” clinics, that had nearly been put out of business when the FDA cracked down on the cracks selling human growth hormone to people who didn’t need it. These providers with their attendant compound pharmacies were more than happy to get into the larger market of women entering menopause. Of note, many of the anti-aging clinics also sold compounded HCG for weight loss, which was also disproven to work (see here).

There is no data that exists to show that compounded bio-identical hormones are safer. These compounds cannot be obtained by simply eating yams or fenugreek seeds, but must be extracted and undergo chemical synthesis to become biologically active in humans. When shown the chemical processes that these plant derived sterols undergo, a number of their “proponents” are shocked. Chemistry is difficult for some.

As an aside, Diosgenin (DSG), the active plant chemical which undergoes synthesis to become an active steroid,  has its own interesting development as a sterol (found in Fenugreek seeds and wild yams) as anti-inflammatory, anti-atherogenic, and brain protective. While DSG has those interesting features, when it is chemically modified to an active estrogen like sterol those properties appear to be mostly lost.

Men  - let's not forget the men

Male  hypogonadism is another diagnosis which is treated by cBHT, often with testosterone replacement. Found in those same "anti-aging" clinics, where men are bombarded with testosterone replacement in the form of cBHT. Male hypogonadism is, like menopause, a condition which may cause men to have lower free testosterone levels that can impact libedo. And much like the over-sell of women, men are often promised weight loss, increased libedo, return of hair growth all with cBHT.

Testosterone was the most frequently prepared compounded hormone by 503B outsourcing pharmacies. Progesterone and testosterone were the most commonly compounded as capsules and pellets

Individualization comes with the provider taking a saliva sample to test for hormone levels. This adds to the allure of science. Saliva testing is NOT indicative of hormones levels in the blood, at the tissue or organ level. In fact, saliva testing is rather in exact and the amounts of hormones found in saliva vary greatly depending on time of day, diet, and other factors.

Individualized or personal testing sounds great. Get hormones that you need to replace the hormones that you are deficient in. There are no studies showing that one can precisely provide the replacement for hormones – this does not stop unscrupulous providers or clinics from implying and advertising such.

Even if clinics use blood tests or other tests, there is no data that shows increased efficacy or safety of these products.

Boxed Warnings are found on all FDA approved prescriptions, but they are not found from the compound pharmacists. That lack of information may lead some to believe that there is a magic to the compound prescriptions, even though there is not. That black box warning is not found from compounding pharmacies – and often it is those black box warnings that bring patients back to their primary care physician to discuss those warnings.

Proponents of these compounded ingredients often state that these ingredients are safe based upon the data from pharmaceutical grade drugs. This is a false equivalence, as different drugs, even in the same class, can have widely different safety and efficacy data, but the compound pharmacies are not collecting that data.

Request by the FDA regarding cBHT

The success of not only women, but men who use cBHT, the FDA requested the National Academies to assess the clinical utility of treating patients with cBHT and convened an expert committee. They issued a 311 page report in 2020 which is available online (click here).

The National Academies consensus report concluded that there was insufficient evidence to support the overall clinical utility of cBHT in the absence of safety and effectiveness data. There is a distinct lack of reliable, non-anecdotal information supporting safety and efficacy. In addition there is a lack of well-controlled clinical trials across all cBHT hormones (estradiol, estrone, estradiol cypionate, estriol, dehydroepiandrosterone, pregnenolone, progesterone, testosterone, testosterone cypionate, testosterone propionate).

While many facilities make the claim that these products are safer and that some preparations of estrogens, for example, cause fewer side effects than others, there is no data to substantiate that.  All that data confirms that any estrogenic material can cause serious cardiovascular and tumorigenic effects.

The appeal of cBHT comes from direct to consumer marketing found on websites, celebrity endorsement, influencers, and televisions. Practitioners who prescribe cBHT and sell cBHT has a direct conflict of interest. What is not found in their literature, websites, or comments are the safety warnings, and sometimes even what are found is the common lie that cBHT leads to weight loss - when in fact, it leads to weight gain.

The boutique medical appeal, the out-of-mainstream approach, combined with the lack of trust for the pharmaceutical industry and the FDA have led women and men to seek solutions that are not backed by the data. Even if these solutions cost more money than if they were to have standard pharmaceuticals which are covered by insurance.