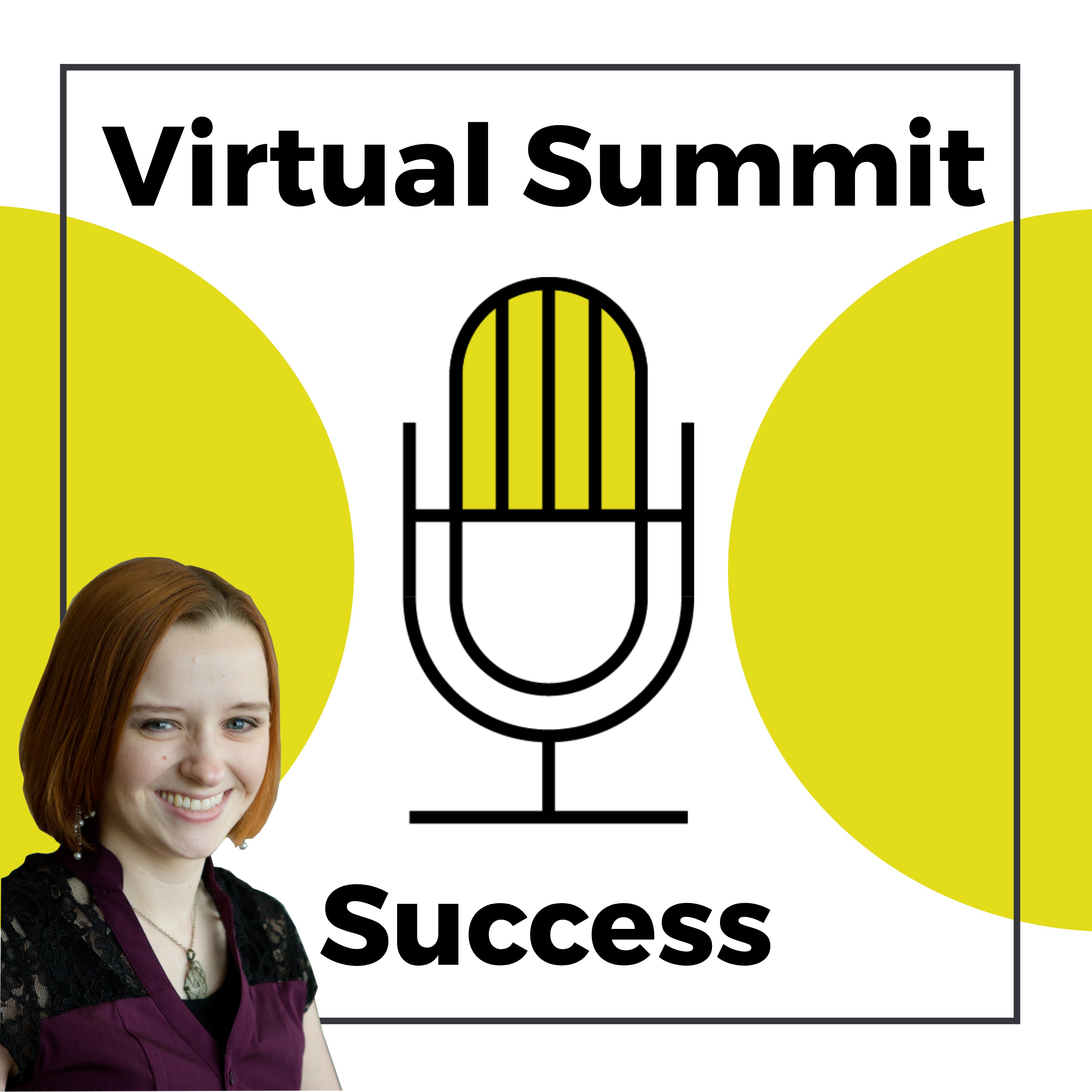 Want to learn more about booking more summit speaking engagements and making more money from them? Get access to Holly's full presentation - and more! - at https://sellwithasummit.com/speakeredition/

Learn more about Holly at https://www.hollygstudios.com

If you want to learn more about summit speaking strategies and how you can use it to grow your business, jump over to virtualsummitspeaking.com. I put together a free audio training that you can take on the go in your regular podcast player!

I'm Jenn, founder of Virtual Summit Search, and you're in the right place

if you want to make the most of your virtual summit experience, whether

you're a host or virtual summit speaker.

Let's get going with your next step to virtual summit success.

You're listening to a snippet of another Sell With a Summit: Speaker

Since videos are almost always a requirement for summit speakers

videos stand out, even in the lineup of other amazing summit speakers.

If you're stressing about how your summit presentation is going to look - stop.

In this session, we're going to be talking all about how to make your presentation

POP by improving your filming techniques.

Speaker Edition, and I'm excited to

introduce you to the wonderful Holly Gillen, creator of From Start to Star

and Video Made Easy, and an industry pro who has worked with companies

Thank you so much for being here, Holly!

Thank you so much for having me, Jenn!

I'm super excited to dig in to this subject.

because we've gone into so much virtual video, especially in the last year,

but there's still so many little things that you can do to make it look better.

strategy, can you give us kind of a quick overview of your philosophy around

business cinema and that type of stuff?

So the way that I describe business cinema is video with a plan,

So it's video, not just willy-nilly videos, but videos that actually

help move your business forward and increase your bottom line.

So you're coming at it from.

There's a reason behind it.

There's a purpose behind it.

And there's a plan and a system and a strategy.

and especially with summit presentations, that's not what we want to do.

Not preparing at all.

a process for recording in place.

So let's the way I kind of break it down: first and foremost, you want

to always make sure you're following the specific requirements that the

summit presenter has given you.

So if it's they need you to do a certain thing a certain way, you want to make sure

you know what all of those are, because you don't want to submit your presentation

already recorded and with a bow on top and then you send it in and they're like,

So first and foremost, make sure that you know what's your what's required of

you; length of time for the presentation.

You don't want to be too succinct or too short, you know, you kind of want

that window for reasons that the summit presenter has already determined;

they need things a certain length.

If that's not an issue, then try to be as succinct as possible.

You don't need to add a lot of extra fluff or unnecessary content.

I know from the perspective of a viewer of a summit, I appreciate

or stuff that I don't need to know.

I like you to get straight to the point.

Give me actionable takeaways, give me a plan, give me the meat.

I don't need the fluff.

I need the meat!

And the way you do this is through pre-production.

So part of pre-production is understanding those requirements.

Also, what is the delivery method that's required from the summit presenter?

Are you going to be doing an interview like Jenn and I are doing here?

Is it going to be a video interview?

Is it going to just be an audio interview?

So, you could show up in your pajamas and it's not really going to matter, right?

You don't want to show up in your pajamas for a video interview and be like, "oh,

I thought this was an audio interview."

So just being clear on all of the details, right?

And if you're not clear on details you could really go wrong.

So that's one place where people go wrong, is not being clear on the details

of what's being required of them.

The next thing is with understanding the delivery method.

be doing screen-share, if you're just going to be doing slides, or you're

going to be doing a combination of all of those things, just planning, all

of that out is super, super important.

I break it down into a couple of different ways: so if you're doing

face-to-camera there's four different areas that you want to prep.

So four different areas that you're going to prep.

face-to-camera and cutting back and forth, or you're doing slides and you're

cutting back to face-to-camera recordings.

And that is all in the pre-production.

and do another face-to-camera part."

So you're not going to just record that first part, then do the slides and then

go back to hair and makeup and do that.

You want to make sure you're batching all of the combined parts together.

sequential, you want to make sure you're recording all of that at the same time.

And then when you're doing your slides, you want to make sure you're

add to the video at the same time.

And you're going to put them together in post production, but this is all

planned out in the pre-production phase, before you ever even start recording

anything, you plot this all out.

You have a vision of what you want to do.

A big mistake I see, just generally when people are recording,

videos is not doing this.

they're editing their video, because they didn't do the front-end preparation work.

They didn't plan it out.

So now they're just like, "oh, I forgot to record this part.

I have to go back and I have to redo this, and oh, I didn't do

So, you know, having a plan for all of the things that you're going to be recording.

So along with that information, I do want to put out there.

that You don't have to create this perfect presentation.

There's no such thing as perfect.

I say that all the time to people I'm like, "raise your hand if you're perfect.

Nobody has their hand raised because nobody's perfect and nobody's

expecting you to be perfect either."

So it's okay if there are slight imperfections.

and what somebody else considers a slight imperfection could be

We are so hard on ourselves.

that hinders your progress.

And I know everybody listening to this has something valuable and important to share.

up in only the way that you can.

So don't let that hold you back.

So I know we've covered a lot.

could take right away to start improving their summit presentation

production quality would be?

Well, I can answer this question in a couple

So when you said one specific thing, I would say, you always

want to be improving you, 'cause no matter where you go there you are.

And that means you as a presenter, but you as the person who's doing

the things behind the scenes as well.

So all of those roads actually all do point back to pre-production.

When you have the right plan in place, everything else becomes super easy.

first and foremost, that is foundational.

You have to work on you, in that sense, being comfortable and

confident in front of the camera.

us take all of this even further, so can you tell us a bit more about that?

So the Get Started Video Block Party - was like a play on words right?

you're unfamiliar with block parties - is people get together with their

neighbors and they have a block party.

So it was like a play on words, but it's also related to blocks - video

blocks - things that are blocking people from actually getting started

and taking action with using video in their business, being able to push past

those uncomfortable issues of mindset things, just blocks that kind of come up.

So it's all about getting started.

So, what do you need to do to literally get started right now?

How do you 'look natural' on camera?

to looking natural on camera and it's not what you think.

And then how to actually make your videos look more professional; so what are

more confident and proud to show those videos off to people and not like, "oh

my God, I hope no one sees that video."

Come to the Get Started Video Block Party.

a lot of folks struggle with that.

So make sure to go grab the Block Party.

Thank you so much for being here and sharing all of this.

their videos and probably take it beyond just the summits too, 'cause

there's a lot that overlaps with doing this for other platforms too.

So I'm excited to see all of the things that everybody does with this afterwards.

Thank you so much for having me on this has been a pleasure.

I could talk about video all day.

I hope you got as much out of this episode as I did.

There were so many aha moments, especially in the full presentation where Holly

shared even more tips on how to make sure that your summit videos stand out,

summit video - or video in general?

Leave a review and let me and Holly know!

Thanks for listening to Virtual Summit Success.

takeaways from this episode.

Every review helps others find us, and the more successful virtual

summits there are, the more tips we'll have to share with you.

For show notes, links, and other resources, go to virtualsummitsuccess.live

Get the Sell With a Summit: Podcaster Edition replays!