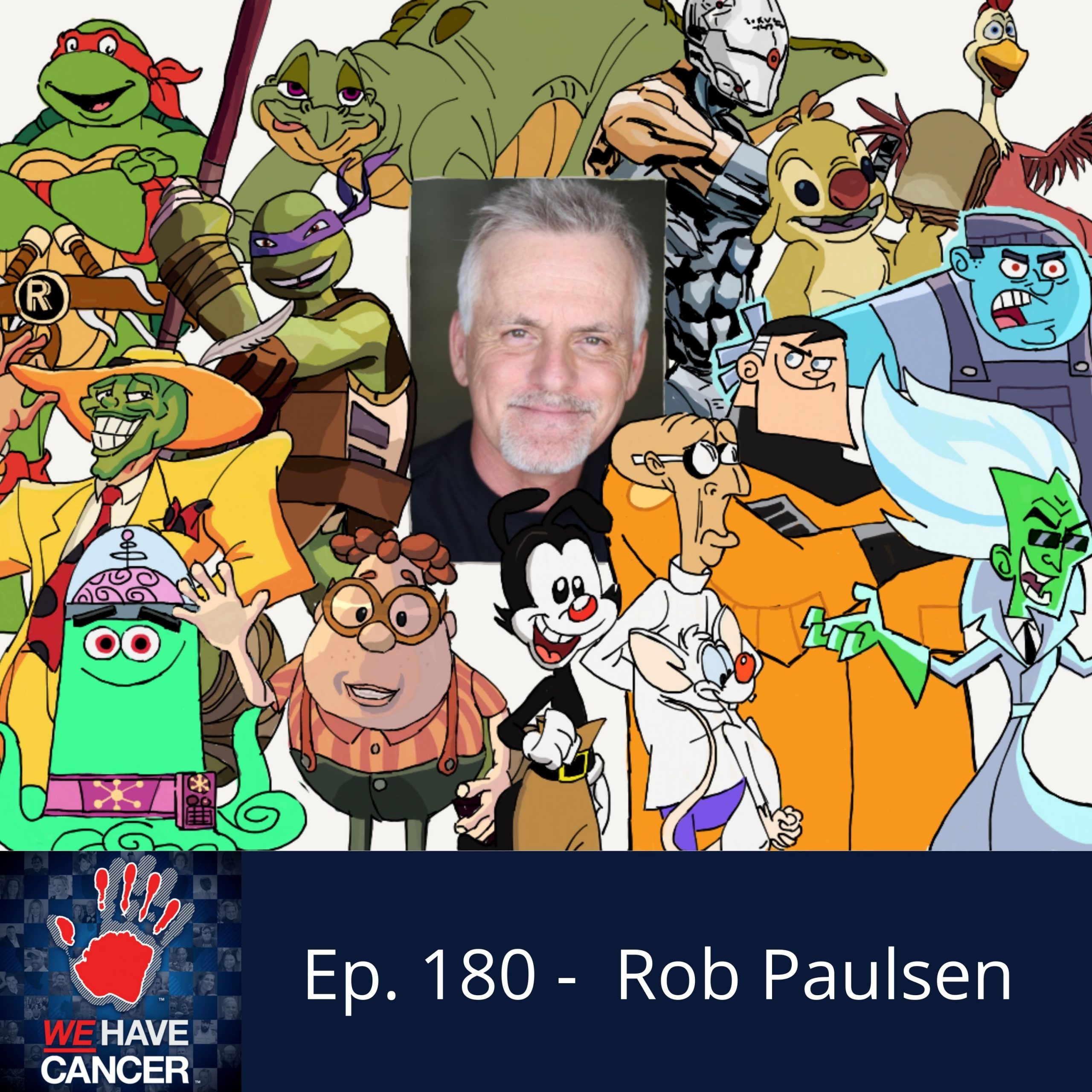 On this episode of WE Have Cancer, seasoned Hollywood voice actor Rob Paulsen shares his unique story battling throat cancer, and the important roles laughter and joy played in his treatment and recovery. Rob brings along some of his most famous characters to put a smile on everyone’s faces during this bright and inspiring episode.

Rob Paulsen is one of Hollywood’s busiest and most gifted voice performers. If you don’t recognize his name, you may recognize some of his most famous characters, including: Raphael and Donatello from Teenage Mutant Ninja Turtles, Pinky from Pinky and the Brain, Yakko from Animaniacs, and many, many others. He was diagnosed with throat cancer at age 60, and the journey of his treatment inspired him to write and publish his own story, Voice Lessons, which is now available in both print and audiobook format.

Rob deeply believes laughter is healing and is one of the keys to health and wellbeing. He says, "Laughter is the best medicine because you can’t overdose and the refills are free!"

Rob's ENT Doctor found a lump on the side of his neck and performed a biopsy. When he got the news with his throat cancer diagnosis, all he could think was how lucky he was to have such a long, fulfilling life.

Rob says everyone involved in his case was kind and professional and patient, and that the compassion was remarkable. He believes some people just have a true calling, and it’s a heroic thing to watch.

When people find out what Rob does, it makes everyone joyful. He shares how he was always making his practitioners laugh, which made him feel like a million bucks. He says, "If I get to lighten their load a little bit, that’s all I can ask for."

Rob shares a special moment of getting to meet Mel Blanc before he passed. Blanc was the voice of countless famous cartoon characters, including Bugs Bunny, Daffy Duck, and Barney Rubble. Rob says he learned a lot from him and still carries those lessons with him.

Rob shares he was not particularly good at living in the moment before his diagnosis. He used to “what if” himself to death, but since his treatment he's learned to take life one day at a time.

Rob says, "I’m not a movie star, the characters that I voice are the famous ones. I thought the last thing the world needs was another celebrity bio from another 'non-celebrity.'" After his throat cancer diagnosis, he became very involved in his treatment in terms of trying to learn as much as possible. Then he thought it might be a great story, which then turned into a great audiobook.

Lee asks Rob what his biggest lesson has been, to which Rob shares his experience learning to simply "be enough." He says he's smart enough to know what he doesn't know, and "it’s a lot." He learned there are certain days where it’s okay to simple "be enough."

Support the Child of the Month; Benny - https://wehavecancershow.com/benny