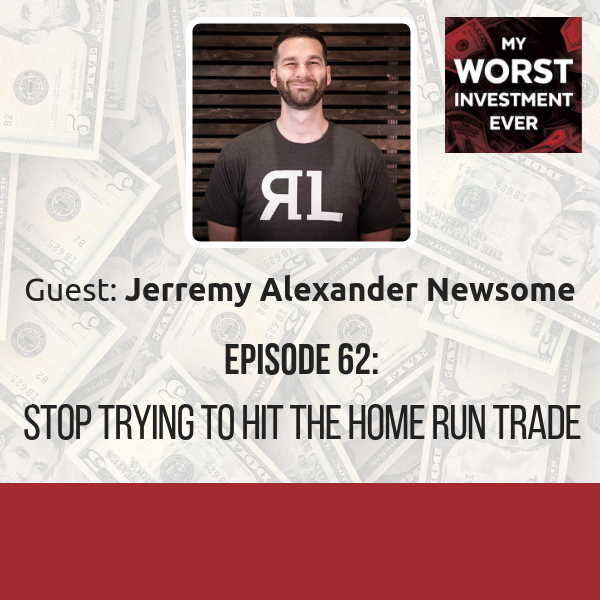 Jerremy Alexander Newsome is the CEO and co-founder of www.reallifetrading.com. The trader and newly published author has one of the fastest growing audiences and websites on the Internet and attacks the markets with energy, exuberance, and humor that is truly refreshing. He has been professionally trading the stock market since he was 21 years old. Jerremy specializes in candlesticks, gaps, day trading with shares and options, swing trading and credit spreads. He graduated from the University of Florida in 2009 with a bachelor’s degree in business management, with a minor in mass communication. In his spare time, he has dabbled in the comedy world, practices Brazilian jiu-jitsu and has an informed taste in music and good beverages.

Many people were inspired by the 1994 Tom Hanks masterwork, Forrest Gump. The box office hit inspired viewers with its mash-up history and heart-wrenching life lessons. Notably, it included an undeniable and timeless investment lesson.

Our guest Jerremy’s love affair with trading in the stock market started when he watched Forrest go to the mailbox while he’s telling his new park-bench friend how he’d had a call from “Lieutenant Dan”, who had invested their money in “some kind of fruit company” (Apple computers, Apple Inc. AAPL:US, APPL.OQ) and that they “didn’t have to worry about money no more”. For young Jerremy, the main motivation for getting into the world of investing was that his family always worried about money and he wanted to find out “How could we not do that anymore?” Jerremy begged his father to invest in Apple as well, and finally he agreed too, also saying he would match his son’s stake. He gave US$1,300 to his father, a sum raised from door-to-door sales of blackberries he had picked himself in the summer of 1994. The Apple shares they bought performed very well and around six years later, his father gave his then-12-year-old self a whopping $12,000 and he has been hooked on trading and investing ever since.

[caption id="attachment_2558" align="alignnone" width="1555"] Red line in the Apple Inc. chart above represents the approximate period Jerremy and his father traded in Apple shares, which succeeded in turning Jerremy’s initial investment of US$1,300 into $12,000. He has been hooked on investing and trading ever since.[/caption]

In this episode, Jerremy shares what sparked his interest in investing and paved the way for his professional trading career.  He will reminisce about the glorious yet ill-fated days of being dazzled by the hottest trend at the time – silver. Jerremy was confident after tasting success when he had a striking 36% return from his father’s retirement funds in three months. But things didn’t go as expected when after its peak at $48.35 per share, it dropped by $10 in a week, a 20% loss in value, and unbelievably plunged to zero in the following week.

Jerremy will detail more of the ins and outs of the trade and how his personal investment and loss of his father’s entire of his taught him the more important lessons: opening up his fears, on following the trend, and risk mitigation. Learn more from Andrew as well as he will give you his six-step process, fundamentals take when investing, for beginners or experts.

Every investor’s going to have losses. It doesn’t matter how much money they’ve made over time they’ve had certain situations that they’ve lost a lot of money on. So being honest, being humble, being open about it is key and integral. And it’s very important through the whole process of learning. You can learn more from your losers, than you will for your winners, without question.

Investor, 21, bedazzled by hype and sheen of silver

On Jerremy’s 21st birthday, he asked for the contents of his father’s retirement account with which to trade. Confident about a strategy he had been using, he went on to make a stunning 36% return on the entire $100,000 in just three months. His father was as excited as he was. Then, he learned about stock options, which move faster than stocks. Jerremy went into investing in silver, which was all the rage and he was as caught up in the media, social and investing hype as everyone else. He felt he could not lose. This was the “perfect investment” and that thought was very assuring. His first foray into silver had been shares in First Majestic Silver (Corp.) ticker symbol (AG:US, AG.A) and he did very well. He holds an unofficial Guinness World Book of Records for buying silver at its highest price and even bought a lot of call options. He bought 300 call options, valued at $16,000 that time.

“… when you think something’s going up, it’s not enough just to own the underlying stock. What if you could take a leveraged bet that says I’m going to make more money when this thing goes up? An option allows you to do that.”

In 2011, the share price for the silver went up from $18 an ounce to $45.57 an ounce in a few short months, which validated his thesis and gave him comfort.

When silver lost its shine

After its highest share price at $48.37, it dropped to $35 after a week.  It is a $10 decrease which is over 20% rate. He bought on leverage so he was not just buying gear, but also the actual underlying position which has zero value other than pure speculation.  Jerremy was speculating at its highest degree and in just one week, the price plummeted to zero. And he lost everything in his investment.

There are two types of insurance that options provide: insurance for the downside and insurance for the upside. Many people are unaware that one factor about trading itself is you can insure your stock positions, which right now is very beneficial for many traders. It is called a put option, which is an insurance position for your shares.  When Jerremy bought a call option, he was buying an insurance position only expecting the stock to go up. The only way to win when buying a call option is if the stock continues to go higher, and he bought a $50 call option when silver was trading at $48.37 cents. It was a position that needed to go to $50 in order to make money and it never did. He lost all of the money he put in, but it didn’t stop him because he thought it was a normal correction. He thought the stock was just pulling back and that it would rebound higher. And so, he eventually ended up buying even more options a few months later in August 2011 and that’s when silver dropped another 20% and he lost all of the money. The $100,000 that his dad gave all lost.

Two fears and why he didn’t get out

Jerremy only thought and considered making profits without considering the downside – how much he could lose or how bad his investments could go.  A few years later, he figured why he didn’t get out and instead of losing it all, he could’ve taken a small loss. He admits he had rational fears: (1) afraid of not being loved and (2) afraid of not feeling good enough. Since he lost all of his father’s money, he had to tell him and he feared that he would lose the love of his father as a consequence. And so, he never got out, which meant he hung on and lost more.

It was a very strong psychological component, because I’m trading (with) my dad’s money, I’m 21 years old and what was happening is when I refused to take the loss, I tried, you know, years later to figure out why. Why did I not just get out, take a loss of some kind and say … ‘Hey, sorry dad, we only lost 50,000’. Rather than losing it all, why don’t I just get out, take the small loss. – Jerremy Newsome 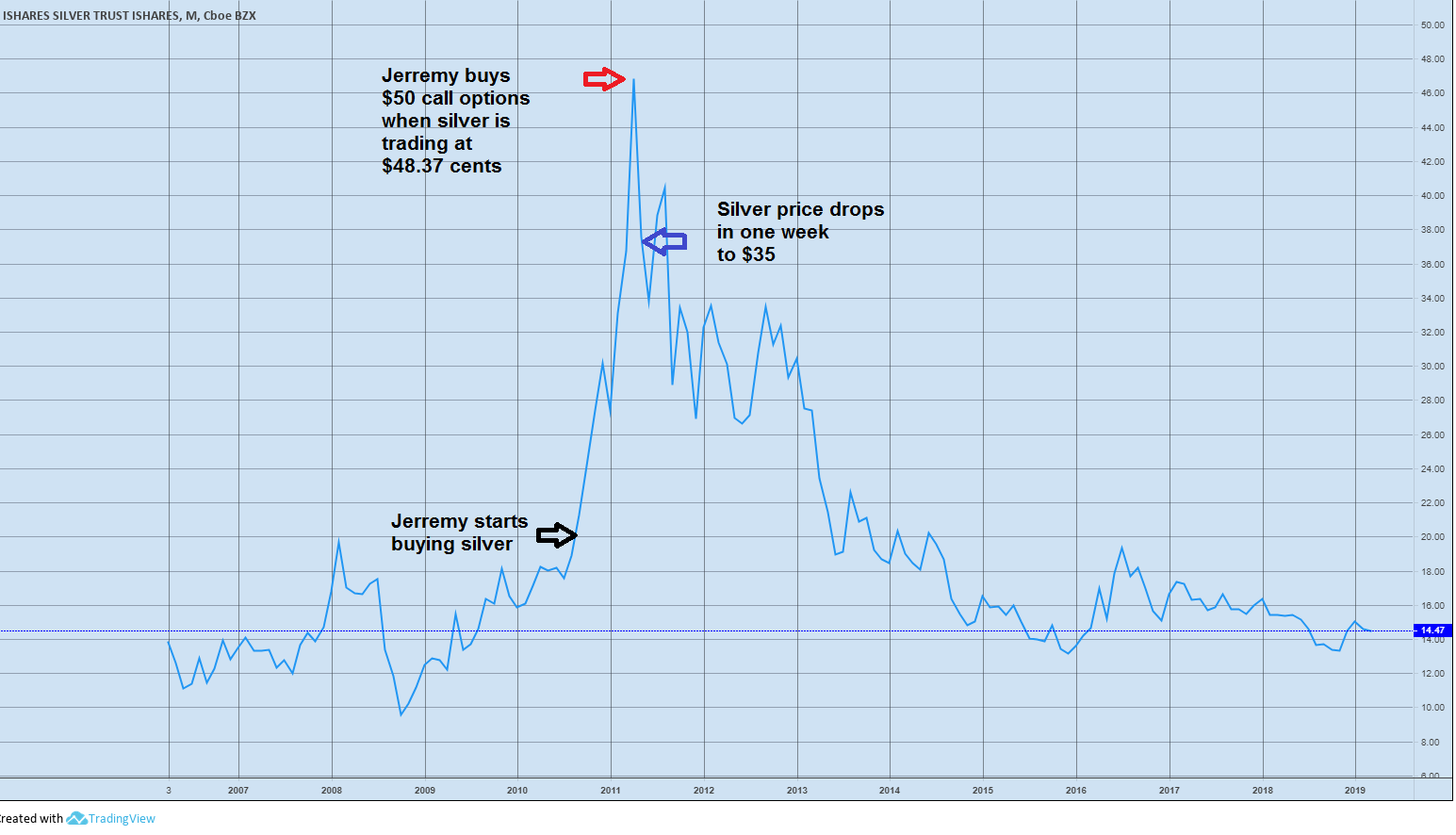 1. If everyone loves something and everyone’s talking about it, don’t get involved. Don’t invest. Bitcoin was the perfect example. Buying at $20,000. No way. Don’t do it.

2.Risk mitigation.  There are strategies you can use where you can either win big or, if you don’t know what you’re doing, you can lose everything. Risk mitigation is key in this environment because if you don’t have the money, you definitely can’t trade and you certainly can’t get it back. But if you have the money, you must protect it. Since you know that you have to protect yourself regardless of how much money you have in this world, you can lose every dime on a position that you don’t fully understand.

He notes Your Money and Your Brain by Jason Zweig, the book he read that helped him realize that investing is a physical thing. We have emotional reactions and we mental reactions to investing. Such reactions can be measured to such an extent and that they are so tangibly physical that he calls investing a contact sport. Most people who succumb to their emotions fail to realize how easily their brains and their emotions are being manipulated.

2.Confirmation bias or The White Toyota Syndrome: When you buy a white Toyota, all of a sudden you notice there’s a lot of white Toyotas on the road. And this is the concept of confirmation bias. That bias is what we’re doing when we’re looking for things that confirm our beliefs. Serious long-term investors welcome ideas that go against their beliefs and they see the value in them.

3. Do not invest when everybody’s talking about it.

4. What should be a good process of investing for the average beginner?

“What is important is that we separate the work that we do on researching the return, which brings all of the positive emotion and the assessment of risk and the researching of risk and risk management.” - Andrew Stotz

Final words: Every trader is going to have losses.

Measures to avoid the same fate

Jerremy advises listeners to do the following:

Andrew’s final word: If we separate the research on the return and the risk, we force ourselves to move to a separate phase of research that allows us then to say, “This is a great return. I’m going to make a ton of money. But now I have to look at how to manage the risk.”

You can also check out Andrew’s Books:

Further reading as mentioned in the podcast