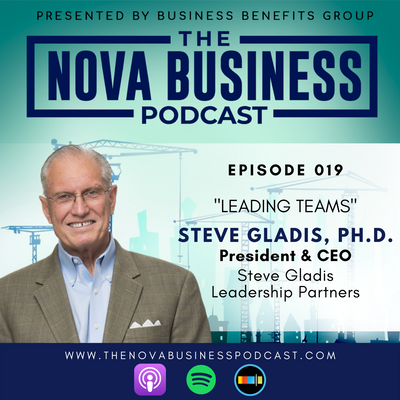 Today’s guest is one of the most respected and distinguished executive coaches in Northern Virginia, Steve Gladis, Ph.D. Steve learned discipline, compassion, and leadership at an early age. His mother was a meatpacker, and his father was a truck driver. Steve served in the Marine Corps at the height of the Vietnam War. After returning home, he met his wife, and initially attended Medical School before deciding to embark on a career with the FBI. Over the years he transitioned from the field into speech writing, training, and more – helping to shape his later transition to academia being an author, and more – all while working through the challenges of being dyslexic.

Today, he leverages his background, his many talents, and more, to help leaders lead more effectively. He has written over 25 books on the subject, including Leading Teams: Understanding the Team Leadership Pyramid; Positive Leadership: Self-Leadership: Become the CEO of your Own Career, and Solving the Innovation Mystery; The Game Changer at Work; and more.

Today, we discuss many important topics, to include:

Today, Steve remains focused on his work under Steve Gladis Leadership Partners, while remaining focused on larger missions to serve the community, primarily through Northern Virginia Family Service, and other initiatives.

Connect with Steve on LinkedIn