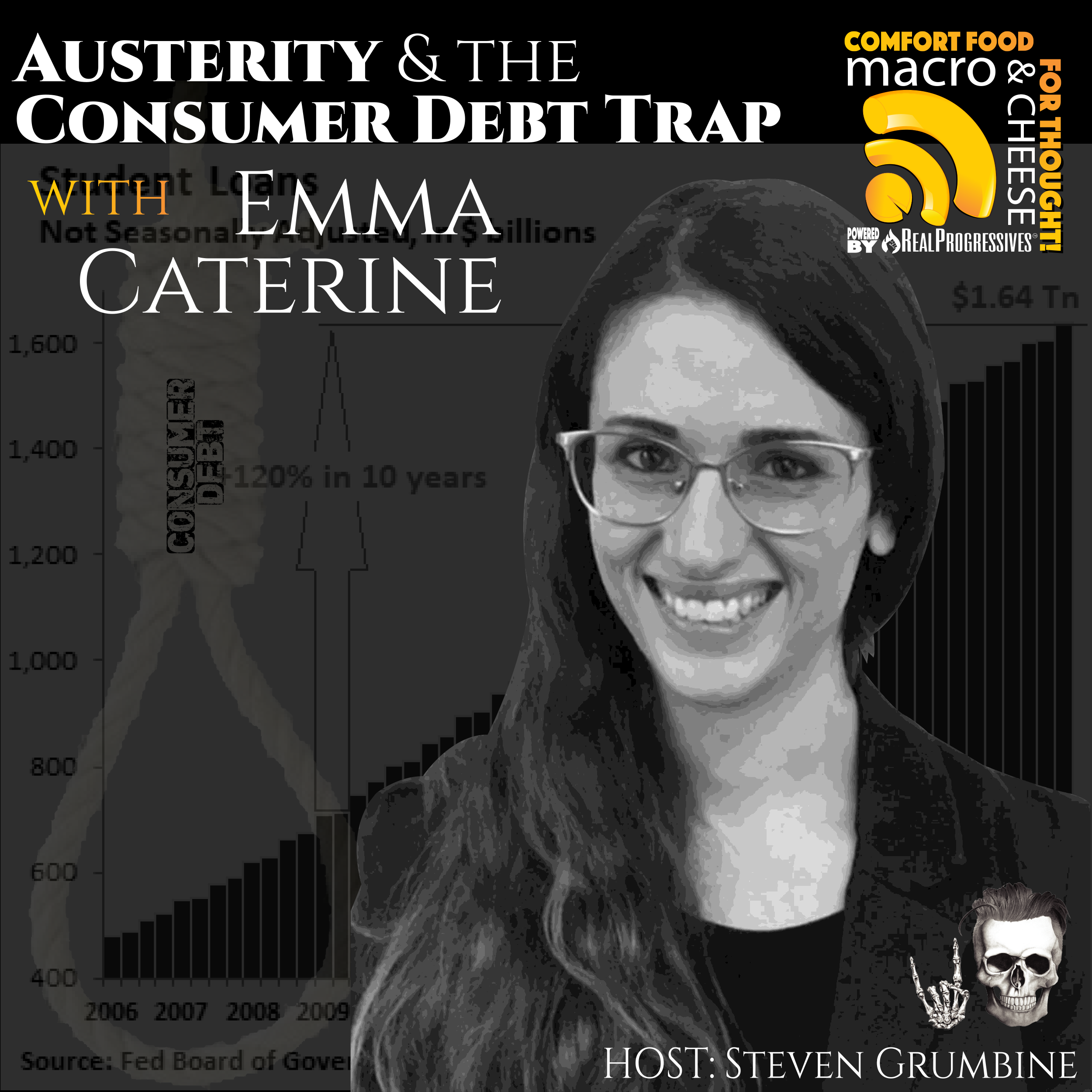 Steve’s guest, Emma Caterine, is a consumer rights attorney with special interest in predatory lenders like loan sharks and payday loan companies. She begins by talking about credit as a social construct, To fully grasp the causes of Great Recession we must understand the difference between consumer debt, with a high risk of default, and federal spending, which is new money and can never default.

When our economy grows through private debt, it’s unsustainable and leads to crises like the Great Recession.

MMT economists, including Wynn Godley, Stephanie Kelton, and L. Randall Wray, have shown that the idea that public “debt” and the deficit are inherently evil and to be avoided at all costs, or that financial crises are caused by “imbalance in the economy” are all myths. What we see then is that cutting public spending -- austerity -- is a political choice.

Emma asserts that private household debt and private corporate debt have similar consequences on different scales, though the households bear more of the burden. Private equity firms load companies with tons of debt to be serviced by cutting labor and selling real estate holdings, which is detrimental to surrounding local communities -- people of color and the working poor in particular. This growth model based on private debt proves that lessons weren’t learnt from the Great Recession. It’s a more intense and modern version of basic capitalism. The data underscores how undemocratic it is.

It’s actually about who gets the power to make these decisions. Emma boils down the increasingly neoliberal method: austerity politicians deregulate and cut funding, then the private financial sector fills the gap with privatization. Nearly everything in our lives has private equity behind it, prepared to strip all value with no regard to long-term sustainability. Emma expresses the hope that politicians like Warren and Sanders can and will stop the Wall Street looting.

Steve and Emma then turn to the effects of austerity, from abandoned malls and virtual ghost towns to shorter, more brutish lives, and an ever-growing private debt bubble from payday and title loans -- death traps for the already suffering. The average family cannot afford a $400 emergency but are forced to turn to these predatory forms of credit.

Steve, as someone who suffered the ill effects of the recession, and Emma, a consumer rights attorney whose clients are working-class and mostly people of color, discuss how we cannot simply talk about income inequality but must actively choose to reverse austerity and the neoliberal paradigm to end the punishment of poverty.

Emma advocates increasing public investment, regulating private corporations and the financial industry. She supports the Loan Shark Prevention Act, putting a cap on interest rates. This regulation would counter any inflationary risks of the Green New Deal and Medicare For All.

Plans are not enough here; an organized, people-led movement is essential for any paradigm shift. Emma doesn’t trust “professional middle-class experts” to solve the problem but instead focuses on community groups, agitation, organizing, and allying with labor. The movement needs to be people-powered, and groups like DSA are there to hand out the (metaphorical) torches and pitchforks.

Emma Caterine is a consumer rights attorney on the board of the Modern Money Network, a decades-long writer and advocate of economic justice, LGBTQIA+ racial and feminist justice movements - and a proud member of Democratic Socialists of America.