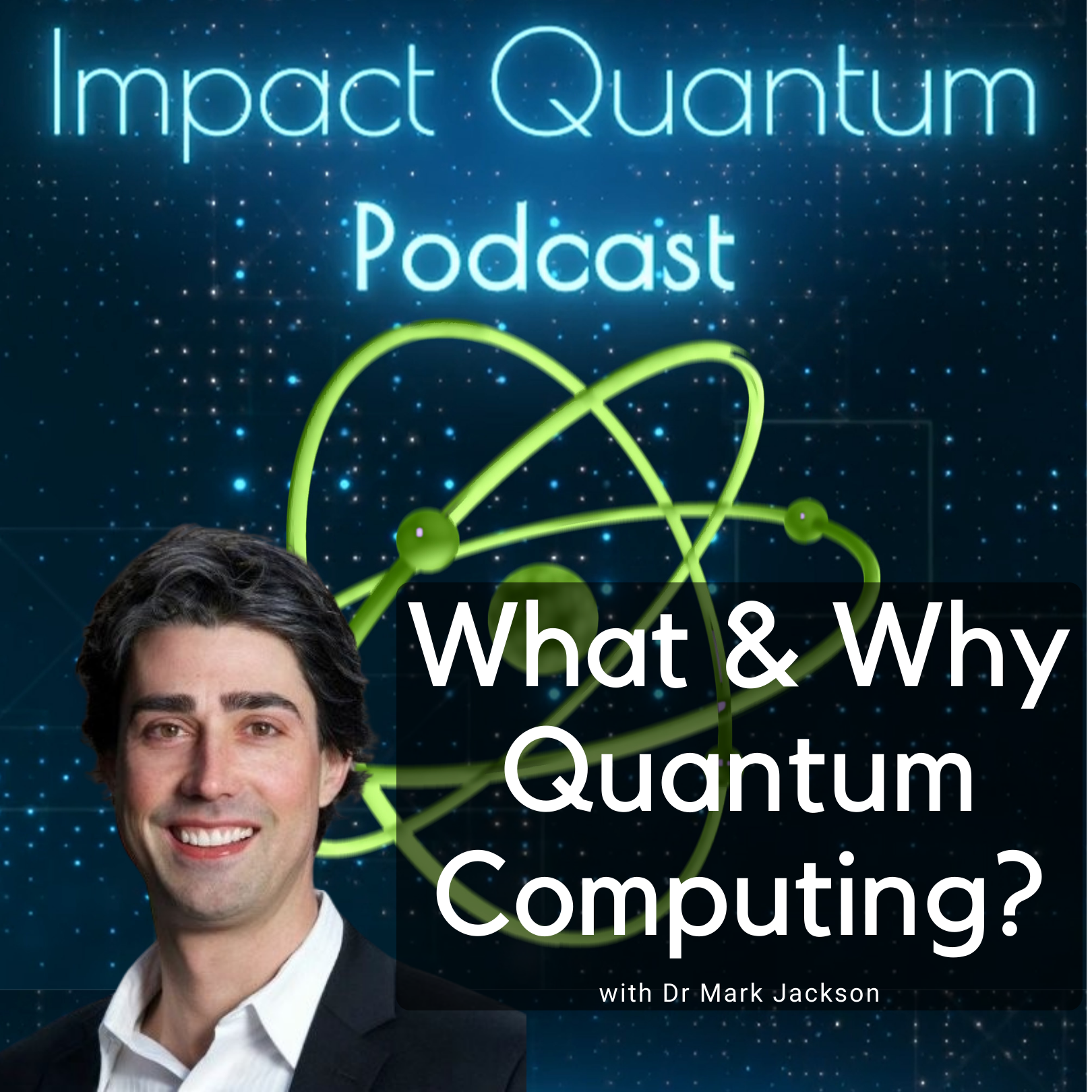 In this episode, Frank and Andy welcome our first guest to the show.

Dr Mark Jackson is a Quantum Evangelist at Cambridge Quantum Computing, which may just be the best job title I have ever heard.

This episode is entitled "What and Why Quantum Computing?" and is rated one and a half Schroedingers. It could be 2 Schroedingers or just one. You will have to observe the entire episode to collapse the wave function.

Hello and welcome to impact quantum.

A podcast about quantum computing for developers and engineers.

In this episode, Frank and Andy welcome our first guest to the show.

Doctor Mark Jackson is a quantum evangelist at Cambridge Quantum Computing, which may just be the best job title I have ever heard.

This episode is entitled what and why Quantum Computing and is rated 1 1/2 Schrodinger's.

Two Schrodinger's or just one.

You will have to observe the entire episode to collapse the wavefunction.

But first, here's some dubstep.

Hello and welcome to impact quantum.

The podcast where we.

But you keep hearing about this thing called quantum computing, which is going to change everything.

And I happen to believe that it will change everything, and to that end I.

Hey I have my trusty co-host from data driven.

With me Andy Leonard.

Hey Frank, thanks for for bringing me along as folks will quickly learn, you know way more about quantum computing.

So I guess I'm just here for my pretty faves.

Of course, of course we are.

Actually recording this in video on teams, but come with me with us for the first time in impact quantum history.

We have a guest and it's Doctor Mark Jackson.

Uh, who has probably the coolest job title I have heard in about a decade or two?

Welcome to the show.

Mark, you're our first guest ever.

It's great to be here.

When I you know I would use the term knows more as a very relative term part of the if you're listening to the show and you've listened to the archives.

Part of the reason why we haven't had a lot of shows is because I really kind of hit my cerebral limit at the time to talk about so.

Given that quantum is still a relatively new field and there's a shortage of experts in the field, but I think you know we were.

I was blessed to get in contact with Mark where we can talk about kind of this with an expert because he's a quantum evangelist.

It's a pleasure to be here and I am Cambridge, quantum quantum evangelist.

It's it's pretty unique.

That is very cool.

Uhm so So what?

You know, what does a First off?

How did you get into quantum?

Is your background in quantum physics?

I earned my pH.

In string theory from Columbia University under the supervision of Brian Greene, who you might recognize.

And then I did it.

Who's documentaries on string theory I I do enjoy?

Yes, I I'm actually in that, uh, I have a very brief cameo.

I was a student and and half my face is in it for.

Uh, back when I was a grad student and so then I I did research in that area for about 10 years and I briefly did a tech startup doing scientific fund raising before I returned to teaching at Singularity.

University and that was where I first started hearing about quantum computing. This would be around 2016.

Uh so so. Quantum computing only existed academically when I was a student, and so I rarely heard anything at all about it and it was in 2016 people started talking about quantum computing, being commercially feasible, and I thought this was amazing because it was all the things that I I loved about physics.

Superposition and entanglement and all these crazy physics concepts.

Uhm they they started saying they could actually build machines and do this for you.

Whole things, and I thought that was amazing.

And so I started trying to get into the field.

I was giving presentations about quantum computing to executives, but I felt sort of like a cheerleader on the sides.

I actually wanted to be doing it, not just talking about it, and so I tried to get into.

And it was a bit frustrating because I didn't.

Have a background in quantum computing and I didn't know too many people in it, but I was very lucky that a friend of mine, a math professor at Berkeley where I was living.

He made an introduction to our CEO.

Ilyas Khan and it was very well timed because Cambridge Quantum was about three years old and everyone at the time was in the UK.

Massachusetts 'cause it could go either way.

Yeah, it's it's actually the old school, Cambridge, our company Origin story is is quite amazing. Ileus was chairman of the Stephen Hawking Foundation and in in 2014 Hawking told him I think quantum computing is going to take off. You should get into this business and so that's how we started because of Stephen Hawking.

And so yeah, we we have one of the coolest origin.

Stories ever and so in fall of 2017 I I joined as one of the first American members of the team.

And so I've been there about four years, and it's been an amazing journey.

I I can't think of any other technology that's.

The pace of innovation has gone through the roof like you start hearing these news and you know whenever I would look on YouTube for you know recent videos and you filter by like you know you'd have to look for like oh in the recent month for quantum anything about quantum computing.

Now it's the point where something new gets published every couple hours like.

Yeah, it's it's almost every week we some we see some new major announcement about a.

There's a new company being founded.

It really is developing very quickly.

It's tough to keep up with with everything.

When I started four years ago, I remember some of my physics friends being a little skeptical.

Was quantum computing really a thing?

Was this a wise career decision?

And no one is questioning it.

There's so so much money and so much talent being put into this.

It really is amazing.

Yeah, I mean it's funny because you you know you'd said you didn't have a background in when you when you look to get into this in quantum computing, but I'm thinking like.

Who does? I mean? There are people, obviously, but I mean I could probably. I mean going back, maybe the 2000.

14 When Stephen Hawking kind of had his, you know, had his say and created your you know kind of inspired the launch of your company.

I would say there's probably maybe a dozen people worldwide would would would be in quantum computing, at least commercialization of it and not just the research.

So I find that I find that interesting because a lot of folks, when they look to to to get into a new career, even though I guess technically you're still heavy in.

In in, in the deep sciences I would call.

You know people, still you know with your pedigree.

Having worked under Brian Greene and even being in one of his documentaries, even if it's for a half a second I I mean you face that challenge.

So I think I think it I think for anyone here who's looking to transition into a quantum career, know that you know you are going to face skepticism, but I also think that there will be an inflection point and mark.

And tell me this has happened.

Now where the demand is going to be far outstrip the supply, that as long as you kind of know more than the average Joe or Jane on the street, I think that there's still good opportunity.

This physicist, when he pointed out that there were a lot of problems that we never could hope to solve using normal computers and a prime example is.

Is very difficult for a computer.

We can only simulate only the very simplest model.

Schools and so he pointed out we have to build a new type of computer, one based on quantum physics.

This was about 40 years ago and no one knew how to do this at any feasible level, and so there was there was academic progress, so research labs and such would work on this, but it wasn't anywhere close to being commercialized for many years.

And then it was. It was around 2014 that started to change.

So it's only in the past few years that quantum information science, the academic term for this.

Really emerged, so there are now several universities offering degrees in quantum information sciences, but that's a relatively new development.

Most of the people.

Kind of the older people just had to pick it up on the street.

They were there or their physics professors.

So like very few people who really did this or there are people who came from other areas of science and technology who were able to pick up enough.

For example, I'm not even on the scientific team.

I'm on the business team, so even though my background is in theoretical physics, I actually don't know enough that I could.

Be a scientist in this area.

Interesting, I see a lot of parallels with kind of how traditional computer science had kind of evolved, right?

First you had to be an electrical engineer.

Or have that kind of a pedigree?

Then then you know, as computational.

Well, computer science kind of came out into its own as an active separate academic discipline.

You know there was there, you know it kind of evolved from there.

You know, obviously we're we're pretty early, so we don't know how the movie is going to end, but I kind of seen this story structure before in that regard.

That there there are these big machines in big rooms with wires hanging out and you do have to be a specialized engineer fiddling with things and it changes on a day to day basis which parts are working or not.

Uh, only a few people really know how to use them.

There are some differences in that back then you had to be physically there next to the machine, whereas now we have the Internet.

Which is great in the pandemic.

Which is great during the pandemic that we can access these quantum computing machines, but but they are still experimental and engineers have to be on site to fiddle with them.

Things in a few years, though that probably won't be the case.

There will be a few people.

Uh, specialized in them, but a lot of people will be able to use them without having to be.

An expert in them, right?

So I mean, there's definitely this.

This evolution that's happening, and it's it seems to be picking up pace.