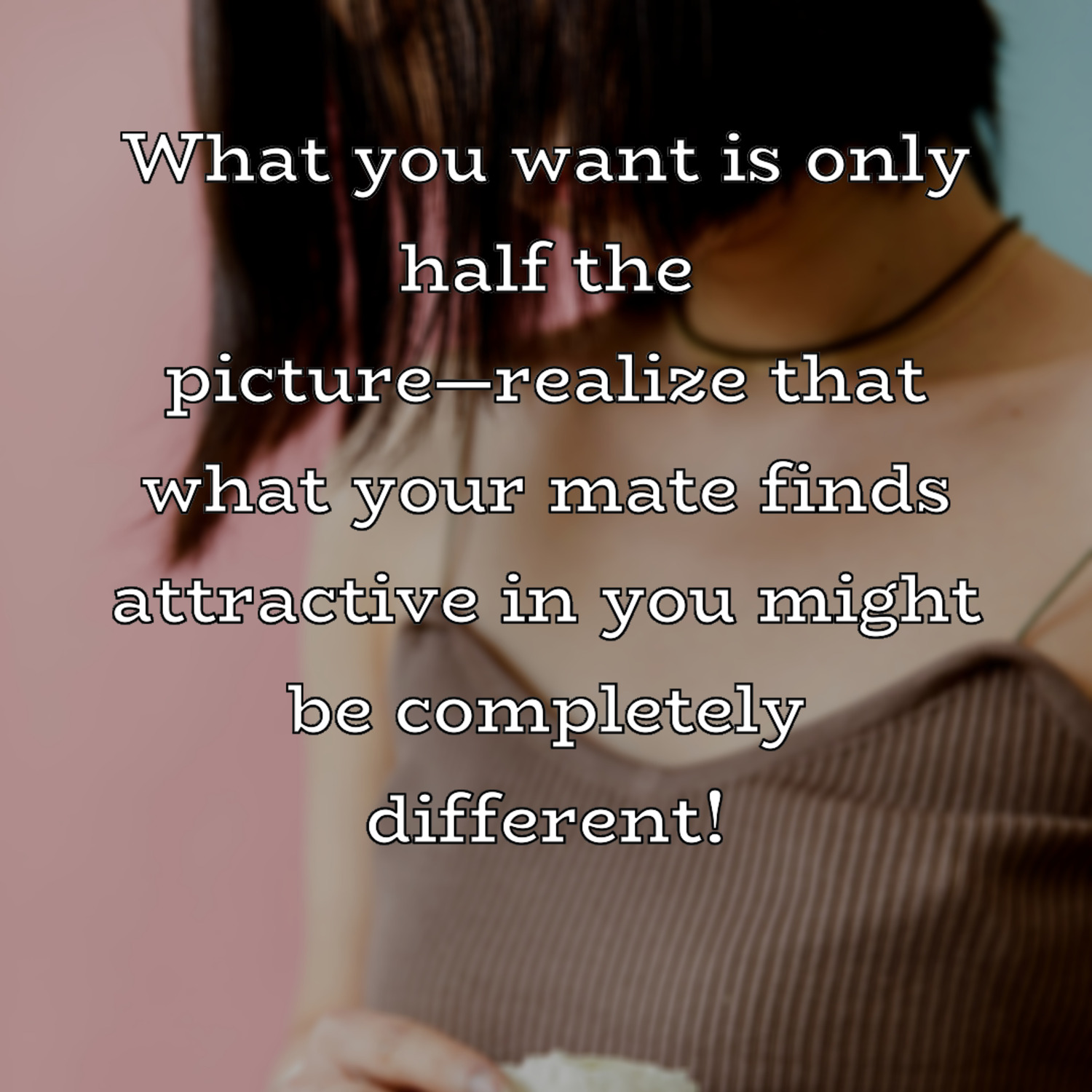 Human beings tend to want the same things in their mates—attractiveness, resources, and emotional connection—but people will rank the relative importance of these differently depending on their sex and their life stage. A good dating strategy takes this into account and finds a workable overlap.

In reading the previous section, you might have wondered if the four sequential steps were always the same for all people at all times in their lives. Several studies show that there are indeed differences in the way that men and women appraise attractiveness in a mate, but even more than that, there are differences across age groups, meaning that even a single individual may change in their approach and their preferences over time.

Women are found to highly rate age, education, trust, emotional connection, intelligence, and income—around fourteen points more on a one-hundred-point scale than do men. Men, on the other hand, have a relatively higher preference for physical attractiveness and build compared to women.

An interesting finding is that this difference between the sexes slowly diminishes with age; in other words, as people mature and get older, physical attractiveness becomes less and less important. On the other hand, the other two areas—personality and resources—become more important with age. This makes sense if we consider the four-step sequence above: physical attraction gets things started, whilst emotional connection keeps things going.

Basically, there are distinct differences between men and women, and this shifts across changing life stages. Evolutionary scientists talk about differing “parental investment” and how it impacts our mating behavior. In essence, because men and women have different biological roles in human reproduction, their behavior reflects their biological investment. But of course, this biological aspect itself changes over the course of our life.

What does this mean for people wanting to become masters at creating and sustaining attraction? Well, it means that you need to consider what “attraction” means for the people involved:

Are you male or female?

What stage of life are you in?

Are the people you want to attract male or female?

What stage of life are they in?

Seems obvious, but the answers to these questions will greatly affect the way you think about attraction and the strategy that will work best. For example, let’s say you’re a twenty-five-year-old single male with sex on the brain. You’re in demographic who rates attractiveness and physical build in a mate the most highly. But who are you attracted to? Women the same age as you give lower rankings to attractiveness, and higher ones to personality and resources—in fact, the younger the women, the more she will prize traits like trust and emotional connection.

If you hope to get anywhere, your strategy needs to make sense. Yes, women in your desired age bracket value attractiveness to some extent, but they actually value emotional factors more. If you wanted a no-strings casual situation with a woman who didn’t value emotional connection as much, you’d be better off going for a woman in her sixties!

This example simply shows that when it comes to the science of attractiveness, many variables are at play. What works best for you is going to be a balance between what you want and what you can offer. Some men are desperately unlucky in dating because they fail to consider “the market.” Think of a creepy and unattractive-fifty-year-old divorced man who wonders why he can’t catch a beautiful twenty-year-old heiress who is happy to spoil him financially. In this case, he’s thought of what he wants but not how he appears to people he’s attracted to and what they want, given their sex and age bracket.

Or imagine a woman who spends a lot of time primping and preening and going to the gym so she garners plenty of attention from young guys who highly rate physical attractiveness. She may catch one of these guys, only to realize that what she actually wanted was someone who she could rely on, talk to, and build a life with. Her strategy focused too much on how to be attractive while ignoring what she herself was attracted to, given her sex and age bracket.

You need to find the overlap between you and the person you hope to attract. You won’t get anywhere trying to appeal to people in ways they don’t actually care about. If you are a male, you need to understand that women rank attractiveness as less important overall than you do. They care about it, but they care about things too, so your strategy will fail if you don’t recognize this and plan accordingly.

Do men and women want different things? Yes and no. We all want a partner who is attractive and smart and kind. But men and women prioritize these slightly differently. When you’re dating, what you want is only half the picture—realize that what your mate finds attractive in you might be completely different!