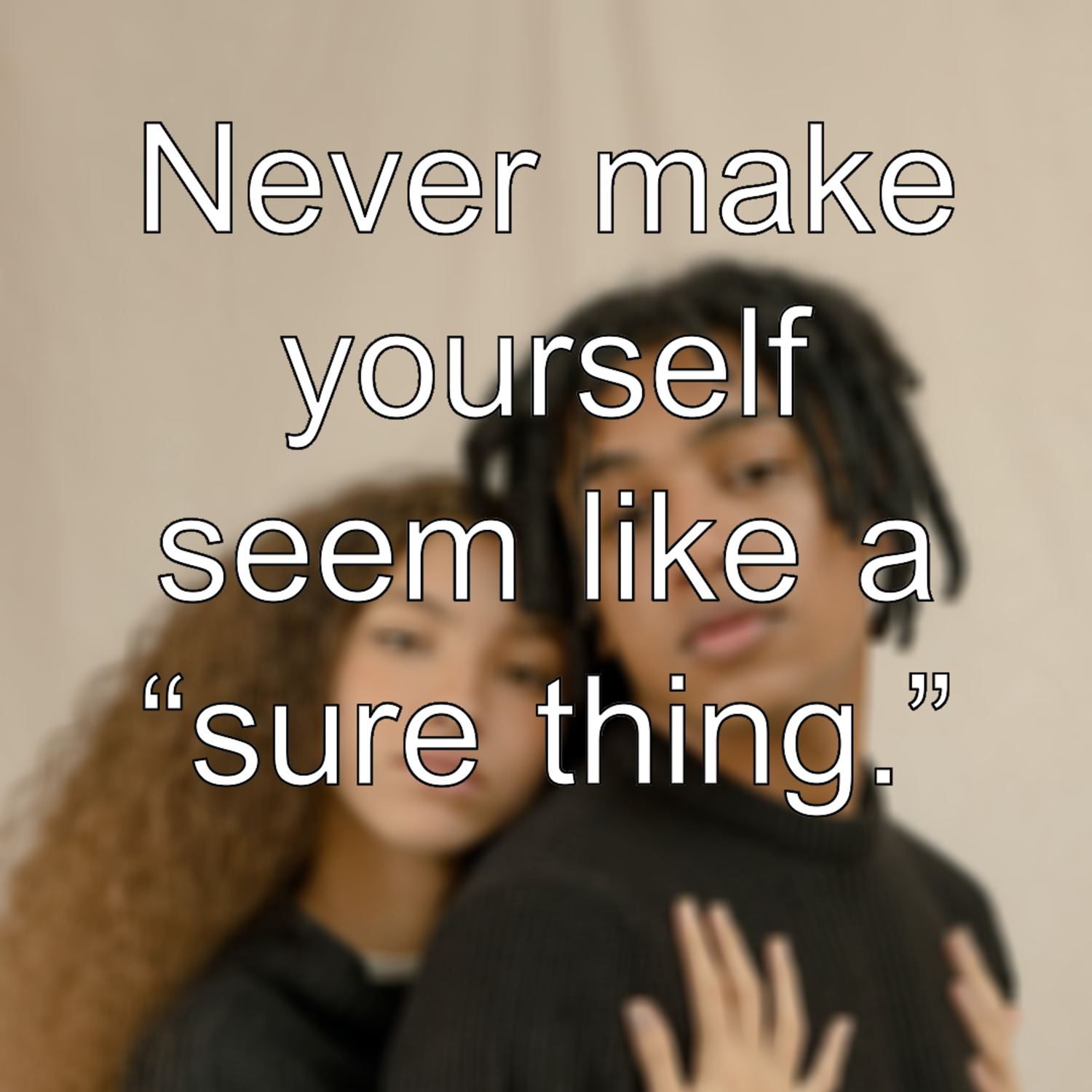 You may appear more attractive when people are unsure of your feelings for them, so dont be too transparent too early on. Give compliments, but let their meaning be ambiguous.

Take a look at the following scenarios:

Scenario 1: You go on a first date with someone, have a great time, and then are doing the date “postmortem” afterward to assess how it went. You liked her, but you aren’t exactly sure about how she felt about you.

Scenario 2: You go on a first date, have a great time, and learn later that your date also had an amazing time and is very keen to meet you again.

Which woman are you most attracted to? Though you might think that you’d prefer the woman who was obviously as into you as you were into her, research in the journal Psychological Science actually suggests that people are more attracted to those who seem undecided about them. In other words, uncertainty may increase feelings of attraction more than clearly knowing someone else’s feelings.

The scientists called this the “pleasure” of uncertainty—although if you’ve ever experienced the agony of not quite knowing if your feelings are reciprocated, you might disagree with how pleasurable it is! What is clear is that is does in fact increase your attraction. It’s as though the unresolved nature of the situation grabs our attention. Cognitively, the issue remains unresolved, so our thoughts return again and again to the other person, trying to figure them out. Contemplating whether he “loves me or loves me not” may in fact be more pleasurable and create more feelings of attraction than being flattered outright or (obviously) rejected by your love interest.

All this is to say that uncertainty is a part of the dating game, and, if you do it right, an especially fun and exciting way to build tension and create attraction. The key is to remember that you are building attraction and piquing interest, not squashing it. You never want to give the impression of outright rejection, but rather keep things open ended. It’s the game of trying to find out what the other person feels for you that builds attraction. The idea is to create uncertainty, which makes you pop up in the other person’s head as often as possible, which in time kindles attraction. It may even be that once you do reveal your interest and end the uncertainty, there is a greater sense of accomplishment and resolution—remember, the things we perceive as scarcer or more effortful are things we perceive as more valuable.

What can we do with the results of such a study? Well, the first thing is not to openly display too much affection too early on. Interest and politeness—yes. But you want to retain some mystery, and leave a little room open for the chase. Never make yourself seem like a “sure thing.” That way, the other person has you on their mind. Even better if you can build in a little flirting that plays with the very idea of not quite being sure yet where you stand with one another.

A word on the common technique of “negging” or actively putting a woman down to build attraction—it doesn’t work. The study found that when women perceived that men did not in fact find them attractive, they seldom felt attracted themselves. It's usually a bad idea to insult women—even playfully! Women love being complimented—remember that this absolutely increased the attractiveness of men in the eyes of the women in the study. But if you want to build attraction even more, don’t start making declarations of attraction too soon in the game. You may choose to share a few compliments but make them ambiguous, so that she doesn’t quite know what these compliments mean.

It's all about dynamic tension—you are concealing the extent of your feelings not to play games or manipulate, but rather to create a deliciousness and expectation—a bit like how concealing a Christmas present with wrapping paper makes us more excited to receive it than simply getting it immediately with no need to wait and wonder what’s inside and whether we’ll like it or not!