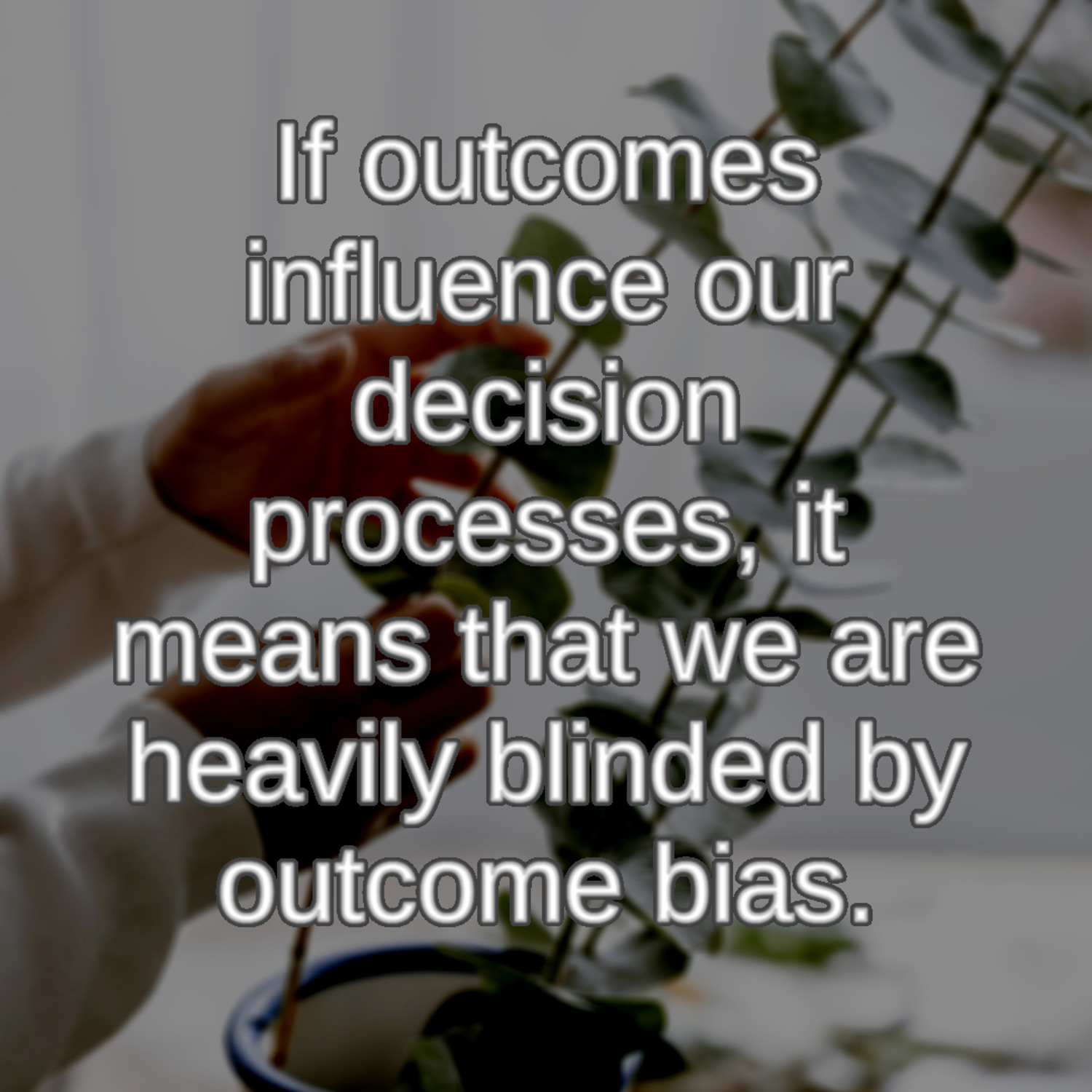 Three mental models are specifically suited toward our purpose of practical intelligence and acting within the bounds of common sense. First, we discuss the difference between evaluating a process versus an outcome. Often we can fall into the trap of outcome bias, wherein we ignore our decision process simply because something turned out favorably. Second, we learn to tell stories in reverse using the fishbone diagram analysis. This is a powerful tool to deal with the problem of cause and effect and illuminate our thinking to the possibilities of alternative perspectives. Third, we come to separating correlation from causation, and understanding the true relationships between events we observe.

Sometimes, we get obsessed with outcomes. It makes sense. We work really hard to achieve them. They’re our goals; we think about the moment of victory when we are trudging along in the trenches.

If outcomes influence our decision processes, it means that we are heavily blinded by outcome bias.

Outcome bias means that you repeat a process, solution, or decision because the outcome was positive instead of thinking through the steps that led to that outcome. In other words, you are saying, “Well, I don’t know why, but that solution worked last time. So let’s do it again!” But if that’s all the thought you give it, you’re relying more on luck than anything else.

Focusing on the outcome means that you are simply working with incomplete information. What do X and Y matter if you attain the outcome you want? This type of thinking can easily bleed over into a mental habit of ignoring critical thinking and reinforcing bad thought patterns. We give outcomes too much power; we don’t want to be fooled by the proverbial stopped clock, which is correct twice a day.

Here’s a clear example to understand outcome bias. Imagine that you went out to a bar and had a few drinks. One of your best friends showed up and you stayed out even later and drank way more than you had expected. But you still drove home, even though you were drunk. You arrived at home without any incident. In this case, the outcome is good. Great, even! You got home safely, and you didn’t even have to spend money on a taxi. But that doesn’t mean the decision to drive drunk was a good idea. If you were swayed by outcome bias, you might think that driving drunk was no big deal because it had worked out in the past.

Most people are able to recognize that the decision to drive drunk was bad and the outcome was good. Thus, bad decisions can sometimes lead to good outcomes. Good decisions can also lead to bad outcomes.

But the only thing we can do is the best with what we have at the moment, and that means we have to evaluate and analyze the decisions, not the outcomes.

It turns out that outcome bias is pervasive. In the world of poker, it even has a special name: resulting, in which competitors focus only on the results of a game. In poker, players’ decision-making can become easily muddled by what worked well the last time they played. However, the best way to play is by thinking about what is most likely to occur and making decisions based on probabilities. The outcomes in the past can play a small role but are only a single factor among many others.

A member of the audience shouted that she had made a mistake. But just because it was more likely that player A would win didn’t mean it would happen. Betting on player A’s hand was a better decision to make with the information the bettor had when they first saw the cards, even though it wasn’t guaranteed. If Duke were to then use outcome bias, she might bet on a player with player B’s cards in the future, even though it’s not the best hand because on this one occasion, that hand won.

In your office or workplace, outcome bias may also take place. For example, your boss hires a new employee through your obsolete and outdated hiring process of a single written test. Then, instead of evaluating the hiring process to see if it was thoughtful or fair, your boss only focuses on the new hire’s performance and whether or not they’ve achieved good outcomes. Suppose they do earn the company a lot of money. The company sees no need to change what is already working or to “fix what ain’t broke.”

More than likely, this means that the company’s ancient hiring processes remain terrible and that the company is extremely susceptible in the future to terrible hires. If it goes unchecked, the interview process may cost the company money when poor hiring decisions are made over and over again. For instance, the next employee the company hires immediately begins embezzling money and then flees to Mexico with a seven-figure payout. This could have been prevented by simply trying to ensure a better decision process.

Notably, you have to be careful not to confuse outcome bias with hindsight bias. With hindsight bias, the correct choice seems obvious thanks to being able to see how things played out. However, the answer may not have been clear at the time the decision or choice was made. For example, you might say, “I knew it was going to rain” as it starts to rain. But it had been sunny earlier in the day and you hadn’t watched the weather report, so there’s no way you could have known it was going to rain. This differs from outcome bias, in which case you might decide to always carry an umbrella.

So how can you avoid the negative effects of outcome bias and create a better decision process? What can you do to avoid getting caught in this trap?tcomes have been achieved. Consider this examp

le. There are two doctors. One of the doctors offered a patient a cheaper medicine with great results in studies. The other doctor offered their patient a more expensive medicine for which they also earned a commission, and this medicine also had similarly great results.

Right now, ask yourself which doctor you think made the best decision. You’d probably view the first doctor in a more positive light than the second one. After all, the first doctor appears to have the patient’s best interests in mind while the second doctor is concerned with enriching himself.

As for outcomes? It turns out that the patient of the first doctor suffered from a side effect of the medicine and had to be hospitalized for a day. The other patient didn’t suffer any side effects and recovered fully. Does your opinion on the decision change at all? It shouldn’t, though there is a natural tendency to switch sides. Indeed, in a study, respondents who knew about the outcomes exhibited outcome bias by viewing the second doctor more positively when compared to the first.

The outcome can skew your perspective and make you less likely to appreciate how the first doctor had the patient’s best interests in mind, while the second doctor acted selfishly. Instead, you focus on the bad outcome, in which the first patient suffered and blamed it on his doctor, even if either medicine had an equal chance of causing a side effect. e how you view behaviors and intentions. To m

ake sure you value intentions and the decision-making process, do this evaluation before you know the outcome. Or wait until after you’ve completed your evaluation to learn the outcome.

Along the same lines, make an explicit effort to think about what people want to accomplish (their intentions) rather than the outcome. However, Francesca Gino, an expert at Harvard Business School, says that even this strategy of highlighting intentions can’t always help people avoid outcome bias. The best bet, she says, is not taking outcomes into account at all when making decisions.

If you’re evaluating candidates for a promotion, start by considering factors that don’t have to do with outcomes. Is this employee hard-working? Do they arrive on time? Are they a good communicator? Do they contribute meaningful ideas? Are they making a good effort and doing what they are supposed to be doing?

These are all things employees can control; they cannot control outcomes. If we were to only go on outcomes, we would be evaluating these candidates based on how lucky they were. And that’s not the basis for sound decisions.

This mental model as a policy is best phrased as “if you build it, they will come,” where “it” is the decision process and “they” is the result you are seeking.