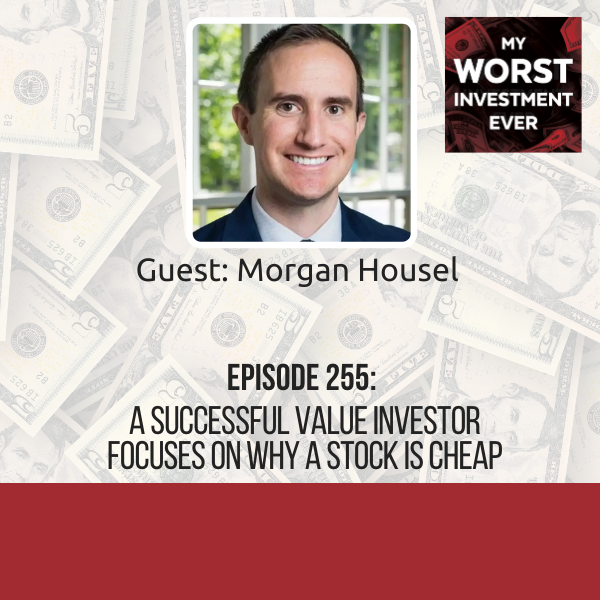 Morgan Housel is a partner at The Collaborative Fund and a former columnist at The Motley Fool and The Wall Street Journal.

He is a two-time winner of the Best in Business Award from the Society of American Business Editors and Writers, winner of the New York Times Sidney Award, and a two-time finalist for the Gerald Loeb Award for Distinguished Business and Financial Journalism.

His book The Psychology of Money, was just released and is available here.

“Investing is not like physics where the laws of gravity were the same in Newton’s days, and they are in our days. Investing strategies evolve overtime to get to the point where they don’t work anymore.”

One of the first investment books that Morgan read was the Intelligent Investor by Benjamin Graham, written over 50 years ago. The book talks about all these practical strategies that value investors can use to pick stocks. One of them that Graham goes into great detail about is buying stocks for less than the book value.

Graham’s strategy was to calculate what a business is worth. That is its assets minus its liabilities. That gives you the book value of the company. So your goal is to buy stocks that are less than the book value.

For instance, if a company is worth a million dollars, and you buy its stock at the point where the company is worth, let’s say $800,000, according to Graham, you are making a good investment because you’re buying the stock for less than the company’s worth.

Borrowing from the greats

Old is not always gold

Morgan invested in these cheap stocks, confident that he would make a killing. Unfortunately, almost all of them went out of business.

Morgan wondered what he had done wrong. Did he get unlucky? Did he not follow Benjamin Graham’s advice correctly? What happened here? Morgan soon realized that the reason why this happened is that the investment world had changed since the 1970s.

It was true that in the 1970s, in the 1960s, the 1950s, and 1940s, stocks trading for less than their book value were probably good investments. That was true back then. However, things changed over time, and that strategy does not work anymore.

There’s a reason why a stock is cheap

If a stock is cheap, you need to know why it’s cheap. Almost always, say 99% of the time, the reason a stock is cheap is that the business is not performing well. It is probably burning money or has enormous liabilities.

A cheap stock is the market’s way of warning you

As a value investor, when you see a company that’s trading at a price that’s lower than the book value, know that the market is telling you that there is no future value in that stock.

Move away from the finance textbooks that are written to apply to everyone and think about your own goals, personality, philosophies about money. You will then start making better decisions because it’s less about your intelligence and the formulas that you know, and more about becoming attuned with yourself and your own goals.

Morgan’s number one goal for the next 12 months is to keep his expectations low while hoping for the best with his new book.

“We are going to look back at 2020 as one of the worst years in modern history, but we are also going to look at it as a turning point of innovation, technology, and problems that are being solved faster than we have done in years or maybe decades.”