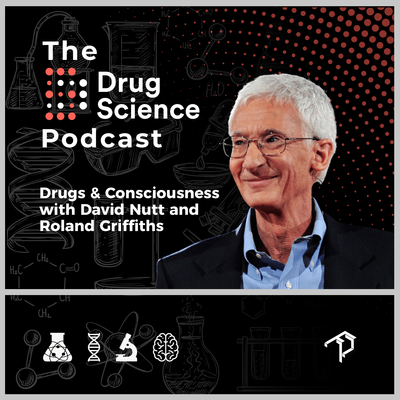 In this episode of the Drug Science podcast, Professor Nutt is joined by an old friend who he has known for 35 years. Professor Roland Griffiths is a researcher who has examined a wide range of psychotropic substances through the years. He has studied, the abuse potential of a number of different substances; caffeine dependence and withdrawal, and the relative prices people are willing to pay for access to common street drugs.

Roland Griffiths, is a Professor in the Departments of Psychiatry and Neurosciences at the Johns Hopkins University School of Medicine, and founding Director of the Johns Hopkins Center on Psychedelic and Consciousness Research. His principal research focus in both clinical and preclinical laboratories has been on the behavioral and subjective effects of mood-altering drugs.

He has conducted extensive research with sedative-hypnotics, caffeine, and novel mood-altering drugs. In 1999 he initiated a research program investigating the effects of the classic psychedelic psilocybin that includes studies in healthy volunteers, in beginning and long-term meditators, and in religious leaders. Therapeutic studies with psilocybin include treatment of psychological distress in cancer patients, treatment of cigarette smoking cessation, and psilocybin treatment of major depression. Other studies have examined the effects of salvinorin A, dextromethorphan, and ketamine which produce altered states of consciousness having some similarities to psilocybin. Drug interaction studies and brain imaging studies (fMRI and PET) are examining pharmacological and neural mechanisms of action. The Hopkins laboratory has also conducted a series of internet survey studies characterizing various psychedelic experiences including those associated with acute and enduring adverse effects, mystical-type effects, entity and God-encounter experiences, and alleged positive changes in mental health, including decreases in depression and anxiety, decreases in substance abuse, and reductions in death anxiety.