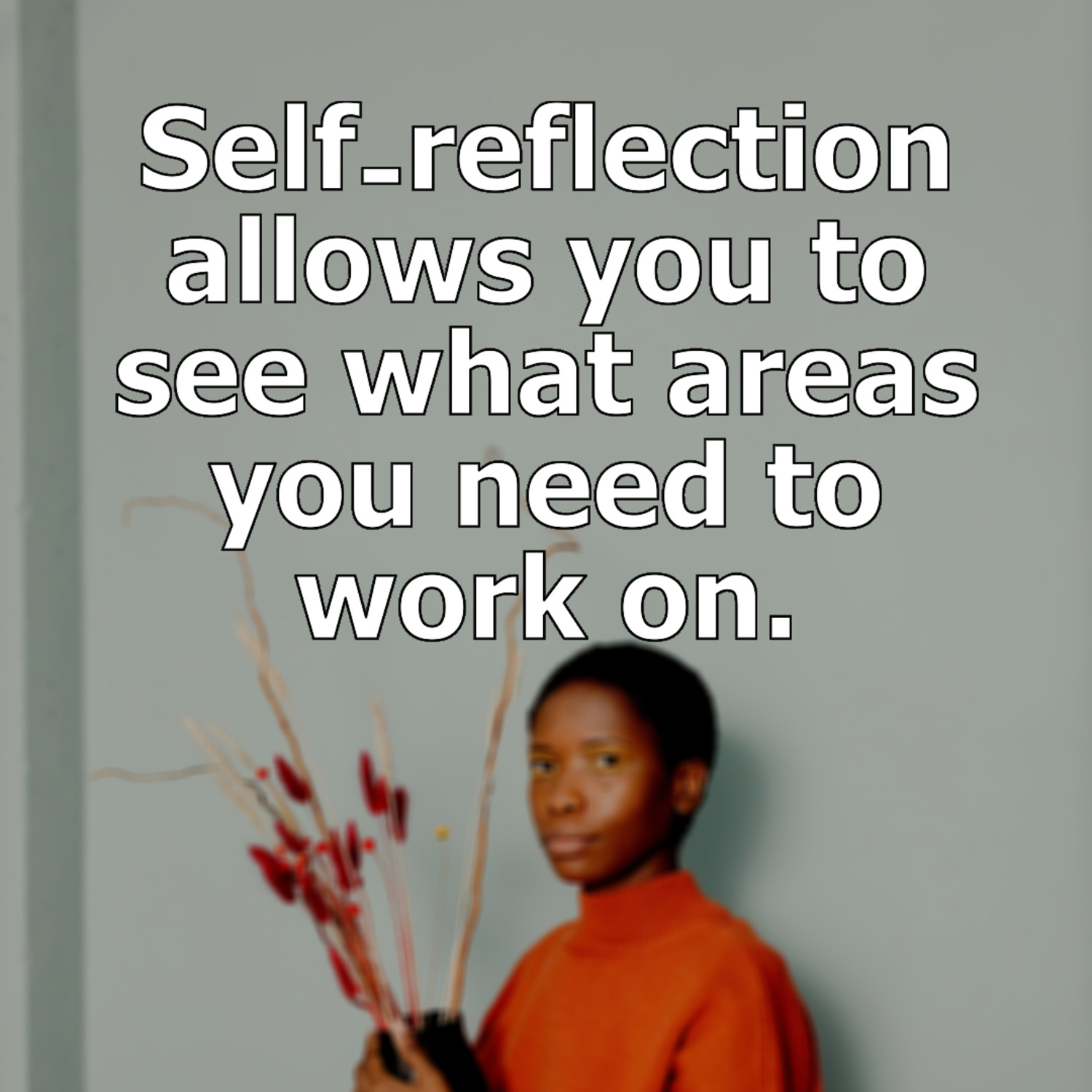 Working with the limitations of your own brain requires an honest appraisal of where you are and how you’re functioning. Make it a habit to routinely assess yourself on the following aspects, on a scale of one to ten: Sense of purpose, the presence of positive mentors, sensory rich vision, self-belief, planning and organization, education and skills, patient perseverance, and the ability to see work as play.

This kind of self-reflection allows you to see exactly what areas you need to work on and see whether your efforts are resulting in progress.

Get the audiobook on Audible at http://bit.ly/PowerOfSelfDiscipline

Rosa became obsessed with films after watching Back to the Future at the age of eight, and subsequently decided she wanted to be a movie director. There hasn’t been any other ambition for her ever since. She always kept her goal of directing in mind, even though for the next twenty years, she never made any concrete steps toward it other than to be an avid movie watcher.

Her knowledge of arcane movie trivia was second to none. Whatever hours she didn’t spend watching films she spent on the Internet and in history books reading about them. If she could have gone on the trivia television show Jeopardy, she would have been a long-running champion. Rosa had read multiple biographies of all of her favorite directors: Spielberg, Kurosawa, Fellini, Miyazaki, and more.

Yet she never translated this research, knowledge, and information into action. She had a fairly expensive video camera that she kept confined to her closet, as well as an archive of film editing software that she had only used a handful of times. They were all too intimidating and confusing. Moreover, what if she discovered that all her knowledge and preparation weren’t enough and she was destined to fail at becoming a director? It was easier to take the path of least resistance and remain in inaction. At least learning about Fellini and Miyazaki’s favorite films made her feel productive to some degree, even if she was avoiding the elephant in the room.

One day, she discovered an acquaintance of hers had started a YouTube channel that was quickly amassing millions of views. Out of curiosity, she started viewing the videos and was struck by what she saw. This wasn’t art—the shots weren’t framed adequately, her focus was wrong, and the narrative structure was reversed!

None of the viewers seemed to care, however, as the views continued to increase. What’s more, the reviews of the videos were all glowing and encouraging. No one cared about the framing or focus. It was impossible for Rosa to ignore the fact that this person had done far more than Rosa and with far less knowledge and expertise. So Rosa made a dramatic decision. If she can do it, why can’t I?

For four months she was going to make real, concrete strides toward becoming a director—of anything. It was time to buckle down and keep going when all she wanted to do was give up. No more retreating to her comfort zone; she was going to translate her dreams into reality through sheer willpower and self-discipline. She already had the knowledge; it was just time to put it into action.

She first organized her time into two categories: learn and practice.

During learn time, Rosa methodically studied how to write a script, assemble a plot, and what methods renowned directors used to get the shots they wanted. During practice time, she experimented with different shots and angles, wrote a few scenes, and changed perspectives and storylines to see which ones worked the best. No more was she spending hours watching commentary of old movies she’d seen hundreds of times before. And no more was she letting her equipment gather dust in the closet for fear of not being able to use it correctly. For a while, Rosa was brimming with energy and enthusiasm at finally doing something about a dream she had held for so long.

The day those four months ended, Rosa set out to make her film. She found a few local actors who were willing to work for pizza. She herself was the camerawoman. Her cousin was her sound person, and her dog was a prop. When she finished, she put it online and it garnered a few hundred views, mostly from family and friends. Rosa wasn’t a professional filmmaker, but these were all steps on the journey to seeing her wishes become reality.

She committed herself to completing one short film every month thereafter. She soon grew a reputation for being one of the speediest and most knowledgeable directors in the business. A scant three years later, one of her short films was entered into a film festival competition, something she never even dreamed about when she was just starting out. While she didn’t win any prizes, she still gained recognition and began to be able to support herself through her childhood dream of directing.

One day, all at once it seemed, Rosa took a look at the work she had done and felt genuinely good about how far she’d come. She had done it (or rather, she was well on the path to doing it, and keep on doing it!). All the awkward first attempts, early failures and learning curves almost vanished from her memory and she felt proud, accomplished, and confident in her abilities. She wanted to do even more and go even further.

Some might say Rosa was lucky. Perhaps some other movie buff who never quite made the leap from “thinking about it” to actually doing it. That is partially true—but if Rosa had never made the decision to buckle down and do what she had been avoiding for years, she never would have been in the position to be lucky.

So what brought Rosa the success she attained as a director?

She realized just in time that she needed to give herself the gift of self-discipline. She knew that whatever she wanted was behind a door that could only be unlocked by it, and no one else could do it for her. Nobody could push her through that door or open it for her. If she did nothing, she would stay on the wrong side of it forever, dreaming and hoping, yet never any closer to what she craved deep down.

She changed her habits, started thinking methodically, and put her ideas into motion. She didn’t expect overnight miracles or get discouraged when her first attempts were a little rough. She didn’t accept a lifestyle devoid of challenge or pain, and she willed herself to a goal through hardship and struggle. She didn’t give up when she wanted to, as she did for years, and put her goals above a sense of temporary discomfort. In a way, she dimply no longer accepted that not striving for her goal was an option for her anymore.

Self-discipline, willpower, self-control, “mind over matter”—whatever you want to call it, that was what Rosa summoned, and that’s what this book is about. It’s the process of going through what we’d rather avoid, in order to reach what makes us happiest.

Even if you don’t quite believe it right now, Rosa possessed no extra superpowers that you lack. If it seems difficult, well, it is. But it was no less difficult for Rosa to get over her sense of doubt and disbelief, than it is for you now to imagine that you could succeed at your dreams. What I mean is—if she can do it, then so can you.

On the surface, it’s easy to explain: ensuring that we act in accordance with our intentions. It means focusing our intentions and behaviors in one direction to achieve the life we want. It represents the ability to do what we want no matter what. We intellectually and logically know that it’s the way to what we want. The only way.

So why did Rosa wait years to act? Why is it so hard for many of us?

Self-discipline and matching a thought to an action involves the mind. The second part—the action—is not a problem because our arms and legs generally do what we tell them to do. They aren’t pulled in different directions by stray thoughts. Even if they don’t listen to us the first time, we can physically force them into compliance. But the mind—your thoughts, intentions, and expectations—can’t be twisted and forced into anything.

Consider that the goal of most meditation and mindfulness practices is to eliminate all mental chatter to focus on a single thought, or to focus on a physical sensation and no thought at all. Control and mastery over our minds are a few of the best weapons against stress and anxiety. Arguably, control over the mind and translating that into action is one of life’s most elusive achievements.

Quick—don’t think about the purple elephant wearing a tutu. Did my warning work? Are you now not picturing the elephant standing in a meadow with its big floppy ears and a white sheer tutu? Are you successfully not imagining its trunk and thick legs? Probably not. And that’s why the mind is such a difficult beast to defeat.

Self-discipline is the creation of a clear path between your internal and external realities, no matter what.

No matter if there are no immediate rewards; in fact, the rewards are usually so far away that you can’t even fathom them at the moment. No matter that sometimes the progress is so gradual that it’s difficult for one to gauge any difference, and if they can’t see exactly how they’re getting better, then they’re apt to give up. No matter that other times, the mind is hijacked by emotions, triggers, and otherwise damaging thought patterns.

This is just a small sampling of what we battle on the road from intentions to actions. However well-intentioned you are, your mind just doesn’t care. It has to be coaxed, built, and even tricked into compliance, and that’s what you’ll learn in this book.

Appropriately, this first chapter is about the various obstacles we face in putting a leash on our minds.