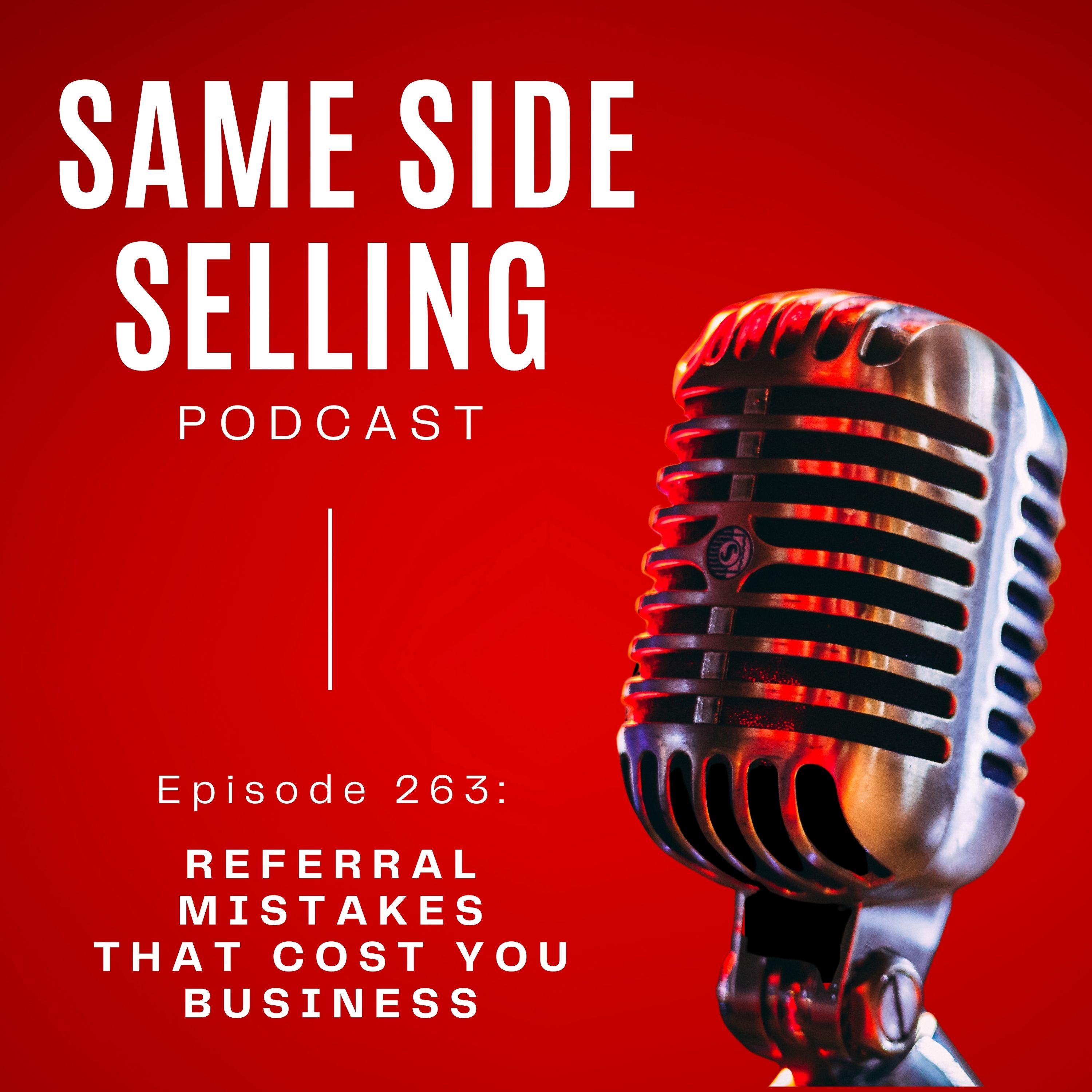 Hi, it's Ian Altman, and welcome to another episode of the Same Side Selling podcast.

Today's episode topic is why making more cold calls probably is not the answer to your problems.

Very often, what I hear from people is they say my reps aren't making enough calls. And so, management feels that they're not getting enough business, the reps aren't making enough calls, so what they tell them is, I want everybody to be on the phone more. I want people sending more cold outreach. I want to use LinkedIn to find anybody who could possibly care about what we sell. I want you to reach out to your network. I want you to have more meetings, more phone calls, more interactions.

Here's what I want you to consider, if in fact, you have a message that's really compelling, then people are probably going to start finding you. So instead of reaching out with initial cold calls, maybe you should try something else. Think of it this way, gee, I'm not getting enough business from the people I'm calling, so I'm going to call more people.

Now, I'm not a fisherman, but what I do know is that one of my relatives loves fishing. Absolutely would like to do nothing more than fish. And so, I've talked to him, and I said, what's the secret to fishing? He said, well, first, you got to know what you're going after because depending upon what you're fishing for, you're going to use different methods and different bait. And I said, well, what do you mean, I mean, a worm's a worm, right? He said, well, depending on what fish are going after, a worm may not do it. You may need another fish. You may need live bait. You may need bait that isn't alive. Depending on what you're fishing for, there are different things that you use to attract that type of fish.

It's the same thing in business. Too often, what happens is people just say, oh, I just need to do more of the same thing I've been doing that hasn't been generating results for us. And if we keep doing more of it, we're going to get better results. And the reality is, all that happens is you get diluted across more people who aren't necessarily interested in what it is that you do.

So instead, what I want you to think about is kind of taking a step back. And the first thing you have to ask yourself is, who are my ideal clients? And the way you find that out is by defining, really well, what problems you solve. What I mean by that is very often what people say to me is, well, we're an IT services provider, or we're a software company, or we're in this expense reduction business. Great. That's all about what you do. What you have to think about instead is using a term that my buddy Bob London coined, find out what is your elevator rant. What would people complain about that you're really good at solving that maybe they haven't even thought about? Meaning, how would they describe, in essence, their symptoms that might be an indicator of a condition that you're really good at treating.

So, if you're an IT services provider, and you're someone who maintains people's networks? Well, that's all good and well, but what you may want to say is, well, we focus on law firms who have trouble attracting and retaining top talent because their IT systems are antiquated. They feel like they're in the Stone Age, and it's tough to attract new modern thinking attorneys when your systems seem like they're from the late 80s or 90s. Now, that's the type of problem that you solve.

So very often, when I'm helping companies accelerate their growth, the first thing we do is say, what's your message? What's your positioning? How is your company situated to attract interest and stand out from the competition? See, instead of just thinking about how do I have more cold outreach, the first thing we have to do is think about who are we fishing for? Who are we trying to attract, and what's our bait to do that? See if we don't have the right bait, and if we're not fishing in the right place, we're not going to catch the fish we're looking for. It's just that simple. Which isn't a bad metaphor for a guy who's not a fisherman, right?

So, what we want to think about is how we can come up with that messaging? So first, the idea is that these elevator rants, in essence, the things your clients would complain about that you're really good at solving. Most businesses have six or seven of those. This is something that in our Same Side Selling Academy, we spend a lot of time with people on developing those elevator rants to attract your ideal clients. So, for example, let's say you're an architecture and design firm, you can say, well, we architect and design buildings and spaces, just like every single other architectural and design firm. Or you can say, well, people usually come to us when they've got complex logistics issues, and they need to design a space to facilitate all of their logistics business. Now we're getting more specific about the types of problems that you solve.

Then we want to make sure that we're creating a message for people that differentiates us from other people. That's something we refer to as the Client Vision Pyramid. The idea of the Client Vision Pyramid is that we define the three levels of relationship that people might be looking for in our industry. So, for example, if I was an architecture and design firm, and I'm just using different examples here, if I was an architecture and design firm, I might say, well, and when people are looking for help in architecture and design, they're usually looking at one to three levels. At the base level, in our industry, are small, kind of generalists. They do all sorts of different buildings, not highly specialized. At the next level are large firms where everyone knows their name. They are usually combined with a great presentation. You know you're not getting those people on your project, but they often come up with a really impressive presentation, and they have a lot of different resources. At the highest level, kind of the pinnacle in our industry, these are people who specialize. Maybe they specialize in logistics and logistical operations, and how do they build facilities that make those operations run smoothly. And the idea is that those people will take the time to learn the ins and outs of exactly what you need. How you need your space to function, and then tailor it specifically for those needs to fit within a realistic budget. Which level you're looking for?

So, by defining those three levels of the Client Vision Pyramid, it makes it so that now we've attracted someone with something specific about the problems we solve. Now we've created some level of differentiation between what it is that we do and what it is the rest of the industry might do. And it creates that differentiation.

Then what we need to do is disarm, to say, even though we have an amazing track record of helping people with those specific problems, I don't yet know if we can help you yet. This isn't some clever tactic. It just happens to be true. Before you have a conversation with somebody, you don't know if they're the right fit for you or if there might be some reason why they're not a good fit for you. That's totally okay.

So instead of taking the approach of I just need to call more people, have more meetings, do more cold outreach, take a step back. Think about what are the five or six different problems that you're good at solving. Then when you reach out, you describe here are the top two or three that I believe are going to resonate with this particular client. When you describe those, you're much more likely to pique their interest.

Instead of saying, here's what we do, which is likely going to respond with well, we already do that, or we already have some does that. Instead, if you describe the specific types of problems that you solve, they might be thinking to themselves, our current vendor doesn't solve that. We have someone who would be great if they could solve that, but they don't. Maybe I should talk to these people. Then as soon as we pique their interest, we say, well, when people are looking for help, they usually do one of these three levels, and we use the Client Vision Pyramid. And that way, we're focusing on the people we can help the most.

See, in most businesses, it's not a lack of opportunities that causes growth to stall. Instead, it's a lack of the appropriate amount of time to spend on the right opportunities because you're spending too much time on the weak opportunities.

So, the next time you hear someone in your office says, oh, we're just going to make more calls and have more meetings, that may be true if you're not talking to anybody. But more often than not, what you really need to do is step back, define that message, build that Client Vision Pyramid, and then when you have conversations with people, you'll be able to quickly stand out from the competition and attract the interest of people you can help the most.

If there are additional topics you'd love to see on the Same Side Selling podcast, you can always drop me a note to Ian@IanAltman.com or, of course, visit SameSideSelling.com for more information to catch any of these episodes. See you next time.