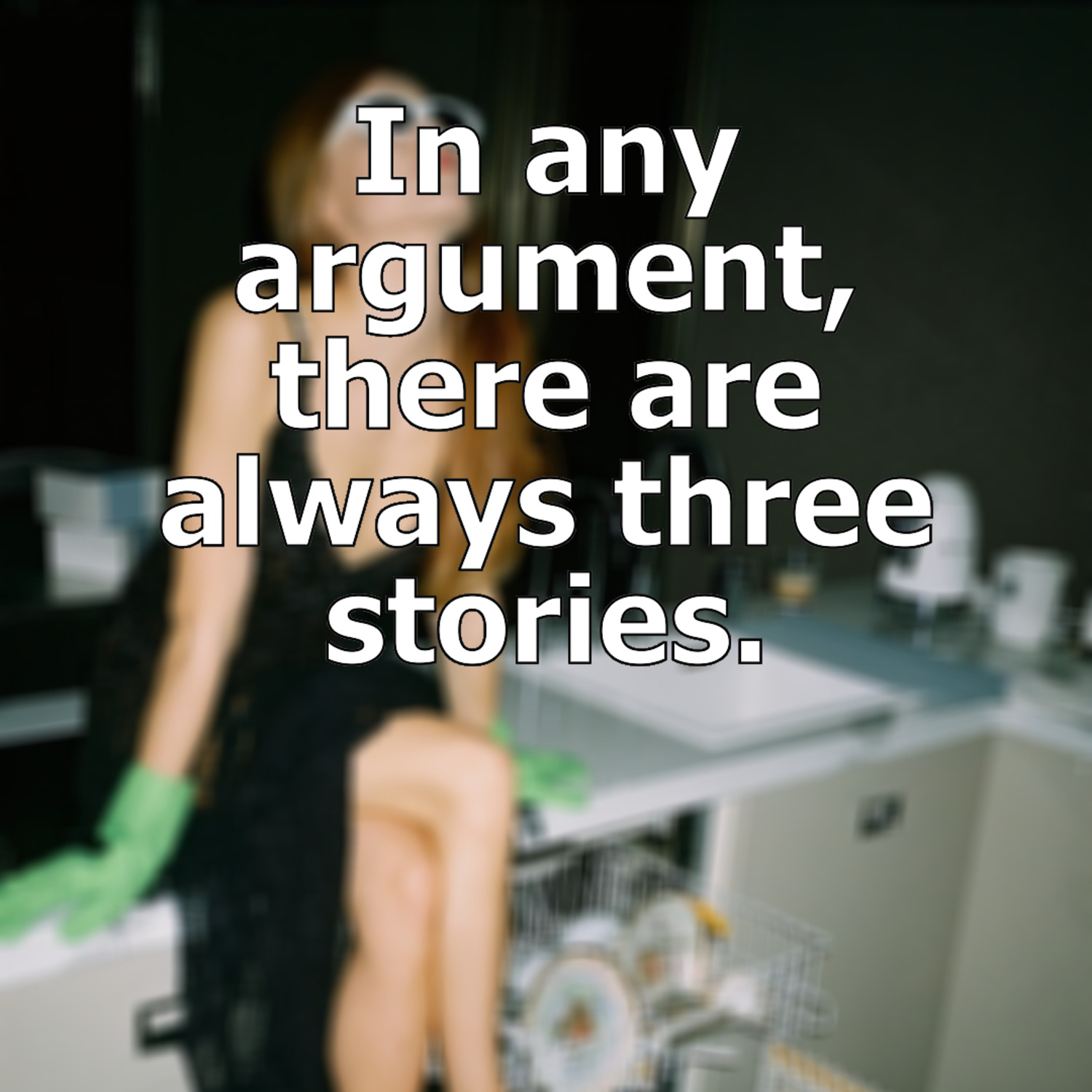 In conflict, try to imagine a neutral observer and the “third story” theyd tell so you can identify a set of facts about the situation that both parties can agree on. Harmonious relationships begin when we abandon our egoistic need to be right.

Letting go of your ego in interactions with others is easier said than done, but it really is the quickest way to restore harmony. When you are crusading for your own point of view and valiantly battling everyone until you strong-arm them into agreeing with you, you forget one crucial detail: you might be wrong. And worse than that, you could be mistaken in the belief that you can frame the situation as right and wrong in the first place!

Basically, clinging to your own perspective and wanting to broadcast it as The One True Way gives you serious tunnel vision. It shuts you off to the reality of the situation . . . a reality that inconveniently contains everyone else and all their thoughts and beliefs. Whenever there is more than one person, there’s going to be more than one reality. And that’s just fine.

Now, we should be careful here—we’re obviously not saying that personal feelings trump objective reality and plain facts. But we are saying that in arguments or disagreements, it’s seldom about plain facts at all. Rather, every person’s reality contains their perspective, their values, the unique past experiences, their personal identity, their particular narrative on the issue at hand, and the outcome they most want. This is more akin to the emotional content of communication than the objective content (i.e., facts).

As the old saying goes: in any argument there are always three stories—yours, mine, and the truth. Though this is simplifying it, the idea is sound. In no interaction is any single person one hundred percent “correct.” You simply cannot think this way. If you read that sentence and think, “Well, what about those crazy flat-earthers? They believe something that’s patently false. In an argument with them, I know I’d be one hundred percent right.”

Firstly, this observation perhaps explains why flat-earthers get as much media exposure as they do—people love to feel superior to them! Secondly, if we remember the difference between objective content and emotional content, we will see that even this example is not as cut and dried as it seems. If someone says, “The earth is flat,” then you might respond, “no it isn’t, what a moronic thing to say.” But what if someone said, “I’m overwhelmed and frightened by the complexity of the world, and I feel distrustful of a government that has demonstrably led me astray for profit. I know I sound nutty, but conspiracy theories give me a sense of control over the world. I hate how reductive and dehumanizing science can be, and how pompous scientists are, and in going against them, I feel like I restore some of my own humanity and agency. Plus, my parents constantly undermined and devalued me as a child, and that’s why today I have a vehement need to assert myself and not be told to shut up or that I’m stupid.” How would you respond to that?

In any interaction, nobody has an exclusive right to “the truth.” Nobody has the right to claim to be a perfectly, neutral arbiter of reality (which, incidentally, is what many people think they are accessing when they claim to be “on the side of science”). Each of us has our own set of biases, expectations, past experiences, beliefs, and perspectives. Each of us colors our interactions with our feeling tone, our personality, our style of communication, and our values and priorities. None of this is ever neutral. And in this specificity, we are all equal to one another.

Whether we agree or not on superficial facts or data is irrelevant (after all, how often do “facts” actually change?). These superficial details are in the realm of ego and conflict. If we go beyond this realm, we can do something better than compete with others—we can understand them. Approaching conversations this way takes courage and honesty. Many of us unconsciously believe that we are the center of the universe and that what we think is obviously the best and only way to think, or that it’s only our perspective that ultimately matters.

One amazing way to counteract this kind of short sightedness is the “third story” approach. The next time you’re in a conflict, imagine a third, neutral observer watching the situation unfold. Now, imagine how they would relate the narrative—i.e., the “third story” they’d tell. Look at all three stories and become curious about the differences between them.

See if you can agree with the other person on this third story. This is where the magic happens, as it can put you on the path to mutual understanding and compromise. The third story becomes an anchor or a shared reality that both people can hold on to even as they inhabit their different perspectives.

For example, a couple are planning a wedding. One of them starts spending money immediately, saying he only plans to get married once and he intends to do it in style. No expense is spared. The other is freaked out at the prospect of so much money being spent, and she’s petrified of starting her married life in debt. They both find themselves arguing more and more until a big blow out over the exorbitant cost of a four-tier chocolate fountain.

His story: Weddings are joyful occasions, as well as a chance to show your family a good time and boast a little to your friends that you can afford the luxury. The degree of love and commitment in the relationship is proportionate to the amount of money spent. Basically, stinginess = the couple isn’t really in love.

Her story: Weddings are solemn, meaningful occasions that are about commitment and intimacy. They’re a time to demonstrate your values to others. Spending a lot of money on a wedding is vulgar and financially unwise. Couples who splash money around come across as insincere and materialistic—they must be compensating for a lack of true love!

Well, what about the third story?

Isn’t that so much more . . . relaxed? Seeing things this way, they can both see that the problem is their different expectations of what a wedding should be. The problem is not that she’s wrong or that he’s wrong. If they can keep returning to the third story, they locate the real root of the trouble and give themselves a chance to solve it rather than going round in circles about this bill or that bill. Now, they have a real chance of finding a compromise.

They can both identify their deeper needs in the situation and seek to make sure they both have those needs met, with as little conflict as possible. Again, it’s us versus the problem. Granted, they may not magically make all the tension disappear. And after a while, they may discover that their differences are actually not reconcilable. Using the third-story trick cannot magically erase all differences and frictions, but it can help you get an honest handle on them and give you the best chance of compromise—which you don’t get at all when you’re each just arguing your own perspective.