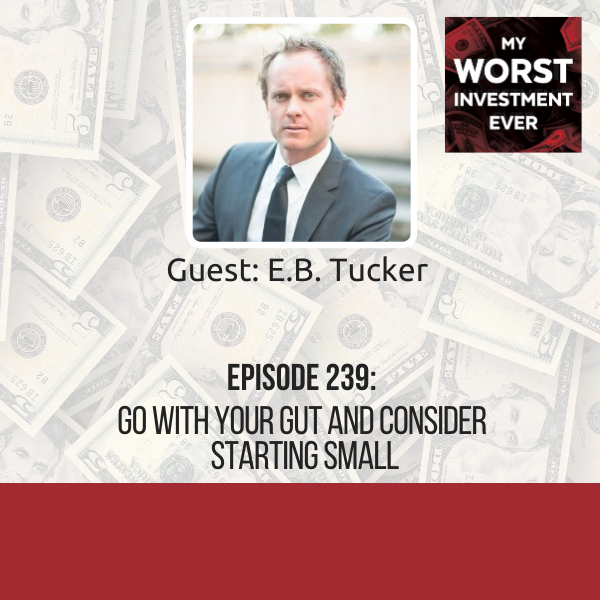 E.B. Tucker is the former editor of The Casey Report, Strategic Investor, and Strategic Trader. He is a board director and major shareholder of Metalla Royalty & Streaming (NYSE:MTA), a gold royalty company. He is the author of Why Gold? Why Now? The War Against Your Wealth and How to Win It and has more than two decades active in capital markets.

“It’s okay to get a bruise, but don’t get completely broken.”

About 17 years ago, E.B. was trying to get into the world of finance, but he kept hitting walls. Everyone wanted to hire him as a sales rep because of his charismatic nature. However, E.B. wanted to manage money not to be a salesman all his life. So he kept trying.

Finally, in 2006, one of E.B.’s friends told him about a guy he’d met playing golf, who was trying to restructure his company. The guy was looking for a sales V.P. The position came with an equity position right away. To E.B., this sounded like a winner.

What the heck did he get himself into?

E.B. got to learn that the company was not trading on the primary exchange and wasn’t compliant with its filings. Therefore, people could buy stock in it, but they’d not be buying the stock in the New York Stock Exchange. They’d just be buying it on an off-market.

Getting his friends to invest in the company

The company claimed to have natural pest control and was raising money to get the product off the ground. E.B. introduced some of his friends who invested about $150,000.

He then went out to meet the CEO at their facility, and this was a disaster. E.B. found the CEO strange and was like some kind of cartoon character. He came back a little bit put off by this, and his gut feeling told him that this CEO was not straight.

A week later, he found out that the company didn’t have the federal EPA licenses that they claimed to have in the presentation to investors. Worse still, E.B. found out that the permit they claimed to have did not even exist, so the whole thing was made up. On top of that, they had already spent the money that E.B. had raised. He couldn’t tell how it had been spent to help the business, though.

When he realized that the company had real issues, E.B. went to the guy who got him in and told him about the problems he’d noticed. The guy dismissed him and didn’t want to have that conversation with him. It seemed apparent that the guy knew what was going on.

The company stopped paying E.B. when he brought these issues up. He was there only two weeks before they cut him off. E.B. decided to hire a lawyer to represent him in documenting all these issues. The lawyer wrote a letter documenting all the fraud that E.B. had found and sent it to the board’s certified mail. This cost him about $10,000.

Next, E.B. hired another lawyer who was excellent at figuring out how to get his friend’s money back in about six months. This was quite a tough time for E.B. because he had the best of intentions and was just trying to break into the finance field.

Go with your gut

When people are pitching all sorts of ideas to you, do your research, ask questions, but don’t forget to listen to your instincts.

If you’re not sure whether an investment is right for you, but you want to try it anyway, go in small. If things work out, you can always invest more later. Don’t feel pressured to invest all of your money, especially when your gut feeling tells you that there could be a problem.

Let go of the investment whenever you feel intimidated by someone that’s pressing you to invest.

Don’t be afraid to take risks

Take risks. You have to be in the game to win. But pull back, especially if your instinct tells you there could be something wrong.

Do your research BEFORE you invest

Most people fail to do their research before investing and, oftentimes, do it after investing.

The best way to manage risk is to reduce your investment size. You may have failed to assess the risk, but if you manage it well, the damage isn’t going to wipe you out.

If somebody is pressuring you to invest, you got to step back, because either they’re desperate for money, and that’s a problem, or they’re manipulating and lying to you.

Go, but go carefully. Take risks, but don’t forget to be careful not to risk everything.

“We’re all on our journey, but we can learn from each other.”