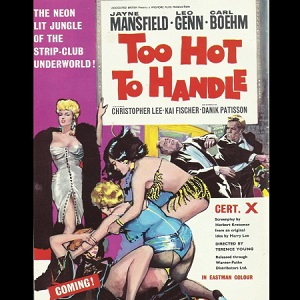 For the first part of episode 26, we headed out to Fontaines bar in Dalston (Stoke Newington if you’re an estate agent, Dalston if you’re “street”) to catch a screening of the kitsch, sexploitation B movie from 1960, Too Hot to Handle.

The film was one of two that its star, Jayne Mansfield, made in the UK that year. Jayne plays Midnight Franklin an exotic dancer at the The Pink Flamingo club in Soho and Leo Genn plays her love interest, Johnny Solo (there’s only a 28 year age difference so that’s fine then). Christopher Lee plays the club’s sinister manager, Novak, and Austrian actor Karlheinz Böhm plays a French reporter writing a feature on Soho nightlife. Chirpy, cockney national treasure, Barbara Windsor turns up in the film as chirpy, American(!) exotic dancer, Ponytail.

The screening was put on as part of “Lobotomy Room” – a regular film night at Fontaines run by Graham Russell.

Too Hot to Handle was made in Eastman Colour but the only prints in circulation (that haven’t been dubbed into German) are in black & white. Here’s a taster of the colour version.

We spoke to Graham briefly after the screening but met up with him in the glorious Soho sunshine a couple of days later to discuss his love of Too Hot to Handle and its star, Jayne Mansfield.

Because you probably missed the screening at the Lobotomy Room, here’s the full film in all its black & white glory.

Find out more about the Lobotomy Room HERE

Or follow Graham on Twitter for news of upcoming screenings at the Lobotomy Room and check out his sleazy, trashy Blog. Read an interview with Graham HERE

And if you’d care to venture to Dalston / Stoke Newington, have a cocktail at Fontaines.

Most scenes in Too Hot to Handle, even the Soho street scenes, is shot in a studio. Have a look at the few genuine locations on Reelstreets.