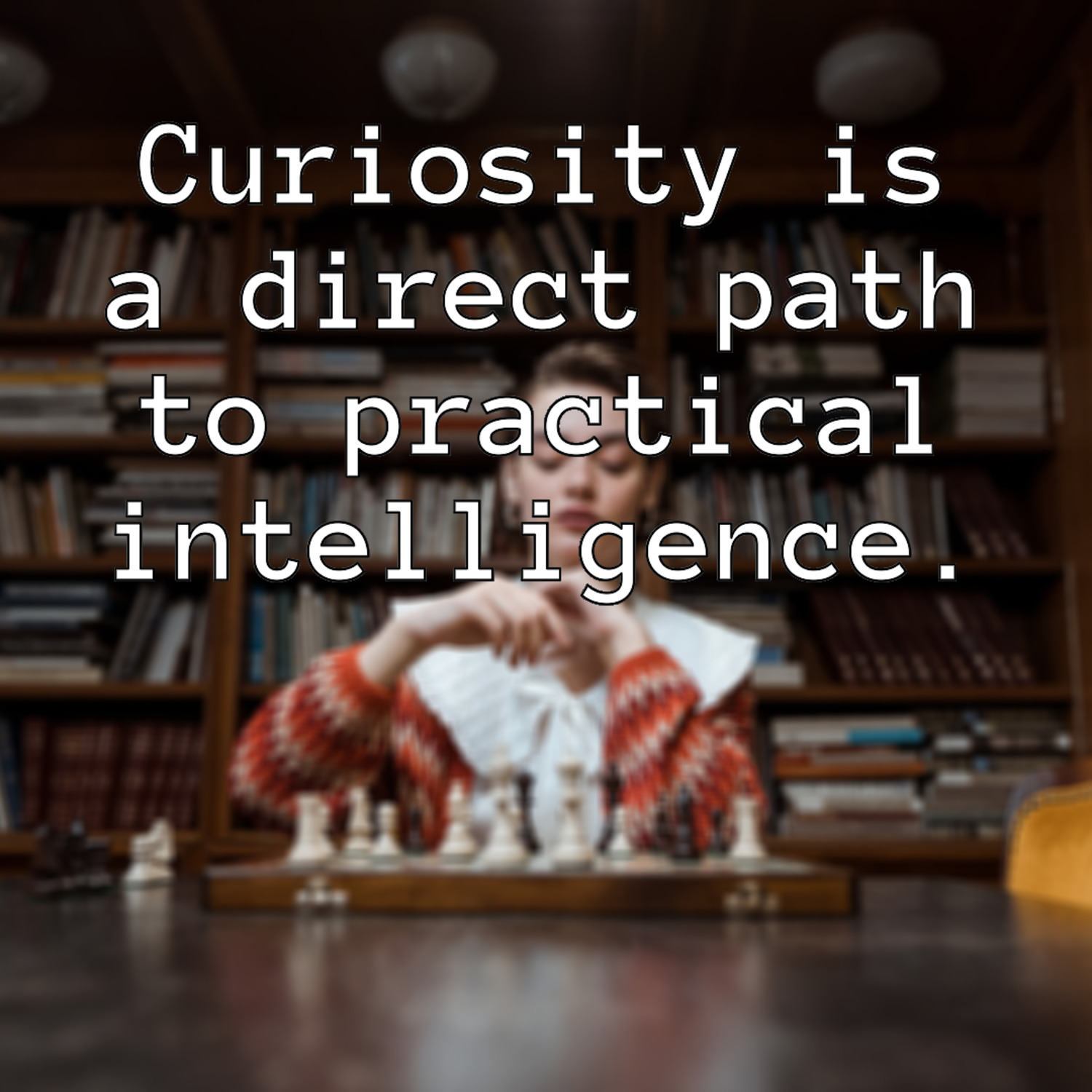 The first and most natural way to probe below the surface is through cultivating curiosity. There are five types of curiosity, each of which can be a motivation for asking questions: joyous exploration, deprivation sensitivity, stress tolerance, social curiosity, and thrill-seeking. However, curiosity will rarely come easily or naturally, especially about things we don’t have an innate interest in. So, we need to generate that same approach through other methods.

The most powerful tool we have in overcoming our desire for certainty and looking beneath the surface isn’t pre-existing intelligence or judgment. It’s simple curiosity. However, many of us have not been truly, genuinely curious since we were little children. Why? Because somewhere along the line, we decided that the feeling of certainty was preferable to uncertainty. Because we have gotten into the habit of rushing towards a known, graspable conclusion (no matter the quality or value of that conclusion) in favor of staying in an open-ended, undecided state for as long as possible. Basically, it’s because our ego got in the way.

From discovering fire and the wheel to the theory of relativity, all human knowledge sprang from someone being curious. It came from a drive to know more about the nature of the world. Nobody made these grand leaps from a position of thinking they already knew. They got there because they had the simplicity and humbleness to say, Wow, this is weird. I have no idea what’s going on here. I wonder what this is? I wonder what happens when I…?

A question is infinitely more valuable than a statement regarding independent thought. Ask a question, and the world responds. Make a claim, and your dialogue with reality stops.

Curiosity drives one to dive deeply into the nuts and bolts until they come to a solid comprehension of a subject or situation. And when they get to that point, they’re eager to learn more. It’s a self-perpetuating trait; the more you have of it, the more you want it. And if you have enough of this one mindset, you will be well-positioned for deeper thinking.

Curiosity is a direct path to practical intelligence. Pursuing your curiosity will help you learn and perceive things that other people won’t. Developing your inquisitiveness is vital to building your knowledge and awareness. Every field of thought or knowledge, without a single exception, is easier to learn if you keep your curiosity front and forward. It’s how you can naturally get to the heart of things and comprehend deeply.

But curiosity isn’t automatic, and it’s not something you just will into existence. Furthermore, some of us are blocked from curiosity because of fear: we tend to have severe anxiety about the unknown, and that anxiety can be particularly high when we’re about to find out about the unknown.

We need to delve more deeply into the nature of curiosity to understand how it works and how we can use it. It’s a far more versatile tool than you might initially expect, and can help you think in smarter ways. Think of this as a preliminary mindset to digging beneath the surface effectively on any topic.

Most of us would think, understandably so, that being curious is just a simple matter of having a higher interest in learning things or having new experiences. When we say someone is “naturally curious,” we usually mean they are more motivated by this interest than other people. But in reality, there’s a lot more to curiosity than simply having a strong desire to know more—people can become curious for quite a few distinctly different reasons.

Psychology professor Todd B. Kashdan from George Mason University spent a considerable amount of time researching the nature of human curiosity. Kashdan sought to nail down the diverse characteristics of curiosity into what he called “dimensions.”

Kashdan conducted a study with over four hundred participants who answered three hundred personality questions. Analyzing the data he received, Kashdan developed a model of curiosity that identified five dimensions of curiosity. These aspects reveal how certain people are motivated to be curious in the first place. Knowing these dimensions and how they work might help you fire up your own curiosity engines. Kashdan’s dimensions include:

1. Joyous exploration. When considering the nature of curiosity, this dimension is probably what we’re picturing: the simple thrill of discovering and experiencing things we don’t yet know about. The joyous explorer views new knowledge as a component of personal growth, which is its own reward for them. They’re genuinely excited about reading all of Shakespeare’s plays, trying sushi for the first time, or riding cross-country in a race car. Amassing a wealth of different experiences and knowledge simply makes them happy.

2. Deprivation sensitivity. On the other hand, this branch of curiosity is more about anxiety. Someone working from this dimension feels apprehensive or nervous about their lack of information—being “deprived” of knowledge makes them uneasy. To reduce this pressure, they engage their curiosity. The deprivation sensitivity dimension comes into play when we’re trying to solve a problem, getting up to speed with our comprehension, or considering complicated ideas.

For example, if you’re balancing your bank accounts and find you’ve spent more than you have on record, you get a little nervous, which in turn makes you go through your receipts to see if you’ve missed anything. If you’re taking a philosophy class and the material’s going way over your head, you feel anxious about your abilities and study a little harder (if you haven’t let fear stop you, that is). When you finally discover the information you’re seeking, your discomfort will—theoretically—stop.

3. Stress tolerance. Whereas deprivation sensitivity relates to how uncomfortable one feels about not having certain knowledge, the stress tolerance dimension focuses on the uneasy feelings of getting that knowledge or taking on a new experience. People with high stress tolerance in their pursuits are more likely to follow their curiosity. On the other hand, someone who can’t deal with the uncertainty, disorder, or doubt that arises when exploring new ideas or having new experiences is less likely to let curiosity lead them.

Take two people who have never been on a roller coaster before and are in line to do so at an amusement park. Both of them are at least a little nervous about it because it’s a new thing for them. One of them is more willing to confront their fears—they’ve done so before with other things and have always survived—so they’re able to fight through their anxieties and get onboard. However, the other one lets their fear reduce them into a quivering mass of exposed nerves. They have to take the chicken exit and miss out on the roller coaster.

The first person clearly has a higher ability to tolerate stress, go past their fears, and follow their curiosity for a new experience. As for the second person, well, let’s hope they really like the merry-go-round because that’s pretty much all they can handle.

4. Social curiosity. This dimension of curiosity is simply the desire to know what’s going on with other people: what they’re thinking, doing, and saying. We indulge this curiosity by interacting with or watching others. We’ll have a conversation with a friend because we’re interested in a movie they just saw, or we want to hear their opinions on current events, or we just have to share in the latest gossip they’ve heard.

Social curiosity can also come from a more detached point of observation. A great example of this is people-watching in a crowded place, like a bus stop or Central Park. We might see a couple having a spat, or a couple of kids playing a game they just made up, or a man walking his pet duck. (It happens.) Based on what they’re doing or saying, we might form certain judgments or opinions about how they are or behave in a more private situation. Curiosity drives us to study them.

5. Thrill-seeking. This aspect is similar to the stress tolerance dimension, except a thrill-seeker doesn’t just tolerate risk — they actually like it. A thrill-seeker is more than happy to place themselves in harm’s way just so they can gain more experience. For them, it’s worth the gamble of physical jeopardy, social disavowal, or financial ruin just to have an adventure or encounter something new.

Look no further than Richard Branson, the hugely successful entrepreneur, for a thrill-seeking example. He’s tried to balloon around the world. He’s tried to race a boat across the Atlantic. He’s stood valiantly in the path of oncoming storms that destroyed everything else in the immediate vicinity. Branson claims to have had seventy-six “near-death experiences,” including one where he went over the handlebars of the bicycle he was riding. Branson escaped with only minor injuries as he watched his bike go off the edge of a cliff. Clearly, Branson feels extremely comfortable in situations where there’s an element of danger. That’s your thrill-seeker.

Curiosity is pretty easy and automatically generated for the joyous explorer and thrill-seeker. It’s the same for the socially curious, depending on the situation and who surrounds them. For these three dimensions, curiosity is a welcome and comfortable condition. If you’re aware of the positive benefits of something, it’s easier to indulge in them. But we may not always feel that way, so we can’t depend on it.

If you’re resistant to curiosity, you might serve yourself by considering the origins of your anxiety. If you’re feeling awkward about not being “in the know” or left out of the loop, you could use that motivation to drive you to amend that situation (deprivation sensitivity). If you’re unable to fight through your fears, consider ways to rationalize them and get stronger (stress tolerance). Overall, we just want to understand what drives us toward and, conversely, what prevents us from embodying a curious mindset. Knowing the driving motivation helps.

The remainder of this chapter will look at techniques and approaches that can at least simulate a sense of curiosity to help bring you to new knowledge and experience—therefore helping you go beyond the surface level and get to the bottom of things.

We can’t all naturally think, “Hey, what does that really mean?” so these mental models will help you reach that point methodically.