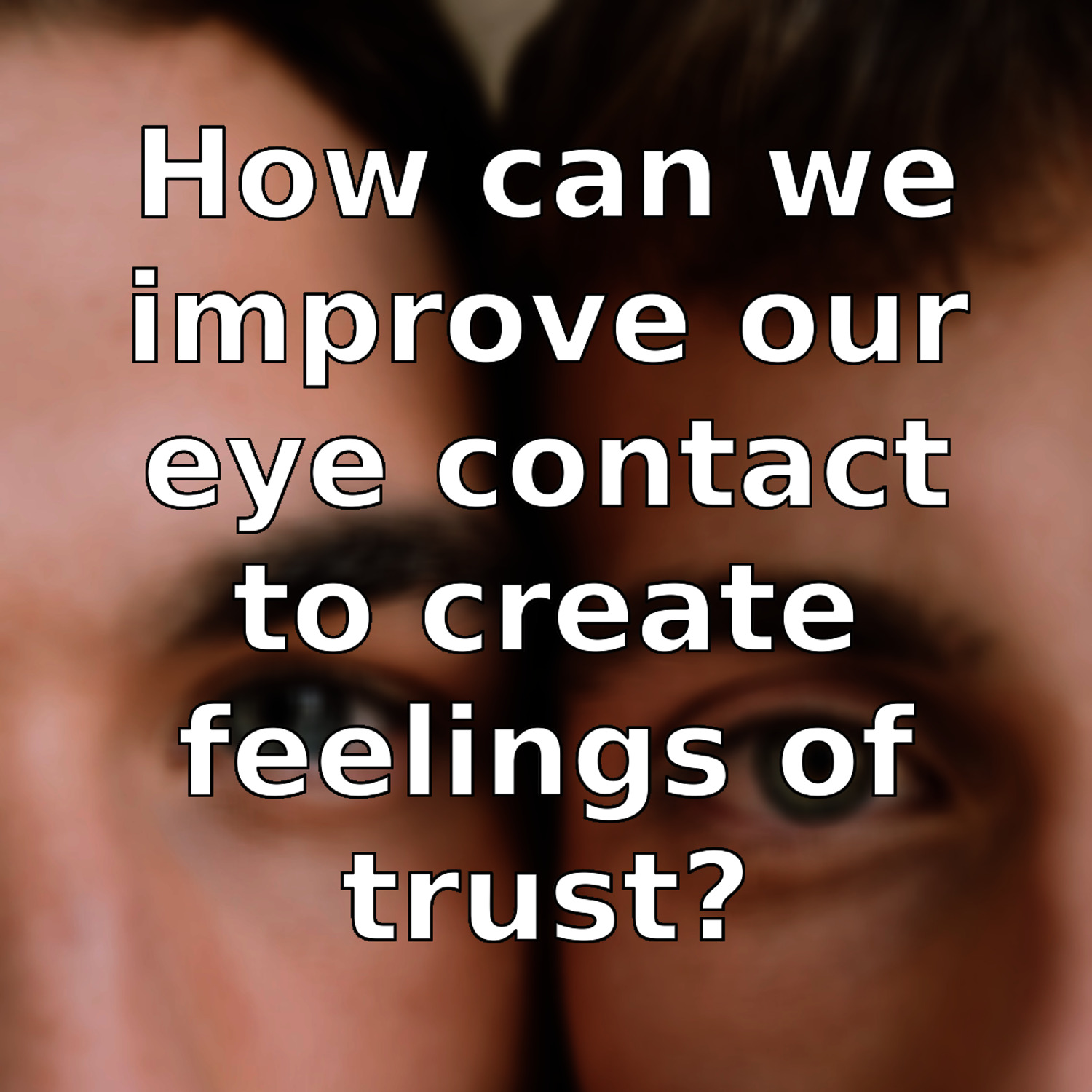 When we think about trust, one of the first places our minds will go is to eye contact. Whatever the reality, if you aren’t able to use eye contact, people will find you untrustworthy. Thus, eye contact has been found to cause people to attribute positive traits to you and see you as more intelligent and more trustworthy. But how do we wield eye contact without creeping people out or appearing untrustworthy? The thin line appears to be around three seconds of eye contact at a time, with sufficient rest between gazes.

Of course, eye contact is the other main component of how we perceive attraction and even rate it. As a society, we view eye contact as imperative to attracting a mate.

Surely, you’ve heard many times before that eye contact is important. Eyes are the window to the soul, you can tell someone’s goodness just by looking them in the eye, he wouldn’t look at me in the eye and lie, and so on. If you look up advice on dating, job interviews, sales, or just making friends, sustained eye contact will no doubt make the list as a key to what you want. We believe eyes convey emotion and empathy and that we can literally feel it from others when we lock eyes.

repeatedly, most recently in: 2012

So while the lack of eye contact doesn’t actually say anything about others, it may as well be true if people make those assumptions about you.

On the other hand, there is a truly significant number of positive assumptions that we make about people who make eye contact and that can surely improve people’s perception of you. Generally, people who make eye contact are seen as more dominant and powerful; warmer and more personable; more attractive and likable; more qualified, skilled, competent, and valuable; more trustworthy, honest, and sincere; and more confident and emotionally stable. In other words, just about all the things that are associated with social success.

Why do we care so much about eye contact or the lack thereof? Is it just because we have been told from childhood to look at people in the eye and give them a firm handshake? Of course, it turns out that what may have started as old-fashioned advice from an older generation truly has many scientific confirmations.

Oddly enough, you probably knew the outcomes of these studies already. Whether they represent the truth or are just assumptions, we have to make sure that we don’t fall on the wrong side of those studies.

As we are increasingly more caught up in a battle for our attention between our phones and our real-life conversation partners, the ability to make eye contact has become an especially powerful tool. When you can utilize eye contact smartly to show somebody that they have your undivided attention, you can effectively win them over and enhance their perception of you.

There was never a need to convince you about the role of eye contact in trust, but there is one rather large caveat with eye contact—how should we use it? We can’t simply stare into someone’s eyes and try to read their souls. That is extremely uncomfortable and unsettling. In fact, eye contact has been shown to consume a significant amount of our brainpower and focus when we utilize it.

So how can we improve our eye contact to create feelings of trust? It has to start from the scientific evidence that people feel uncomfortable with a lot of sustained eye contact, but they also feel that you are a shady character if you don’t provide enough. Where is the thin line where you are making your best impression and being most likable?

When you speak, you want others to be comfortable having their attention on you, but you also want to make sure that you don’t appear to be hiding something or feeling uncomfortable yourself. And as you listen, you want whoever is speaking to see that you are engaged, but you don’t want to look at them so much that they might feel creeped out. As long as you are in the general ballpark of 50% and 75% for speaking and listening, respectively, you’ll be making the most out of the surprisingly powerful tool of eye contact.

The next level of creating attraction without saying a word is through touching, of course.