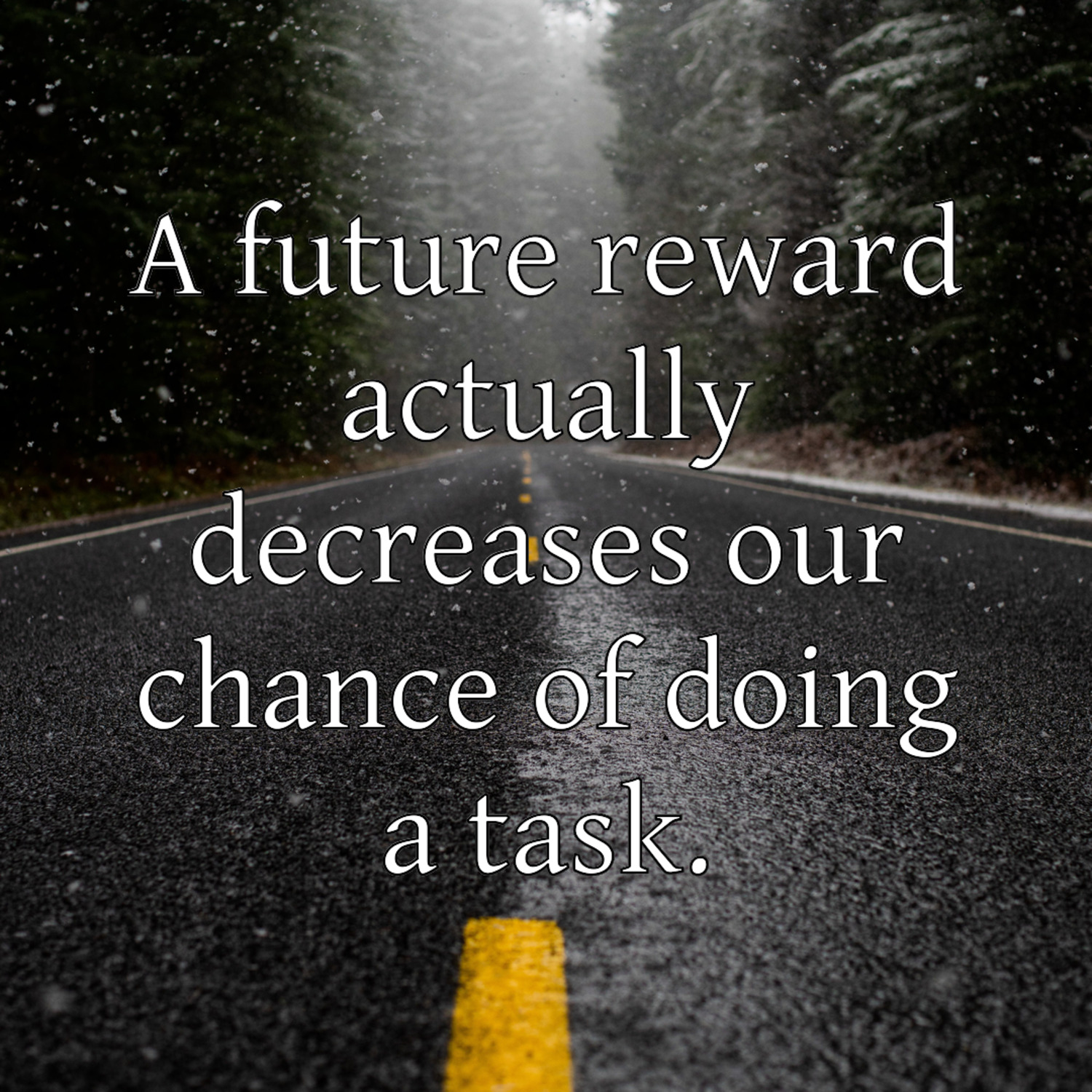 A to-do list hastily written on a Post-It might be one of the most ubiquitous tools for self-discipline and avoiding procrastination. It works on our psychology by manipulating dopamine, and this is one of the few instances that we can actually make our brains work for us. But ultimately, a to-do list just makes sure that things are not being forgotten or falling through the cracks, and it doesn’t necessarily assist you in doing more. It just prevents you from doing less. Thus, we need to level up the humble to-do list.

We can start to do this by trimming the to-do list down to three items per day (yes, only three) to keep focused and lean. We can also set an intention or overall mission for the day and add only five (two big and three small) or nine (one big, three medium, and five small) tasks to the list in support of that mission. We can also add an element of reality-testing by evaluating your tasks through the metrics of seriousness, urgency, and growth in order to easily see what to prioritize.

Get the audiobook on Audible at https://adbl.co/3HhRPIm

Having considered so many of the reasons that we procrastinate and the different approaches we can take to undoing this habit and getting back on track with the tasks that will lead us to our dreams, it’s time to take another look at that old organizational classic: the to-do list. It hardly needs an introduction. By making a list, you keep track of what needs to be done, you reward yourself when you do it, and you have a log of what has already been done, often using nothing more than a pen and paper. You make sure that nothing slips through the cracks, and you can carry on item by item in an orderly fashion. Even if you’re just writing tasks down on a Post-It to remember for later, you’re using a form of to-do list and reaping the benefits. As it turns out, there are many variations to this simple theme.

Of the methods we’ve discussed so far, this one arguably actually has the most to do with psychology. Essentially, it’s a technique that works with your brain’s inbuilt reward system via the neurotransmitter dopamine. The principle is simple: when we get something we want—a promotion, an ice cream cone, a kiss from a loved one—our brain releases dopamine. It’s called the “feel good” hormone because it does just that: makes you feel good, want more, and seek it out continually.

If you can work with, instead of against, this very basic mechanism, you can make it so that you enjoy and want to do those tasks that might ordinarily make you procrastinate. Make a list. When you cross that item off, you get a little rush of dopamine and feel a flutter of achievement and progress. You associate the task with pleasure. Result? You’re more likely to do that task, or one like it, again. By tethering a task to this good feeling, you’re associating your work with pleasure, making it more likely you’ll do it. It’s really that simple, but this type of addictive tendency applies to all things in our lives, good and bad.

If you’ve battled “screen addiction” or distractions in your work, you probably already know that it’s because all those activities have become recognized by your brain as sources of dopamine release. If you can make doing your to-do list as enticing and pleasurable as the notification alert sound on your phone, perhaps you’d get addicted to doing your chores instead!

Of course, there’s no special magic in the list itself—it’s what the list represents. The release of dopamine accompanies feelings of accomplishment, pride, release, and progress. It’s so satisfying that we want to repeat the experience. Will it work for tasks you truly dislike, though? Actually, you might find that these work even better for those tasks—after all, the sense of accomplishment is greater. You just have to make sure that you can tick boxes frequently enough to keep the dopamine flowing.

Some people even find that knocking off mundane chores from a to-do list becomes empowering, stress-relieving, and deeply satisfying. After a stressful day at work, for example, where nothing went right, it might actually be therapeutic to come home and obliterate your cleaning list, giving yourself those much-craved feelings of efficacy, completion, and achievement.

How can you use the dopamine-power of to-do lists to their best? This even works with the most mundane of to-do lists, though we will delve into specific types soon.

First of all, squeeze as much from them as possible by making the tasks small for the highest number of dopamine “hits.” Again, we see why it’s so important to break a task down into manageable chunks. As you cross something off the list, really take the time to savor that sense of satisfaction. Clearly and deliberately obliterate it from the list; bask in the sense of accomplishment and reward. There’s a reason some people don’t just tick an unpleasant item from their list but scratch it out ferociously with a pen like they’re killing it! Oh, it feels so good.

Though it seems obvious, what Zeigarnik noted was that the brain will always prioritize and focus on what it perceives as an outstanding task. She found in her research that, if people were interrupted mid-task, they remembered the details of the task far better than if they were asked to remember details about it after they’d already completed it. In other words, uncompleted tasks are better remembered.

Knowing this, it might make sense to make sure you’re getting your dopamine hit at the right time so that you’re incentivizing yourself to complete a task rather than disengaging because the “reward” has already been experienced. Practically speaking, don’t be tempted to tick items off the list prematurely. Some people believe that announcing grand plans before you’ve taken action toward realizing them has the same effect—in announcing your goal, you get a brief flash of dopamine akin to actually having completed the task and are therefore less inclined to actually do it.

Time to be honest about your to-do list, if you have one. If yours is mostly left uncompleted at the end of each day, is packed full of vague (i.e., not smart) goals, or overall makes you feel less organized, you need an update. Again, let’s remember that the list itself is nothing special—it’s what it represents. A list needs to be focused, relevant, and achievable. It needs to work, and there are multiple ways to be strategic in how you organize it. What works for one person may not work for another; in the end, it doesn’t really matter which method you choose.

One way to de-bloat a to-do list that’s gotten too long for its own good is to simply ignore everything except a maximum of three tasks per day—make sure to list out smaller subtasks that fall under those three larger tasks to get the ball rolling for yourself. You tackle these first and foremost, and you list everything else under the “nice to do” category. Even if at the end of the day some items remain undone, you get the satisfaction of knowing your most important tasks were completed. We have a limited amount of energy each day, so spending it on the most important tasks you’ve identified could make sense. It turns out that many tasks that we think are important can afford to be pushed or postponed without any negative effects—this is something we’ll cover later when we talk about the Eisenhower Matrix. And of course, with only three items, there is something motivating about actually accomplishing what you set out to do for a day instead of only chipping away at an enormous list that makes you feel like Sisyphus pushing the boulder up a hill.

Other people like to look at the day ahead holistically and set an intention for what they want to achieve overall. It may be something like “Today I’ll commit to facing my challenges head-on and calmly,” or it could be “By the end of the day I want to feel more in control of this project and a bit clearer on the way forward,” and so on. This could manifest as a tangible, quantifiable result (“I want to have read these five chapters by the end of the day”) or not. That’s up to you. Call it a mission of the day, which then ends up setting the tone for all the tasks to follow.

With the sole intention and mission spoken into reality, it’s time to think about the to-do list that supports them. Bearing the Pareto principle in mind (focus on the 20% of the work that gives 80% of the results), try to narrow your list into two larger tasks and three smaller tasks. Larger tasks will take up to two hours to complete, while smaller tasks will take up to 30 minutes to complete.

Intentionally limit yourself to those five task slots a day—this also sets an upper limit on your workload of roughly 5.5 hours a day. Depending on your context and capacity, you can also create nine slots overall: one large task, three medium tasks, and five small tasks. This will still provide focus and intention while limiting the number of tasks on your plate.

These limitations truly force you to cut down on overwhelming feelings and force you to think about what’s really important and what is really leading to your intention and mission. It’s like you’ve set a deadline for yourself, which means that you can’t dillydally or squander time like you normally would. So take a while to identify each task and get an idea of why you’re doing it, what’s needed, and how long it will take. If you’re timeboxing, schedule these items, building in ample room for breaks and an opportunity to appraise and adapt as necessary. If you’re “unscheduling,” commit to finding the flow for at least 30 minutes and go from there.

From here, we go slightly backward: how do you actually decide what’s most important and what is a big or small task? When you have many different things that need to get done, it can be difficult to know where to start. To succeed with your to-do list, you’ll need a way to determine which projects should come first and which can wait. And in fact, assigning value and weighting your to-do list becomes another type of method in itself. One of the most popular ways to do this is to rate using three metrics: seriousness, urgency, and growth. Seriousness speaks to how important the task is, urgency notes how soon the task is due, and growth describes how quickly the problem will get worse if it isn’t handled immediately. These metrics place your tasks into the real world and look at consequences.

Rate your tasks on a scale of 1–5 for each category and see how things shake out. You might be surprised. An additional factor might be to analyze the amount of time each task takes. Now you truly have a dynamic to-do list that is more helpful than a series of bullet points.