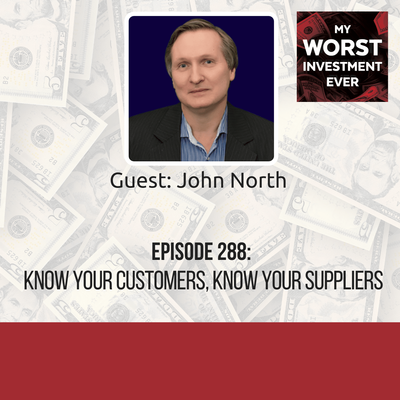 John North is a Seven-Time #1 International Selling Author about business strategy and internet marketing and his passion for squash. John is CEO of Evolve Systems Group and has created many products and services designed to empower business owners, including Evolvepreneur.app, Evolvepreneur.club, and Evolve Global Publishing.

John’s passion is to help business owners become more strategic and smarter about their marketing efforts. He continually pushes the envelope of what’s possible in this modern era and is widely regarded among his peers as very innovative and highly creative in his approach.

“Own your brand, own your customers.”

John had a software distribution company on one side of Australia, and his competitor had a similar company on the other side. The two had healthy competition, each with their customers.

John and his competitor decided that it was a good idea for the two businesses to merge and distribute their products together. So they did a 50/50 partner split. The merger seemed good and legit to John.

The two soon-to-be partners set a date to sign the merger documents in Sydney. Even before the ink could dry on the signed papers, his former competitor had announced the merger to everyone without John’s consent. This move severed relationships with some of their customers. John had to do a lot of damage control.

Within six months, John found out that his new business partner had set up another business inside their business. He was trading with this other company. He also put all the good employees and programs in his side of the business, instead of the partnership.

The partnership was quickly going south. John decided to buy out his business partner. He offered him $500,000, which he promptly accepted.

The supplier from hell

John’s supplier decided to bring someone else into the country to distribute the same stuff and steal all his customers. John and his supplier had a war over customers for a whole year. John’s business was losing money due to this trade war.

John’s last option was to sell the company and start something different. He found a buyer, but he never recovered the money he lost in the merger.

Suppliers are smarter than you think. So be careful not to let them outsmart you.

Be careful about being the distributor because it is easy to get screwed when you are the middleman.

Businesses are about trust and personalities

Your product is a secondary item. The people that you work with and the trust that you have are what make your business. A lot of young people overlook the trust element.

Take a step back from the deals you’re doing right now and assess whether you are doing them because of fear. Sometimes fear is very healthy, but other times it drives us to consider doing something that may not make sense. It drives us to do things too quickly and not pay attention to the details.

Don’t make business decisions out of fear. Step back and think things through.

John’s number one goal is to get his software off the ground, particularly in the area of podcasting.

“Own your stuff. And always be looking at the big picture.”