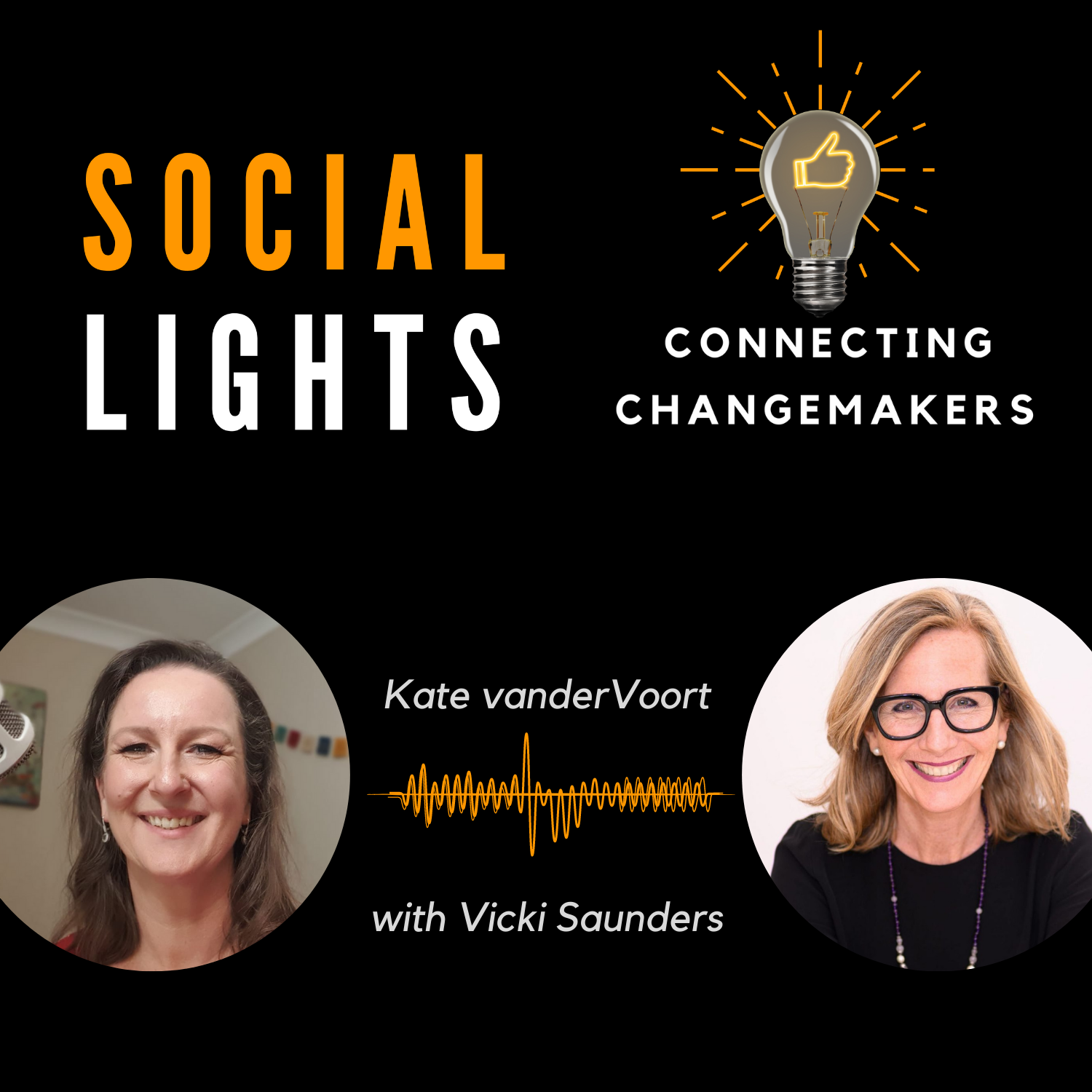 In this episode of the Social Lights Podcast, podcast host and Social Mediology founder Kate vanderVoort chats with Vicki Saunders, Founder of SheEO—a network of women focused on radical generosity.

About Vicki and SheEO

Having grown up on a farm with her parents and three brothers, Vicki learned to work hard very early in life. She grew up in an environment where they would dream at the dinner table and build these dreams the next day. There wasn’t a lot of discussion on failure. If her family had a vision, they would try to execute it.

Vicki’s businesses have always been focused on both doing good and making money. She has done a lot of work with innovation, youth, and women. She spent decades looking at how to create the right conditions for people to thrive and innovate, and how to bring out the best in people in a business context.

On Vicki’s journey as an entrepreneur, she noticed many things about the world that was not designed for women. She felt that there existed a very narrow definition of leadership and success, and that there was only one way to do things—and she was constantly being told that she was not doing things right.

A shocking 2.2% of venture capital goes to women—and Vicki shares that it is statistically impossible for this to happen if not for massive biases existing in our current structures and systems. She thought to herself, “What would scaled-up businesses run by women on their own terms look like?”

In 2015, SheEO was born. This new operating system began with the concept of being radically generous with each other, and thus bringing out the best in people. This ecosystem-based approach brings people together, and enables people to share their gifts to support those with dreams who need help.

Today, SheEO is in five countries, and has funded 68 women-led ventures. All these ventures are working on the world’s to do list: The United Nations’ sustainable development goals.

“What if you just did the generous thing instead of judging, criticizing, pushing back?” (13:44)

Entrepreneurs who have never experienced an environment like that of SheEO’s are blown away. It is a space and place for women innovators to apply and come into an environment on their own terms. These innovators can not only get funding and 0% interest loans payable in five years, but also have access to thousands of women who want to support them and grow their businesses. At SheEO, they don’t dictate the milestones, tell entrepreneurs how fast to grow, or ask for pitch decks. According to Vicki, “It is a shift from scarcity to abundance, from isolation into community.”

“In many ways,” Vicki shares, “it is a healing for all of us to create a different experience for those coming after us—and all of us who are journeying together—to do this in a more human way that really resonates with what it means to be alive on this planet. It’s hard to be human. There’s so much going on—you have no idea what’s going on in people’s lives.”

One steps into the SheEO community by giving first—a $1100 contribution for the year or $92 a month. By doing this, people invest in themselves. One contributes to the whole, and also with a mindset of “I am here to help others.”

The first thing an entrepreneur is likely to hear upon joining SheEO is “How can I help you?” The small amount that one gives is a door into abundance.

Vicki thinks of investment as “What kind of butter do you buy? What kind of food are you buying on a regular basis?” These decisions are an investment in what’s happening locally.

Where people put their money is a critical thing, and so it is crucial to put regular and increased attention to such decisions.

This scenario can be seen a lot during this current pandemic. Supply chains have been disrupted, and so there is a real opportunity to shift how people buy for simplicity and ease. Instead of giant corporations, people can instead support local small neighbours.

Vicki admits that she is obsessed with capital going towards businesses that create a better world. She feels that support should be given to companies that are not extracting from the earth, that treat their people very well, that pay attention to the environment in which they operate, and that interrogate the supply chain to ensure that they work with people that fit their values.

“Our money is a vote,” Vicki says. “Every time we spend our money, it’s basically getting behind whatever what we’re spending our money on and saying, ‘That’s okay.’”

You can find Vicki Saunders and more about SheEO at: