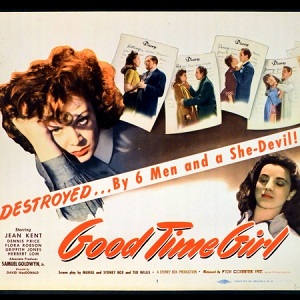 The star of Good-Time Girl is Jean Kent, known throughout the 1940s and beyond as UK film’s “bad girl”. To talk about Jean’s life and career, we drop in to the BFI to meet up with curator, Josephine Botting.

For a few years before she became famous, Jean Kent worked as a Windmill girl. This scan is from the autobiography of Vivian Van Damm, the long term producer at the Windmill, who sacked Jean for being “immature” and “lacking personality”. He later realised he had made a mistake!

Our guest, Jo Botting, met Jean Kent in 2011 for a special screening of Jean’s 1946 romantic drama Caravan. Here’s the photographic proof of that meeting….

In 2011, not long before she died, Jean’s 90th birthday was celebrated on local TV.

In this clip from Good-Time Girl, Gwen meets Rosso for the first time – a meeting that ultimately has unfortunate consequences for Gwen.

Good-Time Girl was based on a novel by Arthur La Bern called, “Night Darkens the Streets”. La Bern also wrote, “It Always Rains on Sunday” which was adapted for the screen and “Goodbye Piccadilly, Farewell Leicester Square” upon which, Alfred Hitchcock’s “Frenzy” was based. Night Darkens the Streets is now out of print and the cheapest available copy online was £47 when last checked, so here’s a picture of the cover for free.

Although not always in perfect quality, there are several Jean Kent films available on the Interent Archive including The Browning Version and Caravan. Find more HERE

Have a look at some of the locations in Good-Time Girl, courtesy of our friends at Reelstreets.

Since publishing the episode, Caroline Champion got in touch pointing out that Jean was in an episode of Steptoe & Son in 1970. She plays Daphne who finds herself at the centre of an unlikely love triangle. Thanks to the wonder of the internet, the whole episode is HERE.