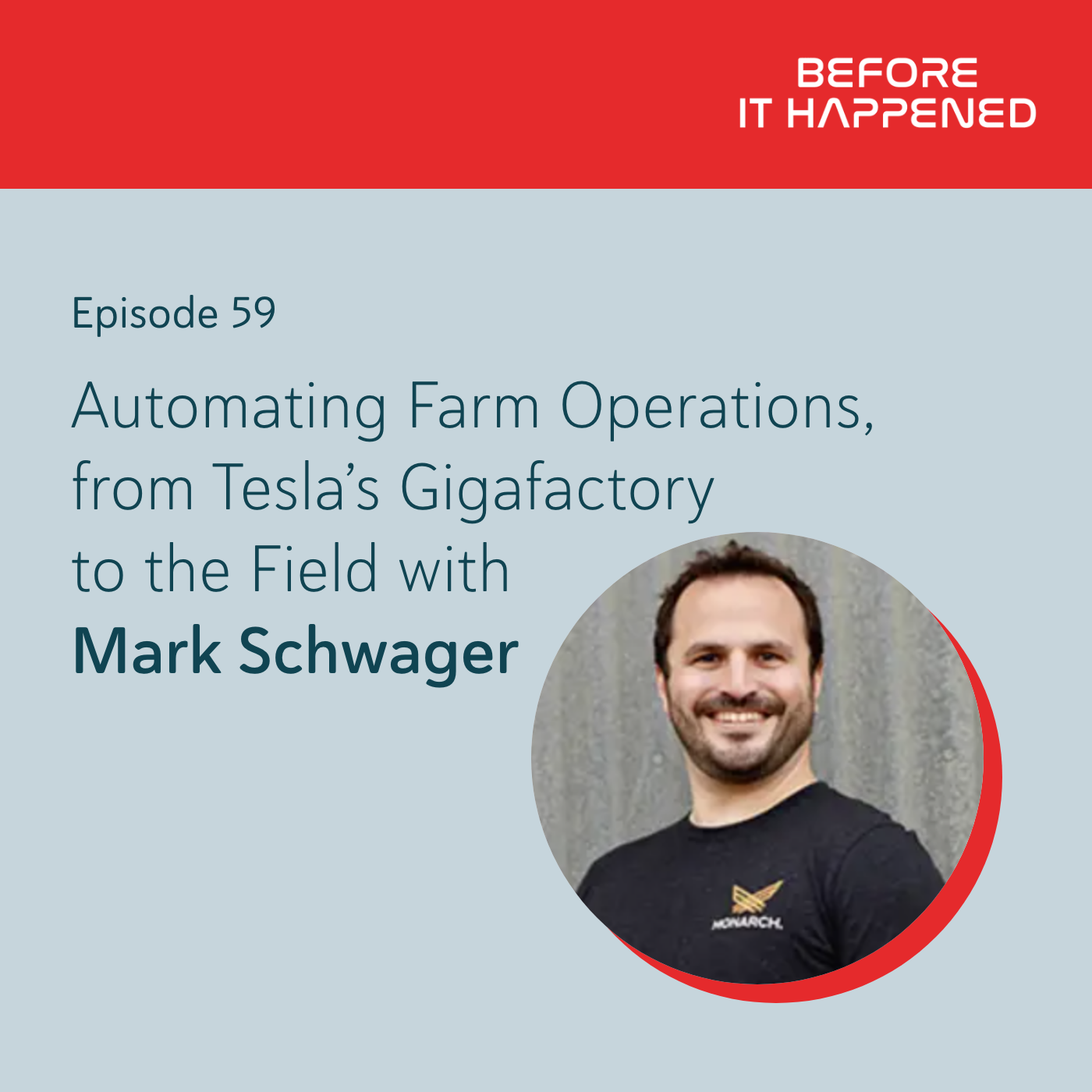 Carbon-heavy agriculture is responsible for 11% of greenhouse gases worldwide. That’s where Mark Schwager and his team at Monarch Tractor roll in, with the world’s first electric, autonomous smart tractor. Monarch sees its tractor as the future of sustainable agriculture, allowing growers to apply precision farming while cutting their diesel costs to virtually zero. Co-Founder and President of Monarch Tractor, Mark Schawager talks with host Donna Loughlin about the need for more automation and EV in agriculture in this week’s episode. Schwager has an impressive engineering and factory line pedigree. He previously served as head of the Tesla Gigafactory, leading the project from concept to construction. Now he’s applying his deep engineering and production background to the farm. Join us as we explore the future of cleaner and more efficient farming!

(03:27) - From performing arts to business and technology - “I think life is an evolution, and I think that was my passion at that time and by the time I started learning things like high school calculus and physics, I kind of started gravitating more towards it, even though I went to a special high school for performing arts.”

(05:25) - Mark’s calling to the EV sector - “While I was here on the West Coast, I was staying with a friend’s parents and they handed me a newspaper clipping about a tiny little company trying to make electric cars called Tesla, and I was like, ‘Okay, that's for me.’”

(09:42) - Building Tesla’s Gigafactory - “So basically, Elon said let's ramp it up as fast as possible, and so all of the areas of the supply chain were basically able to accommodate a doubling of production, but not battery cells. And so that essentially was the inception of getting cell manufacturing under Tesla's control.”

(16:55) - Mark’s light bulb moment - “Having worked around automated processes basically for my entire career in manufacturing, looking back even further than that, I mean, factories have been getting automated since the 80s, but none of that was really there in the farming space.”

(23:10) - Mark’s philosophy at Monarch Tractor - “We don't see ourselves as an electric, autonomous tractor company. We see ourselves as folks who are automating farm operations. And from that standpoint, we’re actually very focused on the quality of the operations and our ability to serve the farmers' needs much more than the vehicle.”

(27:18) - The Foxconn and Monarch Tractor partnership - “We believe that we can drive our competitive advantage from working with Foxconn and industrializing our vehicles with them. We can't do it on our own, but the pooled resources across that factory give us the chance to do that.”

(29:00) - The continued need to scale farming up - “​​There’s going to be like 10 billion people by the middle of the century on the planet. How are we going to feed them? The only way is by making our farmland more productive.”

Connect with Mark Schwager on LinkedIn

Listen to Before IT Happened’s: Tracing our Food Supply on the Blockchain with Niamh O'Connell.