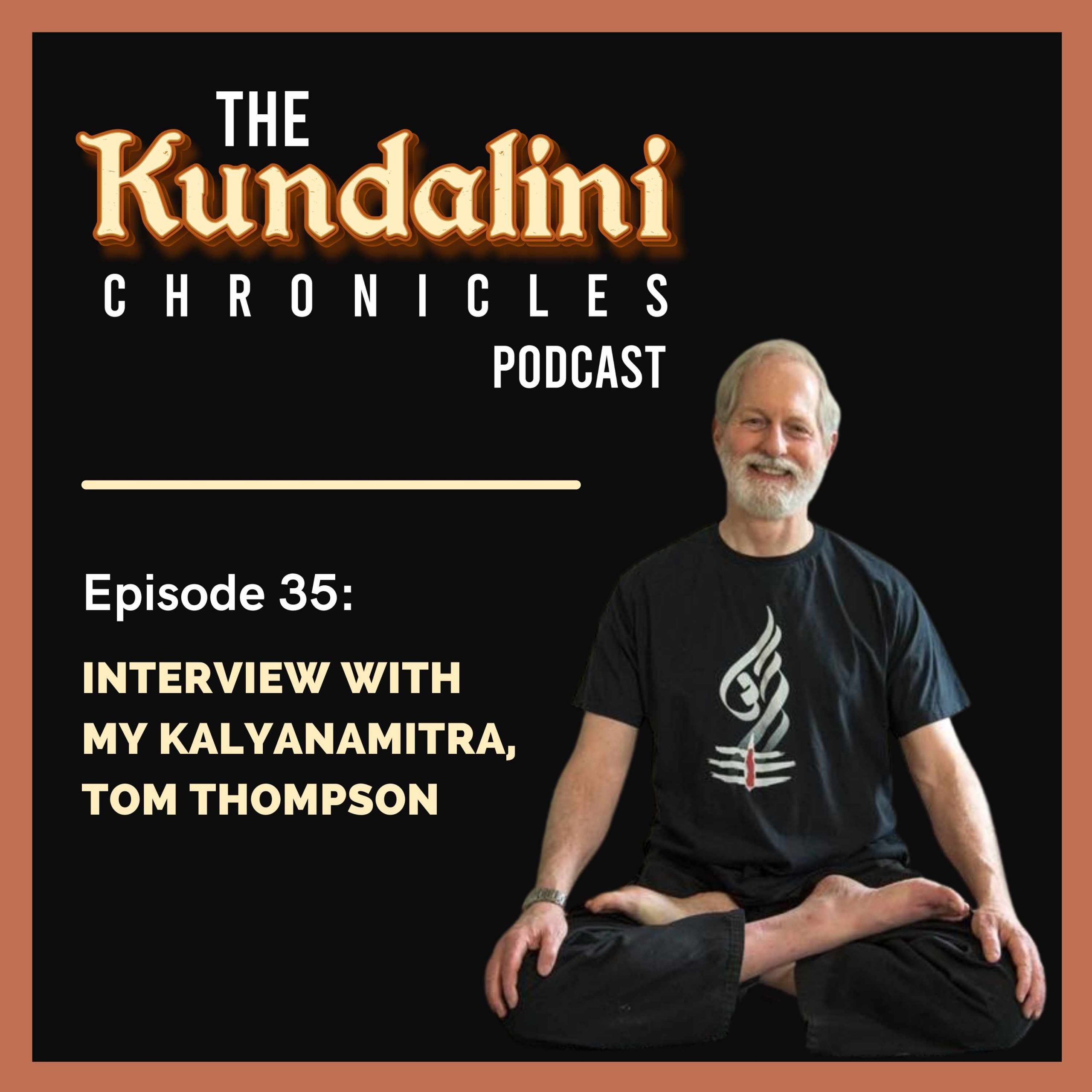 Today, I share a meaningful conversation with Tom Thompson, my spiritual teacher, or "Kalyanamitra," which means spiritual friend. Tom has bee my guide throughout my Kundalini Awakening. Tom is a teacher of Conscious Living. Conscious Living is an all-inclusive way of life that is is based on the Enlightenment Pathways of the East and the Human Potential teachings of the West. It includes the possibility of radical awakening along with the integration of body, emotions, mind, and spirit; living skillfully and effectively in this world; and being in loving, empowering relationships.

Tom has extensive training and experience in several different therapeutic modalities including hypnotherapy, transactional analysis, energy psychology, breathwork, and HeartMath®. He has been a guest on radio and TV shows. His writings have been published in newspapers, magazines, books, and his website blog. He has taught throughout the United States at ashrams, universities, hospices, spiritual centers, hospitals, and other places.

In 1982 Tom co-founded The Woodbury Yoga Center in Connecticut where he created and taught in-depth courses on Meditation, Kundalini, The Yoga of Death and Dying, The Supreme Doctrine, The Hara Training, and other subjects.

In 1990 he co-founded The Awakened Heart Center for Conscious Living in North Carolina where he continues to offer various courses and Intensives focusing on The Direct Path to Spiritual Awakening. And, in 2017 Tom began offering Satsang and Hamsa Meditation at The Yoga Garden in Pittsboro, North Carolina.

In this episode, Tom shares his Kundalini Awakening journey, how he got involved in the awareness world at the age of 15, and how he began to open himself up to spiritual possibilities at such a young age. He also talks about the virtue of meditation and awakening as part of our everyday life.

For More Information about Tom Thompson:

Tom Thompson is a teacher of Conscious Living. Conscious Living is an all inclusive way of life. It is based on the Enlightenment Pathways of the East and the Human Potential teachings of the West. It includes the possibility of radical awakening along with the integration of body, emotions, mind and spirit; living skillfully and effectively in this world; and being in loving, empowering relationships.

The teachings of Conscious Living are direct, obvious, and all-inclusive. There is nothing to be believed or accepted, as they are self-evident. They point to the incredible gift and mystery of life, living us here and now as we are.

Spiritual Teachers and Scholars Mentioned in the Podcast

Swami Vishnudevananda was sent to spread the message of Yoga and Vedanta in the West in 1957 by his Master, Swami Sivananda, with the words “People are waiting”. For 37 years he worked tirelessly as an active and dedicated spiritual teacher travelling around the world establishing city Centres and Ashrams where his work could be accomplished

Swami Sivananda’s teachings are the inspiration behind the teachings of the International Sivananda Yoga Vedanta Centers. Our founder, Swami Vishnudevananda, was one of Swami Sivananda’s close disciples, and was sent the the West by his teacher in 1957 to spread the teachings of Yoga and Vedanta. Swami Vishnudevananda, known as “Swamiji” established this organization in his Master’s name. The Sivananda Ashram Yoga Farm is a branch of the international organization.

Swami Muktananda was affectionately known by all simply as Baba. He was drawn to the spiritual path early in life after meeting the great ascetic yogi Bhagavan Nityananda. Following this encounter, he left home to wander throughout India, took initiation as a monk, and became Swami Muktananda. He studied yoga, Ayurvedic medicine, Indian martial arts, and the Vedic scriptures, and learned from many great yogis and saints.

Shri Dhyanyogi (1878-1994) was an enlightened yogi who became head of the lineage of Kundalini Maha Yoga in 1921, after forty-three years wandering across India, seeking God-realization.After nearly forty more years living in near seclusion, Dhyanyogi had the intuition to begin offering public programs where he could teach meditation and give shaktipat to all spiritual seekers. At that time in India, to receive such an initiation meant years of preparation to prove one’s worthiness. But in his compassion, Dhyanyogi experienced that the only prerequisite for this blessing was the sincere desire for spiritual evolution, and that people living ordinary lives should have the opportunity to evolve. He felt that his life mission was to share his spiritual power freely, saying, “My house is on fire. Loot what you can!”

Shri Anandi Ma is the head of the lineage of Kundalini Maha Yoga. In 1972, at age fourteen, Anandi Ma had a clear vision of the Divine Mother and experienced a merging with her. Shortly afterwards, Shri Dhyanyogi met Anandi Ma and said that he had never met anyone so spiritually advanced at such a young age.

The ninety-year-old Dhyanyogi had been hoping to find an heir to continue his spiritual work. After meeting Anandi Ma, Dhyanyogi’s guru came to him in meditation and told him she was the one. He worked with her tirelessly for years so that she would be in complete control of her prana. Dhyanyogi empowered her to perform shaktipat and to guide spiritual seekers. Since that time, Anandi Ma, with Dileepji at her side, has been offering shaktipat and teaching meditation and advanced yogic practices throughout the world.

Born in Texas in 1942, Gangaji grew up in Mississippi. After graduating from the University of Mississippi in 1964, she married and had a daughter. In 1972, she moved to San Francisco where she began exploring deeper levels of her being. She took Bodhisattva vows, practiced Zen and Vipassana meditation, helped run a Tibetan Buddhist Meditation Center, and had a career as an acupuncturist in the San Francisco Bay Area.

Despite her successes, Gangaji continued to experience a deep and persistent longing for fulfillment. She pursued many paths to change her life including relationship, motherhood, political activism, career, and spiritual practice, but even the greatest of her successes ultimately came up short. In the wake of her disillusionment, she made a final prayer for true help.

In 1990 the answer to her prayer came unexpectedly, taking her to India and to the meeting that would change everything. There, on the banks of the river Ganga, she met Sri H.W.L. Poonja, also known as Papaji, who opened the floodgates of her self-recognition. In this meeting, Gangaji’s personal story of suffering ended and the promise of a true life began to flower and unfold. Today, Gangaji travels the world speaking to seekers from all walks of life. A teacher and author, she shares her direct experience of the essential message she received from Papaji and offers it to all who want to discover a true and lasting fulfillment. Through her life and words, she powerfully articulates how it is really possible to discover the truth of who you are and be true to that discovery.

Gopi Krishna is widely recognized as having done more to advance our understanding of Kundalini than anyone else in modern times. He has put this amazing aspect of our nature in a logical, consistent and scientific light, and presented us with a new understanding of the goal of evolution, both as individuals and as a species.

Kundalini awakened in him quite forcefully in 1937 after 17 years of intense meditative practice. From that moment onwards, his consciousness was radically altered and over the next 12 years or so, it underwent an even more dramatic transformation to a perennial state.

It was Gopi Krishna’s belief that knowledge of Kundalini is essential for the survival of the race, and that with this knowledge we would then begin to explore aspects of creation totally hidden from our view at present.

Robert H. Stucky is an author, educator, linguist, and speaker whose life experience on five continents affords him an unusually broad range of insights into the human dynamic. He holds both a degree in Art and in Theology from Yale University, studied Indian yogic philosophy and meditation intensively, living for a decade under the direct tutelage of Swami Muktananda Paramahamsa, a highly revered Hindu guru. He was also an Episcopal priest for sixteen years; and, for ten years, was a nationally certified Health Care Interpreter at the famed Johns Hopkins Hospital. He has taught a variety of subjects- including Studio Art, Ancient History, Comparative Religion, Spanish, Medical Terminology, and a variety of cross-cultural college seminars; and he has mentored numerous interpreters, medical and nursing students in the art of medical interpretation and cultural competence as essential components of successful health care delivery. A popular and dynamic speaker, he has also run spiritual workshops and retreats, and lectured on contemplative practices and Comparative Religion, both in the U.S. and abroad, including a presentation of his book Reductionism, Globalization and Faith (co-authored with Sadig A. Malki) at the European Parliament in Brussels. For his entire life he has been an ardent advocate for the importance of inter-cultural understanding and a kind of trans-cultural spirituality, promoting a deeper, more experiential grasp of the paradigms that shape our experience, and the forces that can change them.

Books Mentioned in the Podcast

This House is on Fire

If you would like to learn more about Dhyanyogi, you may enjoy reading his biography: This House is on Fire - The Life of Shri Dhyanyogi.

Many people have heard of the extraordinary phenomenon of Kundalini Awakening in which a persons body is swept by muscle spasms, indescribable sensations & sharp pains running throughout the body. He feels his body tearing within. Then suddenly he laughs & is overcome with bliss. When allowed to progress to completion, this process may culminate in deep psychological balance, inner strength, and emotional maturity. Psychiatrist Lee Sanneli, cofounder of the Kundalini Clinic in San Francisco, differentiates this from a psychotic episode. Instead, it is a psychophysiological transformation, or 'rebirth' process as natural as physical birth.

The American Sanskrit Institute offers every stage of Sanskrit Studies starting with a deep grounding in the Sanskrit Alphabet provided in our breakthrough Weekend Sanskrit Level I and/or Home Study programs. The Institute makes the study of Sanskrit simple and enjoyable.

This podcast features the lessons learned from Scott Bryant-Comstock's Kundalini Awakening. Scott shares aspects of his kundalini awakening, reads a spontaneously written poem coming straight from the universe, and provides a bit of homework to help guide you in your own self discovery for improvement.

Do you want to hear more poetry from Scott? Then listen and subscribe to The Kundalini Chronicles podcast. Enjoy each episode!