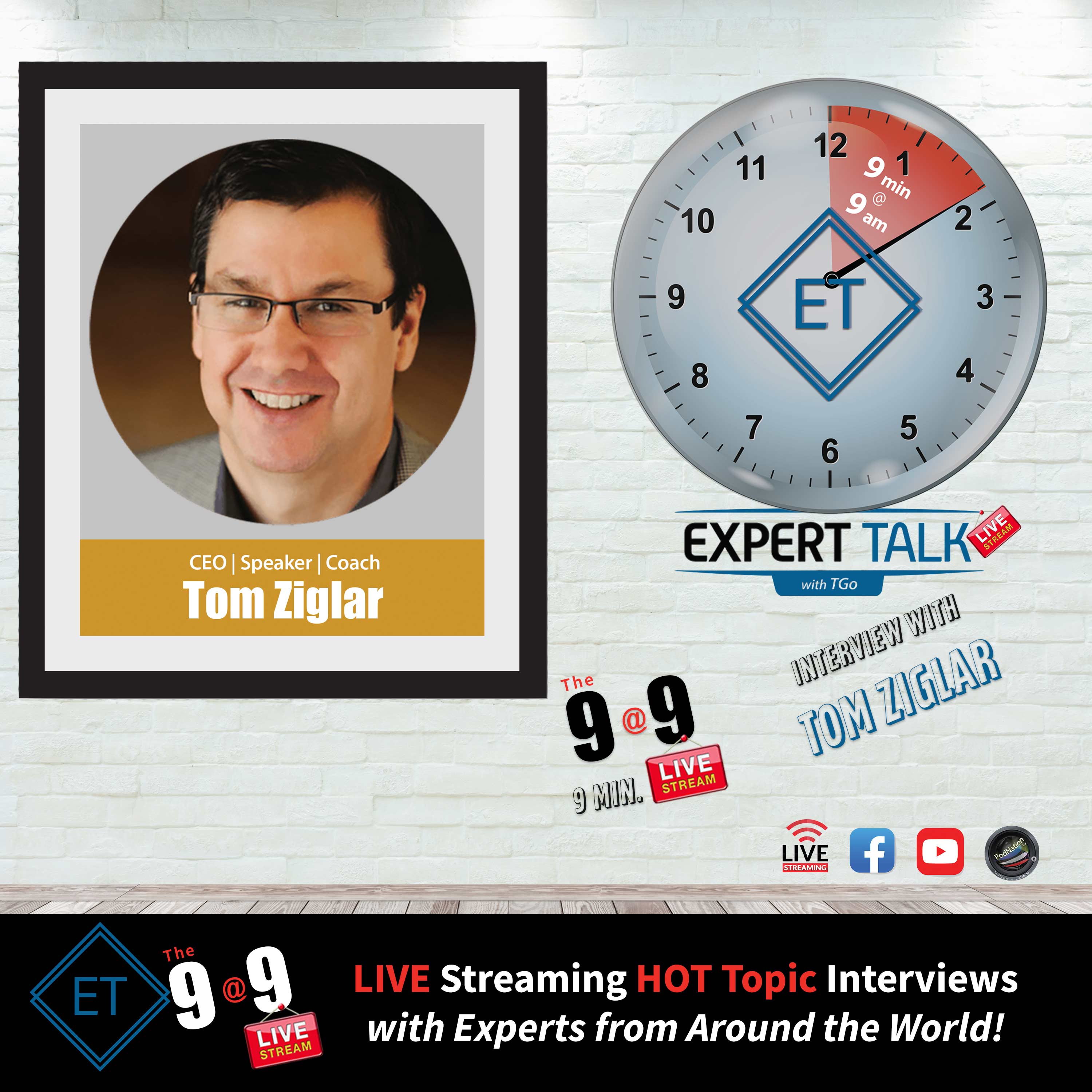 Hey, everybody, we're here to talk about something that's really passionate to me. You guys know I've been planning on starting my speaking career. I was at Secret Knock on stage. I've got other stuff coming up and I thought, who can I talk to that can give me feedback and maybe a little direction and a little insight. So I called my buddy Tom Ziglar,

and that's who's here. Hey Tom, are you here, Man? I've I hear I'm excited. You always light by fire TGo. So glad to be here. Thanks for having me. Thanks for coming on, man. And I wanted to talk with you because like I said, I, I had the opportunity to go on stage a couple of weeks ago and,

and you know, I already have the bug to be a public speaker. And I said the Ziglar program, I need to get Tom back on, do a quick live, and we can talk about how do you get started? Who actually should be a speaker and are there different kinds of speakers and who better to ask than my buddy, Tom? You bet.

Well, you know, anybody who has something to say should be a speaker. So that's a pretty big audience He said that anybody who has something to say, okay, so how do you get started? I mean, I know you're the legendary Ziglar family and, and everybody knows I'm a humungous Zig Ziglar fan. So I know how you got started, but if we weren't as blessed to be a part of your family,

How did that happen? Well, it happened because in the profession that he was in, he was in sales. He was doing a presentation type sales where you had a 45 minute presentation and he did that over and over again. And when you start getting good on your feet, you start practicing. You start to learn how to watch the response of who you're speaking to.

you can practice, you can get comfortable on your feet. You can get great feedback and you can start to watch the people in the room. Now you've mentioned a couple of times getting comfortable in your feet. And I hear all the time from people that even when I walked off the stage of a Secret Knock, somebody stopped me and said, I am terrified to be in front of the camera to stand in front of the stage.

How do you address fear when someone comes to you and says, I want to be a speaker, but I'm terrified. What do you tell them? Yeah. All at first off, that's awesome. You know, you can take an old mule and you can take a thoroughbred and which one do you want? You want the thoroughbred, right? And his legs are going and is looking all around,

but that's what wins the race. So it's okay to be nervous. It's okay to be a little bit skiddish or scared, like a thoroughbred might be, but you got to hit the gates running when you get there. And so you prepare, you, you practice, you do it in front of the mirror, you do it on camera. You do it in a,

in a friendly group, like a Toastmasters. And you get all those butterflies flying in formation. And then there's something else that we teach at Ziglar. And that is, you've got to master what we call the first burst, which is you just really get the first three to five minutes of what you're going to say down. You just get it down.

You memorize it, you practice it. You share it with people on the elevator, you share with people on the phone. And so when you get out there and you give that first, first, it kind of settles the nerves and allows you to get going. So, in other words, you're telling me to annoy the heck out of my family.

It just, You have our permission to do that. Yes. Okay. So let's fast forward a little bit. Let's talk about somebody like me. I'm 180 plus episodes into Expert Talk. I've been doing this almost two years now, done a couple of marathons. I was on the stage of Secret Knock. I've got a couple of stages coming up.

When do I know? It's time to reach out and possibly be a part of the Ziglar program. When do I know it's the right time for me? Yeah. So it's when you want to go to the next level. It's it's when you, when you're so passionate about your message that you want to deliver it in the most effective way possible, because it changes lives.

When you, when you believe that, then that's when you need to reach out and say, Hey, I need a little bit of help because you know, it's a craft. It's a profession. And Dad. I would watch him. I mean, what I became aware that he was a speaker, he was already world class, but he constantly worked on his presentation,

his delivery, the words that he used, because he knew there was always one extra person that he could reach if he just raised his game a little bit. So when you have a life-changing message, the time to reach out and go to that next level is now Awesome. Now, you know, when you reach out to an organization, an event and you say,

If you don't have Tom as your buddy, then how do you know what your package is supposed to be? What are you supposed to have in a package? Yeah. And it really depends on the circumstance. Usually they want like a one page simple bio, Hey, this is my track record. This is my resume. And then maybe two or three speaker topics that you've gone and delivered,

especially if it's a paid event. And then they might want to see a video. And we kind of discouraged sending the full hour on presentation, video a little bit better to do a key story or a highlight your, your own main point. And some people then create a highlight reel as well. And what they're really trying to decide is, you know,

who referred you? Do I trust them? Number two is, does this person have a style and a demeanor that's going to fit with our group? And number three is, do they know their stuff? And so you want to send them just enough to do that. I totally get it. Now I've got another question for you. You send your package out and you just,

But then all of a sudden you get a package or you get a phone call or letter or an email that says, Hey, we're inviting you to be on our stage for our 10,000 people. Have you ever been scared? What do you do when it's like, oh my gosh, this is bigger than anything I thought I would ever touch. Well,

the very first talk that I gave. So this is my first stage. Really. I was interviewing my Father on stage and there were 15,000 people in the room. So that'll get your heart going. Right. It was an arena. It was up in Pittsburgh. It was where the Pittsburgh penguins play. It was packed. And then I realized, Hey,

wait a second. It's actually easier to talk to 15,000 people than it is 50. Cause you can't see them. You know, the lights, the lights are blinding you and everything else. And so you've just got to put yourself in that mindset and that frame, Hey, the bigger the audience, the better, the easier it is. However, I do have to be more prepared and ready for it.

And that's really when you want to call it coach, because it's a different dynamic when you've got that big of an audience. Well, I want to thank you my buddy for coming on and just sharing a little bit. Hey, you guys, you're listening and you're wondering how to get in touch with Tom Ziglar. Guess what? TomZiglar.com. And I'm hoping he'll come back because he's got so much information about speaking...

Really Allen Really? So much information about speaking, writing, understanding who you are and being able to stand there in your own power. I learned from his Father just looked in the tapes. Now I can talk to the Tom and you guys can reach out to him, TomZiglar.com and as always TGo. And I'll talk to you next time. Really Allen really? We're going to get our buddy Tom back.