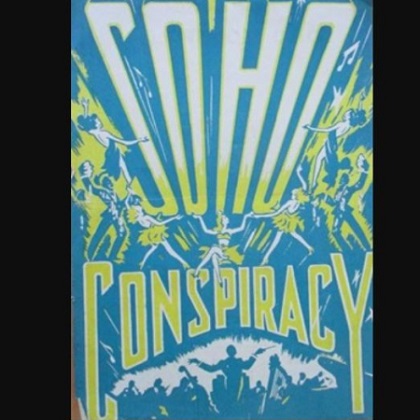 This is our Fancey episode and no, that’s not a typo. Edwin J Fancey (or EJ) was a Soho based film producer and distributor who made a fortune by churning out cheaply made films and by not always operating within those pesky confines of the law.

Fancey would have been forgotten, were it not for the efforts of Talking Pictures TV (who sometimes screen his films and even released a box set of his back catalogue) and those of Dr Adrian Smith from Sussex University who has researched and written about Fancey. He joins us in the first half of the show to talk about this forgotten Soho character.

In the second half of the show, Dom is joined, in a socially distant manner of course, by all three presenters of the Talking Pictures TV podcast – Mel Byron, Scott Phipps and Daniel Reiffersheid – to discuss one of EJ Fancey’s films, Soho Conspiracy from 1950. It concerns the efforts of some people to raise some money…. to do a thing and… to have a… another thing, but the… some Italian people get excited…. er…. people in a restaurant….I have no idea what this terrible film is about.

Not quite a trailer, more of a montage of random moments from Soho Conspiracy

During the course of researching Soho Conspiracy, we discovered it was based on an Italian film called Mad About Opera. Not only based upon it though. It turns out that large portions of Mad About Opera are lifted wholesale and inserted into Soho Conspiracy. See the original, in it entirety, HERE (with English subtitles and a Russian voice over!)

The “hilarious”, “Italian” waiters in Soho Conspiracy were played by tap dancing fraternal double-act, Syd & Max Harrison. You can watch them doing the day job that they arguably should have stuck to.

Adrian Smith has a blog and regularly reviews films on Letterboxd. If you’re still on lockdown, this might be a good time to read his PhD thesis.

The other projects of the Talking Pictures TV podcast team are many and varied:

Mel Byron is a stand up comedian and Leadership Trainer. Find information about her on her website.

Scott Phipps has, frankly, too many podcasts for one person. As well as TPTV he is part of The Reel Britannia podcast, Stinking Pause, and Rainbow Valley .

Daniel Reifferscheid currently has two podcasts – brush up your Portugese for Prestes A Ver and if movie music is your thing, check out You Know the Score.