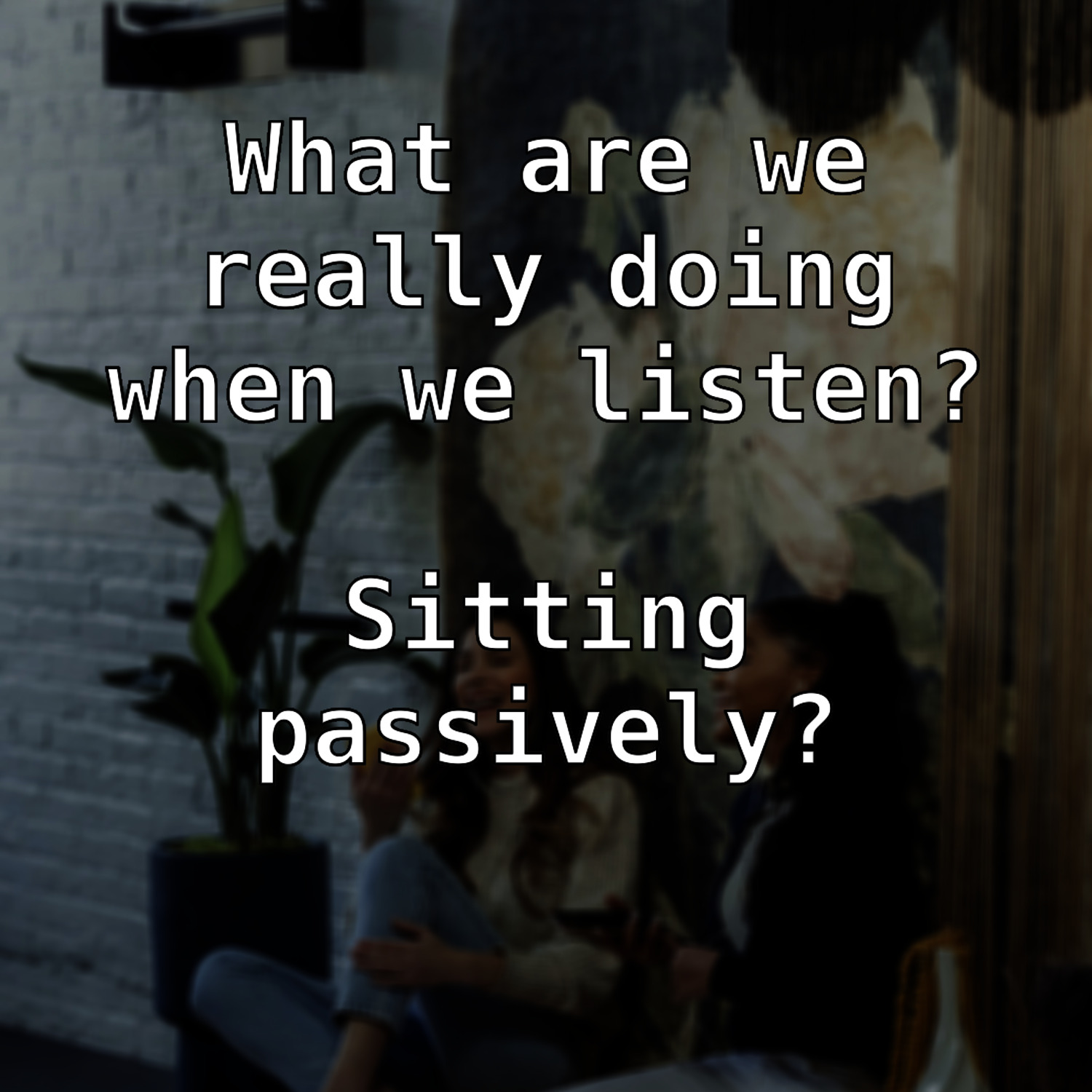 When you make space, you suspend your own ego and “make space” for the message that is being delivered through verbal and non-verbal cues. Things like making eye contact and having a receptive body language are all examples of making space.

When we reflect, we’re mirroring what someone has told us right back at them. This is the best and easiest way to make someone feel heard and understood because it gives them proof that you’ve been listening throughout. Try to keep your own insights out of the equation when reflecting and simply focus on projecting the same emotions and words that are being expressed to you.

Reacting is the most common form of listening, but it’s also the one where we should exercise the most caution. Reactions need not be comprehensive or something major. They can be subtle, like when we nod our heads along with the speaker. Like with reflecting, our reactions shouldn’t be about our own viewpoints, but rather indications that we’ve understood those of the other person.

Email the show at Podcast@NewtonMG.com or let us know what you think at http://bit.ly/pkcomment

Get the audiobook on Audible http://bit.ly/listenhearvalidateking

Making sure that communication is the best it can be takes one special ingredient: empathy. In fact, you’re probably noticing that it’s impossible to be a good communicator unless you’re also good at empathizing. Communication is never a fixed, static thing, but a living, dynamic entity that constantly changes and shifts to accommodate the people who use it. No matter how you engage with others and to what end, you will always need to master communication, and to do this, you will need enough empathy to know what “good communication” even looks like.

Empathy in communication, then, is about the ability to see into another’s world, and to speak to them as they inhabit that world.

Adjusting our communication style and our message is a little like changing what we wear day-to-day to suit the moment. When we dress, we have to bear in mind the weather, the formality of the occasion, our figure, age, gender, and personal style. But we also have to consider other people and how they might see us, and how we might want them to see us.

Communication is no different—we change according to our purposes and the audience. Bad communicators might never even consider the point of view of the person they’re talking to. Their lack of empathy keeps them trapped in their own world, and their message may not “land” because it was not sent with any consideration of where it was going. But you wouldn’t throw an unmarked letter into a post box and simply hope it went to the right place. You need to target your communication. And to extend the metaphor, we learn the emotional “address” of people we talk to by practicing empathy.

When we experience communication problems, it’s tempting to simply imagine that the other person is getting something wrong, or they aren’t listening properly. We double down and try to make ourselves heard and understood, or revert to saying the same thing over and over again in frustration. But communication is not just a skill you possess on your own—communication only happens when speaker, listener and message all come together in unity. Otherwise, no information is exchanged, and nothing changes. Consider the following example.

Beth is new to the neighborhood and trying to make friends. She joins a community group that is based around the local church, even though she herself isn’t religious. In kindness, the church group extends an invitation for her to attend a social after church one day. She goes. When she’s there, however, she doesn’t enjoy herself, and when asked, she launches into a speech about how she doesn’t agree with their beliefs, and finds the whole thing ridiculous, and won’t come back because she could never share in the delusion that these people clearly do.

Naturally, she causes enormous offense, instantly loses her new friends and isolates herself. She is angry at them: how can they judge her when she was just being honest and “true to herself”? Did they expect her to lie?

We can see what’s happened. Beth had a message to share (i.e. she didn’t enjoy the church socials and didn’t want to join) but didn’t spare a single thought for the people she was sharing that message with. She considered only her own perspective, and neglected to imagine that from her new friends’ point of view, her outburst was horribly rude and disrespectful.

If Beth had had more empathy, she could have paid more attention to the emotional content of the situation. Here were people that were different from her, but who nevertheless extended a friendly and welcoming gesture. She could have acknowledged this invitation, and politely stated that the church group wasn’t right for her, while still maintaining friendly contact so she could spend time with them in different ways. But in Beth’s mind, she told the “truth” and that was that. She didn’t care about the others’ communication styles, the context, her biases, or how her message would land. She was a bad communicator.

You’ve probably heard a similar sentiment anytime someone says, “What? I’m just calling it like it is,” as though all that mattered in communication was the factual correctness of the data shared. This is why it’s not so easy to compile a list of “things to say when you want to appear empathetic.” Good communication is all dependent on the context and the people communicating. Saying, “I’m sorry, you must be feeling awful right now” could be the perfect thing to say in one context…and incredibly tone-deaf in another. But with empathy, we can discern the difference.

What are we really doing when we listen? Sitting passively?

When we become masters at validation and genuine empathy, listening is so much more than just the empty gaps where we’re not speaking.

Active listening means putting your full, conscious attention on what another person is sharing. It’s being present with full receptivity and a generous, accepting spirit that completely centers the other person’s message and perspective. Far from being passive, empathetic listening takes conscious effort and is a skill we need to consistently practice.

When we listen, we are connecting with the message and with the other person. We are taking it in, processing it, reflecting it back. We make their expression come alive, and respect their willingness to share by responding authentically to what we hear. This alone shows that we care enough to find what they say significant.

There are a few types of empathetic listening, and each may be more suited to a particular context. The below are three different attitudes, approaches or techniques to active and empathic listening. Depending on the circumstances, each aspect can be dialed up or down.

The first step, as we’ve seen, is to listen. Open up. Be present and let the other person be as they are, and say what they need to. “Making space” is about removing your own ego from the picture, and letting the message that is being shared take its full shape without interruption, interpretation or judgment.

You can make space nonverbally, for example with open body language and a receptive facial expression. You can use silence and genuine attentiveness to invite the other person to share. It’s a wonderful gift to give to another—the space to simply be who they are, and feel what they feel. When we make space, we’re not silently thinking about what we’re going to say next, or making a big show of our own reactions. We don’t rush the other person, or jump in with a response, even if that response is encouragement. We simply allow.

Pay close attention to every word they say. Forget about what you think for the moment, and imagine that you have nothing to do at all but to listen to what is unfolding in the moment. Set aside judgments and distractions. Sounds easy, but it can be hard!

We can be like mirrors to the people talking to us. We can receive their message and send it back to them, which is extremely validating. It’s as though we’re saying, “Aha, message received loud and clear. Is this it? Have I understood?” A good mirror reflects things as accurately as possible—a good mirror is invisible, and is filled only with the thing it’s reflecting.

So, when you reflect, keep your own interpretations out of the picture as much as possible. Paraphrase what you hear. In our six-step validation process, we spoke about how to put feeling words onto the message, and this can be done here, but often you’ll find that it’s more effective to simply use the language that is already on the table, especially if empathic listening is your main goal.

It can be particularly validating to have your emotions reflected back at you, rather than just facts. Be a sounding board and give a faithful echo, without letting that echo dominate. Your reflection should support and encourage, rather than derail or change the topic.

The third (and arguably most active) type of listening is where we respond to what we hear with empathy and compassion. Nobody wants to talk to a brick wall or feel as though their message has fallen on indifferent ears. It can be validating to see that others feel what we are saying, and react to it.

But here, we need to practice caution. Our responses need to be wanted and appropriate. If someone confesses a secret to us, it would be disastrous to immediately respond with disgust or shock. On the other hand, if someone is telling a sad story, it can be validating if the person listening shows they understand and are also moved by the story.

Reactions don’t need to be big to be effective. We can show that a story has affected us simply by a change in facial expression, nodding at key points, or adding an “uh-huh” or “I see” when appropriate. We can also show a subtle reaction by mirroring the other person’s tone of voice, posture or facial expression. We tell them not only that we are listening and understand the emotional impact, but that we agree, and that we’re right alongside them in their reaction.

When we react effectively, it’s less about our own judgment of what we’ve heard, and more a genuine recognition of the emotional content of the story. It’s always a good idea to be honest in conversations, but we can also temper this with what the other person needs from our listening. If someone shares their grief with you after losing a loved one, it would be perfectly acceptable to say, “I can’t imagine what you’re feeling right now” if that’s genuinely true. On the other hand, if you are genuinely moved by the topic and saddened on their behalf, it can be reassuring if you show some sadness yourself. In listening to others, we need to ask whether our reactions will support empathy or hamper it.

Making space, reflecting or reacting. Each has its place. You may find that all of these approaches are useful as you listen; you could start by making space and simply allowing people to speak, but gradually move on to more reflection and eventually display your own reaction.