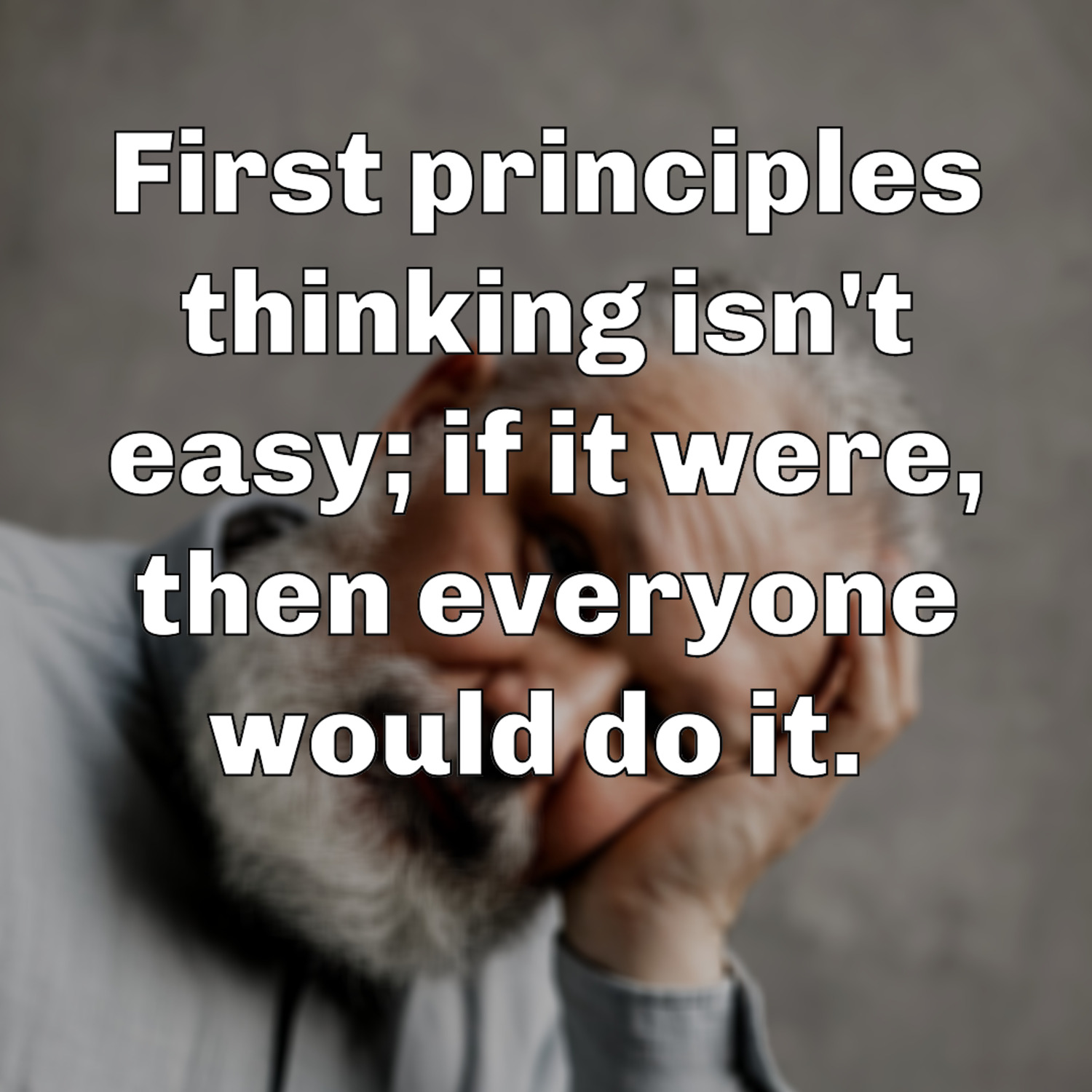 * Mental Model #18: Get Back to First Principles. When we try to solve problems, oftentimes we attempt to follow methods or a specific path just because they are the conventional means. But are they the best? First principles thinking strips away assumptions and leaves you with only a set of facts and a desired outcome. From there, you can forge your own solution.

Finally, famed South African entrepreneur Elon Musk asks the simple question to help us solve problems: how can we be sure that we aren't attempting to solve a problem based on imperfect or incomplete information?

Welcome to the mental model of first principles thinking, which is stripping everything about a problem away until you only have the basic components - because only then are you free to really address the problem itself.

Much of the thinking and analysis we do rests on the backs of other people's accomplishments, discoveries, and assumptions. We'll see how someone else does something - builds a bicycle, makes a cake, writes a song, opens a small business - and, more or less, copy what they did and just add a few things to improve it. We don't think much about them, and we follow suit for various reasons, one of which is "it's just the way it's always been done." Why do we need to reinvent the wheel?

It may not be innovative or original, but following a proven guideline works. Or does it?

This is known as analogy reasoning, and it works, but it is prone to errors and mistakes because you follow a path like gospel while underlying assumptions aren't questioned. Imagine if you were told that a cake has a certain amount of flour and eggs, and you simply emulated the recipe without questioning as if it were true. This recipe may have been handed down for generations, but perhaps it was simply codified because one grandmother down the line only had so much flour and eggs available to make the cake. Perhaps this actually creates a rather gross-tasting cake, and if you deviated, you would improve the flavor and moistness tenfold.

The point is that what we think we know about a problem or scenario is often based on a set of assumptions. Assumptions aren't always correct. We assume that flour and eggs in a specific ratio create the best-tasting cake, but is it true? You just might be the blind following the blind. (Sorry to all the grandmothers.)

This method strips away the opinions and interpretations of other people and gets you to the essential elements that exist. From there, you can then build back up to a solution, often with an entirely new approach based on truths that are unimpeachable and indisputable - because you are not resting on any assumptions anymore.

Thus, breaking grandma's cake down to first principles would be to first examine what is actually needed to bake a cake and in what proportions. Only then could you start to recreate the cake to be tastier, and you might find that different proportions and ingredients are needed. It sounds like an easy solution, but sometimes it just doesn't occur to us that not everything is set in stone.

Musk espouses first principle thinking in everything he does and fervently denies being told "that is impossible." Sure, it might be impossible according to the assumptions currently in place, but not his.

When Musk sought to create SpaceX, a privatized space company, he quickly ran into the reason that all other privatized similar efforts had failed: the massive cost of rockets. Being that the business of SpaceX would be sending rockets into space, this was quite a roadblock.

But his price estimates rested on the assumption that he would have to buy rockets from other companies. He applied first principles thinking and broke down the real costs of getting into outer space through any means, and he quickly found that the price tag of the rocket wasn't what it seemed.

Instead of buying a finished rocket for up to $65 million USD, Musk decided to insource the process, purchase the raw materials, and build the rockets himself. Within a few years, SpaceX had cut the price of launching a rocket to a fraction - by some reports 10% of his earlier estimates.

Musk used first principles thinking to break the situation down to the fundamentals and simply asked what was needed to get into outer space. A rocket - that answer didn't change. But the rocket didn't have to come from Boeing or Lockheed or any of the other established aerospace manufacturing companies. By starting from his goal and then identifying the inherent assumptions he wanted to break free of, he was able to create a more efficient solution. You start by asking, "What are we 100% sure is true and proven? Okay, let's disregard everything besides that."

He used his mental model once again when he wanted to solve the problem of fast and efficient transportation between Los Angeles and San Francisco.

The current assumptions around such a solution are numerous. The obvious frontrunner would be a high-speed rail system similar to Korea and Japan's subway systems. However, it's an assumption that his new method of transportation would need to resemble any existing systems. What about reinventing the wheel?

The fundamentals of his problem were that he wanted a safer, faster, and cheaper method - it could conform to existing transportation systems, but it didn't need to. With those requirements, what kind of new system could be created? That's when the Hyperloop was born, and if you've seen pictures of it, it resembles an underground roller coaster more than a rail system. But that doesn't matter if the problem is solved, does it?

To find first principles, Musk goes through a short three-step process to blow past assumptions. For our purposes, let's suppose our problem is to recreate grandma's cake with a lack of the ingredients in the recipe.

1. Identify and define current assumptions. These are things that appear to be givens or unable to change. Grandma's cake requires a certain mixture of flour and eggs. Or does it?

2. Break down the problem into its first principles. Something edible resembling a cake must be presented. A cake typically requires X number of eggs and Y grams of flour. It needs heat and a container.

3. Create new solutions from scratch. Grandma's cake is unable to be created with the current ingredients we have, but we can find adequate substitutes for everything missing. What substitutions can be made in the recipe? Does it even have to be flour or eggs at all?

You can use this model of thought for just about anything - building a business, learning history or the arts, even analyzing an emotional or personal issue. For example, your problem is that you don't seem to have enough time in your schedule to exercise sufficiently to lose weight.

Assumptions: Weight loss depends on exercise, you don't have enough time, you need to lose that much weight, your schedule is too busy.

First principles: Weight loss depends mostly on diet, you can make time if you stop watching so much television, your schedule still allows a few 20-minute breaks throughout the day, and you don't actually need to lose that much weight.

New method: A combination of short, quick workouts and eating healthier by preparing all of your week's meals on Sunday.