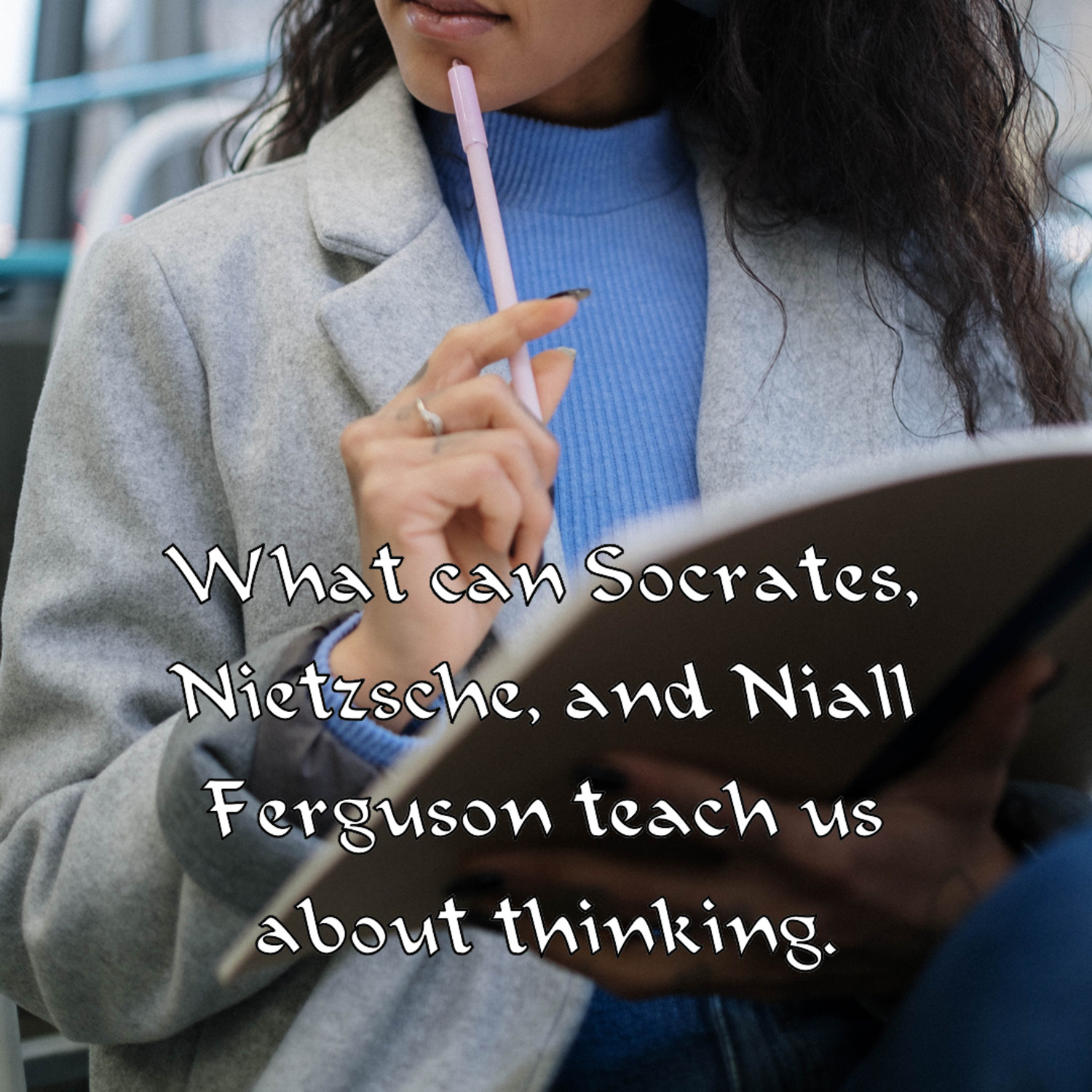 Many famous independent thinkers throughout history shed light on how we might develop the capacity in ourselves. Socrates teaches us the power of asking questions and uncovering our assumptions by taking nothing for granted. Niall Ferguson teaches us about counterfactual thinking, and imagining answers to the question “what if?”, and Nietzsche teaches us the value of perspective-switching to enrich our perception of the world.

At this point, let’s clarify a few characteristics of the independent thinker:

• They can gain awareness of their own thinking as thinking, and take conscious control over it rather than passively and unconsciously going along with others.

• They trust their own perceptions, will, desires and interpretations and do not automatically privilege other people's over their own.

• They are comfortable going outside their comfort zone, and don’t mind admitting errors or being disliked for their positions.

• They take in enormous amounts of information but actively engage with it, not just on a superficial level but also critically.

• They know their cognitive biases, expectations, blind spots, and the ever-present ego and try to minimize any disturbance to their genuine understanding.

A conventional thinker occupies a mental model unconsciously, and the model they use may be something of someone else’s creation. An independent thinker knows many mental models, and owns their responsibility to choose which one to occupy, and for what reasons.

This section will look at a few key historical figures who are broadly considered to embody the above characteristics. These thinkers and theorists have demonstrated thoughts and opinions so genuinely novel and independent, that they always have changed the course of history or else drastically broadened the existing paradigm. But in reading about these people, we are not trying to answer the question, “how can I be more like them?” That is simply level 1 thinking! Instead, we want to see what we can learn from their experience, and understand what it says about our own.

You may wonder if independent thinkers are always philosophers and scientists. Independent thinking can manifest as the scientific method, but this is not all it is. Seeking evidence, establishing the truth through experiment and falsifiability, and using reason and logic are all used in the sciences, but they are more rightly a part of a broader approach to reality. You need not be a scientist to be an independent thinker! As long as you are questing for deeper understanding and will consider your role in the equation, so to speak, then you are a critical and independent thinker.

The people we’ll discuss below all liberally used analytical, logical, conscious, and reflexive mental models. These models gave them a richer and more lively perspective on reality than people who merely swallowed convention without a second thought. You could argue that independent thinking should just be called… thinking. Everything else is a knee-jerk reaction, habit, ego, coping mechanism or piece of culture.

Let’s see what we can learn from the independent thinking heavyweights.

Socrates – teaches us about challenging assumptions

Socrates was basically a one-trick pony. That trick? Asking questions. That’s it. Socrates wanted to understand. He wanted to dig dep, and when he thought he found an answer, he questioned that. He knew that correctly honed mental faculties were humanity’s saving grace, and he took it as his mission to use dialogue, logic and reason to uncover the truth.

Besides Socrates’ philosophy, he was known for what’s now called Socratic dialogue. Reality is revealed to us when we engage with our ignorance. In curiosity, we ask questions, and keep on asking them. We question even our questions, and our means of interpreting the answers. We start from the bare bones, assume nothing, and take small logical steps to discover what we absolutely can know. Socrates would demonstrate this dialectic to uncover hidden assumptions in a literal conversation. Step by step, the Truth is revealed.

In classical Socratic dialogues, two people discuss higher concepts like virtue, the nature of knowledge, and art. But we can use a similar approach to uncover assumptions in our everyday lives. We can ask questions such as:

“What do I mean by XYZ?” (what assumptions have I made about definitions?)

“What is my evidence for thinking this?” (do I have any reason to believe it?)

“What do I know here?” (and what am I simply guessing?)

“What am I (or you) not seeing?” (I may have made an error by omission)

Getting a handle on your own assumptions means being willing to think from scratch. Consider even what you think is obvious and ask, is it really that obvious? Is it a given? You might ask yourself a series of the above questions five times in a row to get to the root of your deepest held assumptions. This process might not illuminate the truth, but it will show you more clearly any impediments to seeing that truth!

“Well, I’ve got this weird lump, and I know what that means… cancer!”

Does a lump always mean you have cancer?

Is what you read absolute proof that you have cancer right now?

What is the evidence?

So, what do you really know?

“Uh. I guess the only thing I really know is that I have a lump.”

Niall Ferguson – teaches us the power of counterfactual thinking

Famously a historian who wrote about alternative history (specifically, what life would have been like if Germany had won World War II), author Niall Ferguson was a master of using the all-powerful phrase, what if? Counterfactual thinking is an out-the-box approach that is intrinsically innovative and creative. Every independent thinker must be familiar with the process of seeing what is… and being curious about what isn’t.

For example, in business, you could use counterfactual thinking to look at past failures and imagine how things could have played out differently, thus devising an improved strategy that prevents those mistakes in future. If you’ve asked a question and gotten a puzzling answer, it’s counterfactual thinking that helps you imagine what the right question would look like.

This thinking style is a little strange and unfamiliar to those used to working only with what’s right in front of them. Still, for those natural inventors and creatives of the world, thinking about what could be is as important as thinking about what is. When you ask what if, you step out of your comfort zone, drop all assumptions and pet theories, and take a leap into the possible, potential, and theoretical. This is where novel solutions are found, new ideas are explored, and fresh views are taken on old situations. In a way, Socrates was also a counterfactual thinker in the sense that he repeatedly asked, “what if everything I think I know is actually wrong? What then?”

Friedrich Nietzsche – teaches us about perspective

Nietzsche was a philosopher who knew how much ego stood in the way of understanding, and he made liberal use of teasing, criticism and humor to poke holes in the prevailing yet unexamined ideologies of the time. Rather than being a nihilist, Nietzsche was instead keenly aware of the fact that every person inhabits a particularly conditioned perspective, informed by where they’re born, when, how they’re educated, who their parents are and what their culture teaches them.

Unaware of their impact, we are slaves to these influences. But if we become aware of our circumstances, we give ourselves choice. We master ourselves and the world at large, and become the creators of our experience rather than at its mercy. Nietzsche believed that one way to get outside of these perspectives was to liberally try on as many as possible, and genuinely see the world through other people’s lenses.

Nietzsche said, “There is only a perspective seeing, only a perspective "knowing"; and the more affects we allow to speak about one thing, the more eyes, different eyes, we can use to observe one thing, the more complete will our "concept" of this thing, our "objectivity," be.” Thus, all there is in the world for us as human beings are different subjective perspectives of that world. But if we can appreciate as many perspectives as possible, we gain a richer and more intelligent view of that world. For Nietzsche, there are no facts, only interpretations, and every person adopts their worldview and mental models to serve their needs. Our egoism is merely a narrowing of perspective; to free ourselves as much as possible, we need to widen that perspective and mix it up.

One great way to do this: find a point of view that is diametrically opposed to your own, and pretend it is your own. Make arguments for it. Imagine that, in its way, it makes complete and perfect sense. Genuinely engage with people who disagree with you – imagine that in doing so, you are accessing another aspect of the issue that you were previously blind to. Your world becomes bigger.