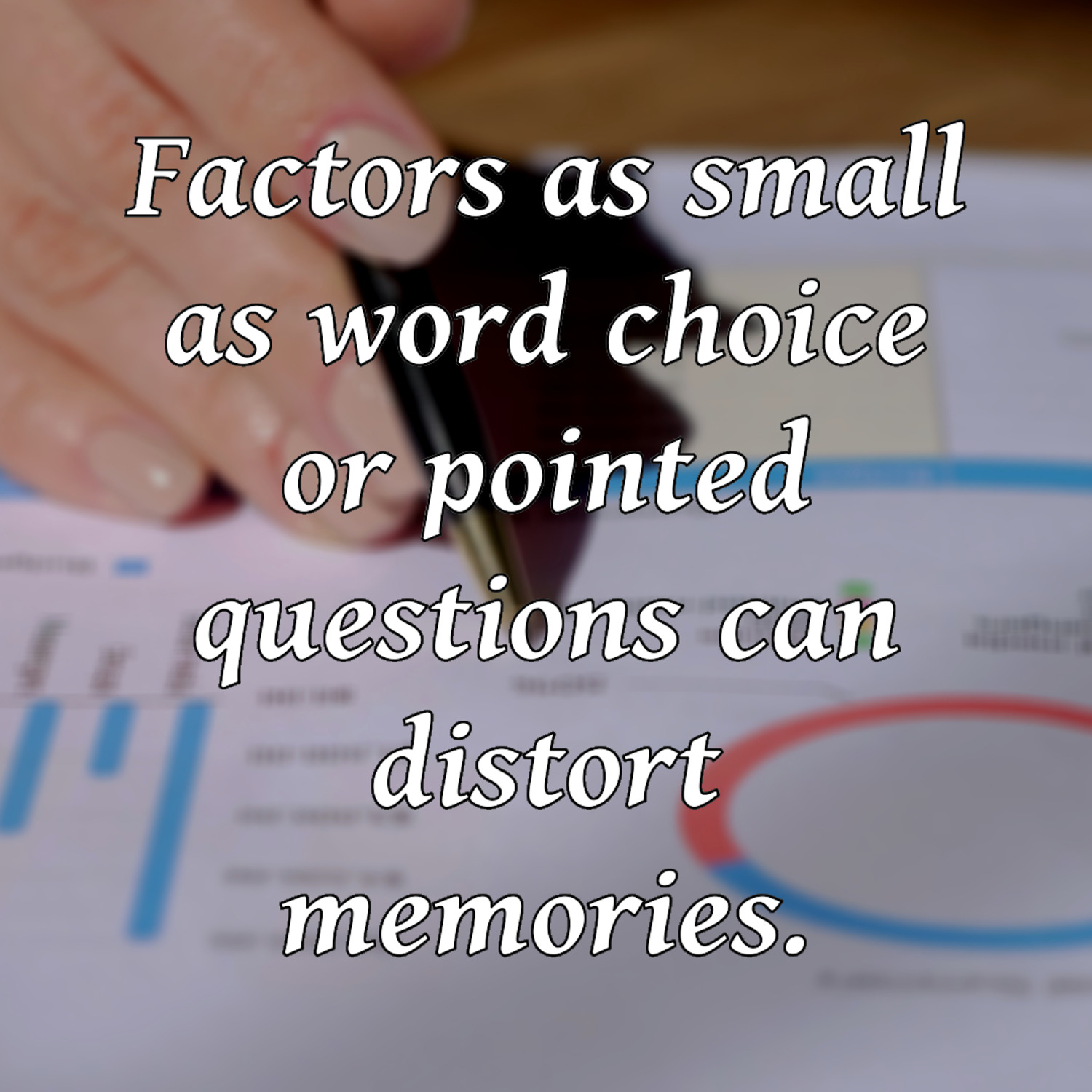 Your perception is biased. Understanding the world around you is probably biased because of how the brain jumps to conclusions. These types of jumps are called cognitive biases. They seek to create a story out of as little information as possible, to avoid uncertainty. Battling cognitive biases involves telling stories in reverse, slowing down, and shifting your focus to questions instead of declaratory statements.

Your memories are wrong. No matter how real and accurate they sometimes feel, a disturbing fact is that memories and false memories end up being indistinguishable to your brain. Factors as small as word choice or pointed questions can distort memories. Unfortunately, we depend on these memories to form our world views and perspectives.

So how do we work to improve our perception and avoid being led astray by our shortcutting brain?

Of course, you can start immediately trying to be aware of them in your thinking and note how your perception is likely focused on speed rather than accuracy. But still, that feels inadequate against some of these thought patterns that have been left unchecked our entire lives. A few specific mental exercises can help retrain your thinking to be clear-minded and measured.

Practice thinking of alternative explanations. Instead of making a snap decision, alter your focus to accuracy and not speed. Take your time. Stop feeling anxious just because there is uncertainty or the lack of a clear decision. Don’t write the story immediately.

Try to think of multiple reasons or causes. Reserve your judgment and stop jumping to conclusions. For example, if you’re sitting in your favorite coffee shop and you notice a huge drop-off in business, you might think it’s because the quality of the coffee has declined. But it could also be because more people are making their own espresso drinks, or because it’s summer and more people are doing other things outside. Or perhaps the prices the store is charging are keeping people away.

You might try an exercise of taking a scene, a person, or any other thing, and observing five details or characteristics about it. Then, for each of those details, write down five possible causes that may have led that particular detail to be the way it is. Try to vary the potential causes you list, ranging from the realistic to the downright bizarre. This will train your ability to create a story around every detail, thus giving you twenty-five trains of thought instead of the quickest and easiest for your brain to process.

Most of us think only linearly in terms of cause and effect. But that’s ineffective at best to understanding a situation.

Reword your statements as questions. Think of something you consider a declarative, absolute truth. For example: “E-books and e-readers are killing literature.” That’s a pretty strong statement. But try rephrasing it: “Are e-books and e-readers really killing literature?” The mere act of turning it into a question makes your brain start looking for answers. Instead of a conclusion, you’ve opened up a line of inquiry.

“Well, maybe e-readers are bringing more people to reading—that’s good.” “They may be changing how we read, but they’re not really killing how literature is made. Maybe I’m just overly sentimental about physical books.” With just that one change to your statement, you’ve opened up your mind to a new line of inquiry and exploration.

Get behind and challenge your assumptions. Let’s say you have a very broad belief about poor people: “They’re poor because they don’t want to work.” Challenge that assumption immediately: “Do poor people just not want to work? Or do they have fewer opportunities? They’ve been closing plants and stores in town for a few years now—maybe they don’t have anywhere else to go. And it’s hard to get the proper training for a skilled position when you can’t afford it... What if there is something else that causes it? What if there are about fifty shades of grey to this matter?” Am I saying something that fundamentally depends on an untested assumption?

The harsh truth is that whatever you think you know about a topic, especially if it involves people’s thoughts and motivations, you probably know only about ten percent of what’s truly happening.

It’s always best to be proactive about challenging your assumptions through self-interrogation, especially through valid news and information sources, including people who really have deep experience in the subject you’re thinking of. It’s uncertain where many of our assumptions come from, so it’s good to reevaluate them from time to time.

Remove your need to be right. The truth is a separate pursuit entirely from this, and sometimes there is a stark contrast because you want to feel a certain way about yourself, especially in front of others. Truth becomes a lot easier to discern when you take your emotional rewards (and punishments) out of the equation and simply try to determine what’s real.

If you face opposition, it’s just going to cause you to dig your heels in and deny, defend, and stonewall. You’ll be seduced into caring more about dominating someone than understanding. You’ll want to avoid that sour feeling of shame when conceding defeat to someone—anyone. Even if you’re right, very few people make friends by saying, “I told you so.”

Picture how a desperately stubborn person would act—is that similar to how you act? Could anyone make an honest comparison between the two? Hopefully not.

Even more so, explore being wrong and understand the evoked feelings. Play out scenarios where you are indeed wrong. What feelings will you feel? There may be embarrassment, anger, humiliation, or shame—but do they affect the world or your life? Only if you let them. Perception is only biased if you allow it to remain unchallenged.

More frequently than we would like to admit, we are flat-out wrong about what we think happened in the past. Our memories fail us constantly, but we’d never know because they also rewrite themselves.

Just because our memories are capable of remarkable feats doesn’t mean that they aren’t subject to just as remarkable errors. A false memory is simply a real memory, which is neurologically identical to a real one, but not based on something that actually happened.

Over the five days, the subject began to recall more and more about the false memory, introducing details that were never there, which seemed to stem completely from the subject’s imagination. He purported to remember everyone present and even the emotions involved. He was adding onto the false memory, not realizing it was made up.

Weeks later, the subject was asked to rate his memories for how clear they were. He gave a false memory the second highest rating out of the four memories presented. He could provide vivid detail—perhaps because it was fabricated, so the details conformed to his idea of what the experience would usually entail. Memories could be implanted in people just by saying that they had occurred.

Subjects watched different videos of car accidents at three different speeds. After, they filled out a survey asking, “About how fast were the cars going when they smashed into each other?”

Other groups of subjects watched the same videos and filled out a survey after as well, but the survey instead asked, “About how fast were the cars going when they bumped/hit/contacted each other?” The subjects' estimates changed in relation to the verb used, which influenced the perception of speed and impact.

This simple change in vocabulary affected people’s perception of an event, and in essence, changed their memory surrounding it. How reliable can memory truly be when such small variables manipulate us? This was an event that the subjects watched on video—and the speed increased by nearly 10 mph when leading language was used, a discrepancy of 25%.

The ease with which false memories are created is why eyewitness testimony occupies such an ambivalent place in the legal system. Memories can change during interrogation, and sometimes, intentionally. For example, Annelies Vredeveldt of the University of Amsterdam states that asking questions about a memory can easily take a wrong turn if you ask questions as simple as, “What was the color of his hair?” or “He was a redhead, wasn’t he?” The first question assumes that there was a male, and the second question is leading and draws its own conclusions.

Eyewitness accounts are highly trusted by juries, yet highly condemned by judges and attorneys who know better. Researcher Julia Shaw states that to implant a false memory, “you try to get someone to confuse their imagination with their memory and get them to repeatedly picture it happening.”

This means repeating a false memory or story to someone can cause them to confuse the false memory with reality, and eventually mesh them with the real account. There is a very thin and blurry line between memory and imagination.

Christopher French of the University of London sums it up best: “There is currently no way to distinguish, in the absence of independent evidence, whether a particular memory is true or false. Even memories which are detailed and vivid and held with 100 percent conviction can be completely false.”

Our memories are incredible, but the same malleability that leads to memory feats can also be exploited to show great flaws. The same sponge-like qualities can lead to wrong information and skewed perspectives. These create flawed thinking, not out of unsound logic or perception, but if you remember something to be different from reality, you’re going to have some trouble. The main goal of our brains isn’t to be accurate or even helpful, and thus, it can be easily manipulated and tricked.