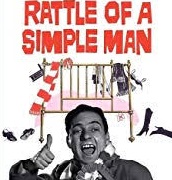 Episode 5: Rattle of a Simple Man (1963) and the Soho Cricket Collective.

The Collective has been running as a team for over a decade and is made up of keen amateur cricketers drawn mostly from the film and media companies that have their homes here. A love of the game is pretty much the only requirement to bag a place on Soho’s only cricket team. If you’re itching to play, as long as you know which end of the bat to hold and are an all round good egg, you might be in with a chance!

The team picture from April 2018

Later, we hear Dom speak to Dr. Melanie Williams at the Soho A Go Go Film Festival in October with host Aidan McManus about ‘Rattle of a Simple Man’.

Directed by Muriel Box, the film is a 1964 British comedy-drama starring Diane Cilento, Harry H. Corbett and Michael Medwin. It’s based on the 1963 play by Charles Dyer (who also appears in the film) and is about a naive young football fan, down in London from Manchester for the FA cup final, who meets a sophisticated working-girl in a Soho night-club and has a night that will change his life.

Live on stage at the Regent St Cinema, Dom talks to Aidan McManus and Melanie Williams about Rattle of a Simple Man

Episode 5 is founder, Jingan Young’s last episode with Soho Bites as she wears many hats! You can still follow her Soho on film research here, and her new project Cities in Cinema.