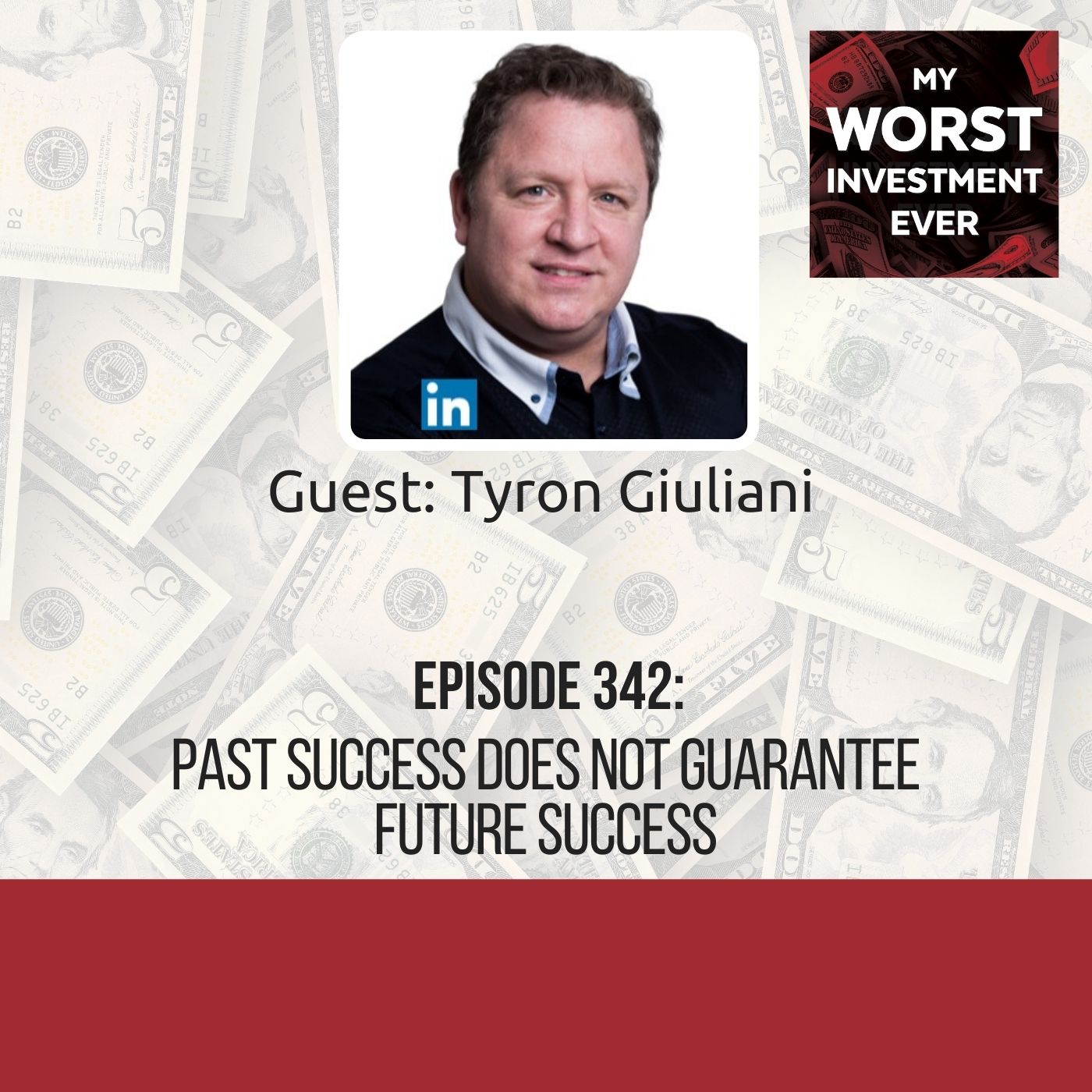 BIO: Tyron Giuliani is an Australian entrepreneur who moved to Tokyo on a whim, where he went on to work with 67 Fortune 500 companies to build their management teams in Asia. He hosted Vice President Al Gore in Japan after winning his Nobel Peace Prize.

STORY: Tyron got introduced to two celebrity business moguls by his big shot CFO friend. The two were starting a new company and asked Tyron to invest. He said yes without understanding what he was getting himself into. The two partners did not see eye to eye businesswise, leading to the company’s death before it even got off the ground. Tyron lost $300,000 in the process.

LEARNING: Don’t let ego mislead you into getting into a bad investment. Do not be blinded by the upside and let an expert do your due diligence for you before you invest.

“Unless you truly know what you’re doing, have another person’s eyes look at your deals.”

Tyron Giuliani is an Australian entrepreneur, but after being injured and suffering a permanent disability while in the Australian Army, he left Australia on a whim and moved to Tokyo, Japan.

He had one suitcase, no friends, no family, and no Japanese language skills whatsoever.

Fast forward 22 years and he is still there, speaks Japanese like a 3-year-old, but has co-founded, founded, and partnered in three 7-to-8 figure businesses.

He started his first business servicing weddings as an ordained minister, and that business provides wedding dresses to over 420 weddings a month.

To working with 67 Fortune 500 companies to build their management teams in Asia, hosting Vice President Al Gore in Japan after winning his Nobel Peace prize, to opening a K-pop event space in Tokyo.

And since 2017 coaching other B2B business owners his unique methods of transforming LinkedIn from a stale, resume profile approach to recreating your own personal mini-website in LinkedIn and using a sales funnel there to land clients.

When Tyron first went to Japan, he started out teaching English. He soon realized that the country had a lot of potential, and so he was always on the look for opportunities.

Tyron met a guy who was a CFO of a very famous Italian luxury brand, and they became good friends.

Fast forward many years, Tyron was a partner in a recruitment firm. He got in contact again with his friend. At the time, he was the CFO of Virgin Cinemas in Japan, and he was friends with Richard Branson and was quite a well-known guy.

Investing in the who is who in business

Tyron later got a call from his CFO friend saying that he had an investment opportunity for him. Knowing how much influence his friend had, Tyron was indeed interested in the opportunity. He met with the CFO, and he introduced him to his old boss, who was a big shot in the business world. He had partnered with an award-winning creative director. Investing in two big shots sounded like a good plan. Tyron was too excited to have been considered for this opportunity.

The two guys were starting a nutraceutical company, and the plan was to get it to $300 million. Tyron was entirely sold to the idea, and so he invested $300,000 into the company. The two founders’ previous success blinded him, and he believed they would turn the company over in probably six months.

Not as promising as it looked

Things did not go as Tyron had predicted. The two partners were burning through the cash, and they kept clashing about how to do things. One was very much about testing, while the other was about creativity.

Tyron kept the faith, and he believed that the two partners would sort this out and make it work. But he never got involved. He never asked why progress was so slow or what the plan was. Tyron was just happy to be sitting at the big boys’ table.

Running out of money and business

The partners blew through all the money they had. They decided to get a round of funding, but as they went out to look for investors, the global financial crisis hit.

All the investments dried up; the partners could not work together as much as they were friends at the start. They just closed and ceased operation. And there was Tyron with $300,000, now worth zero. That was a kick in the guts. Had he put that same money in Amazon stock, it would be worth $19 million today.

Do not let the thrill of hitting it big get in the way of making sound investment decisions.

Seek advice from an expert before you invest

If you are not an expert in the area you are investing in, find someone to do the research and due diligence for you.

Do not be blinded by the upside

Look at everybody and everything equally. Do not trust any situation with your money blindly. Ensure that you do all the necessary research because there is a lot to look into before you give anybody your money.

You have the right to know anything about your investment

When it comes to your money and your life, you have a right to ask questions. When investing in anything, ask as many questions about it as you want until you are satisfied that you know everything that you need to know.

Failure in business is not illegal

If you find yourself in a situation where your business is falling apart, and you’ve got to exit it, just do it without turning to fraud or anything illegal. Be honest with the situation. If you started a business, did your best, and it did not work out, know that this is normal; it happens to the best of us.

Have two extra sets of eyes that are not involved in the deal to do the due diligence and give you an assessment.

Tyron’s number one goal for the next 12 months is to bring three to five staffing agencies together, consolidate them into one, make it better, and then sell it a year or two later for a nice figure.

“Set aside your ego and know that if a deal looks too good to be true, it is probably. Always get someone to look over stuff for you.”