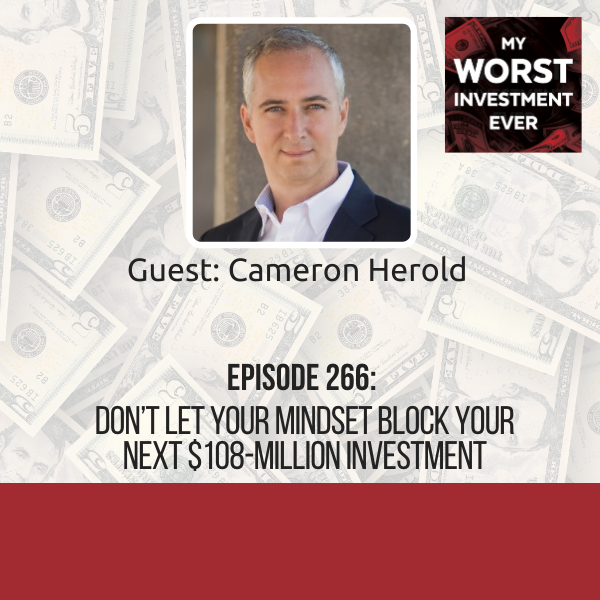 Cameron Herold is the founder of the COO Alliance & Second In Command Podcast. He is known worldwide as THE CEO Whisperer and is the mastermind behind hundreds of companies’ exponential growth. Cameron has built a dynamic consultancy by speaking, not from theory, but experience. He earned his reputation as the business growth guru by guiding his clients to double their profit and double their revenue in just three years or less.

Not only does Cameron know how to grow businesses, but the current publisher of Forbes magazine called him “The best speaker I’ve ever heard...”.

Cameron is the author of the global best-selling business book Double Double, which is in its 7th printing and multiple translations around the world, as well as Meetings Suck and The Miracle Morning for Entrepreneurs. Look for all of Cameron’s five business books on Amazon today.

“Working hard isn’t the path to success, but working smart is.”

Cameron used to judge people based on the way they looked. He naturally gravitated to the good looking guy, the woman who looked successful, people who dressed and carried themselves well. In his mind, those were successful people.

He would not give a thought to people who didn’t look successful, dressed more casually, who didn’t shave, probably overweight, and weren’t attractive. Cameron judged them as not being successful. He would avoid spending time getting to know them. Because he would judge very quickly, he would often miss out on opportunities.

In the summer of 2008, Cameron invited Tim Ferriss to come to his first time at Burning Man; it would be Cameron’s second time. Tim said yes and brought two friends with him. One of Tim’s friends was an entrepreneur.

At Burning Man, Tim and his timid friends didn’t quite fit in with Cameron’s group. Cameron’s friends did not embrace them, so they became the outsiders to his group. Being his usual judgy self, Cameron spent more time with his group than Tim and his friends.

The missed opportunity of a lifetime

One night, very late, Tim’s friend, the entrepreneur, wanted to pitch Cameron and his friends on a business that he was starting and had an investment opportunity. Cameron, however, did not give him any credit when he pitched his idea. He just brushed him off, thinking that because his first business was such a silly one, his second business wouldn’t be very successful.

Tim’s friend explained his idea of pressing a button on an app, and a taxi or limousine would come to you. Apps at the time were a new and unpopular phenomenon. Cameron and his friends thought that this was the stupidest idea they’d ever heard. Cameron and his friends refused to invest in the business. Tim, however, put in $25,000 into the business. This business turned out to be Uber.

The guy that Cameron judged as weird and not worth his time was Garrett Camp, the original CEO and founder of Uber. By saying no to him, Cameron missed out on $108 million, considering the company’s valuation the day of its IPO.

Do not judge a book by its cover

Do not judge people at face value. Take your time and get to know people before you judge them. When you go to conferences and other events, sit with people who don’t necessarily fit in. Get out of your comfort zone, meet new people, get to know them, and connect with them.

Opportunities are all around us

Do not judge what you see at face value

Don’t compare your insides to other people’s outsides. Everybody is broken in one way or another inside. Most people are trying to keep up a facade and look good. Don’t let this intimidate you.

Our mindset is shaped by our past, our emotions, and our judgments. Our mindset can hold us back in one way or another, so be open to changing it and have a growth mindset if you want to be successful.

Cameron is very cognizant about the time he has left with his kids, 19 and 17 years old. One of them is going into second-year university this year, and thankfully, he’s at home for four months because of COVID. His second son goes to university in 12 months, and Cameron feels a sense of loss already. Therefore, his goal for the next 12 months is to have meaningful time and connections with his sons.

“Remember that none of this matters. At the end of the day, we’re all gonna die. Let’s have fun along the journey.”