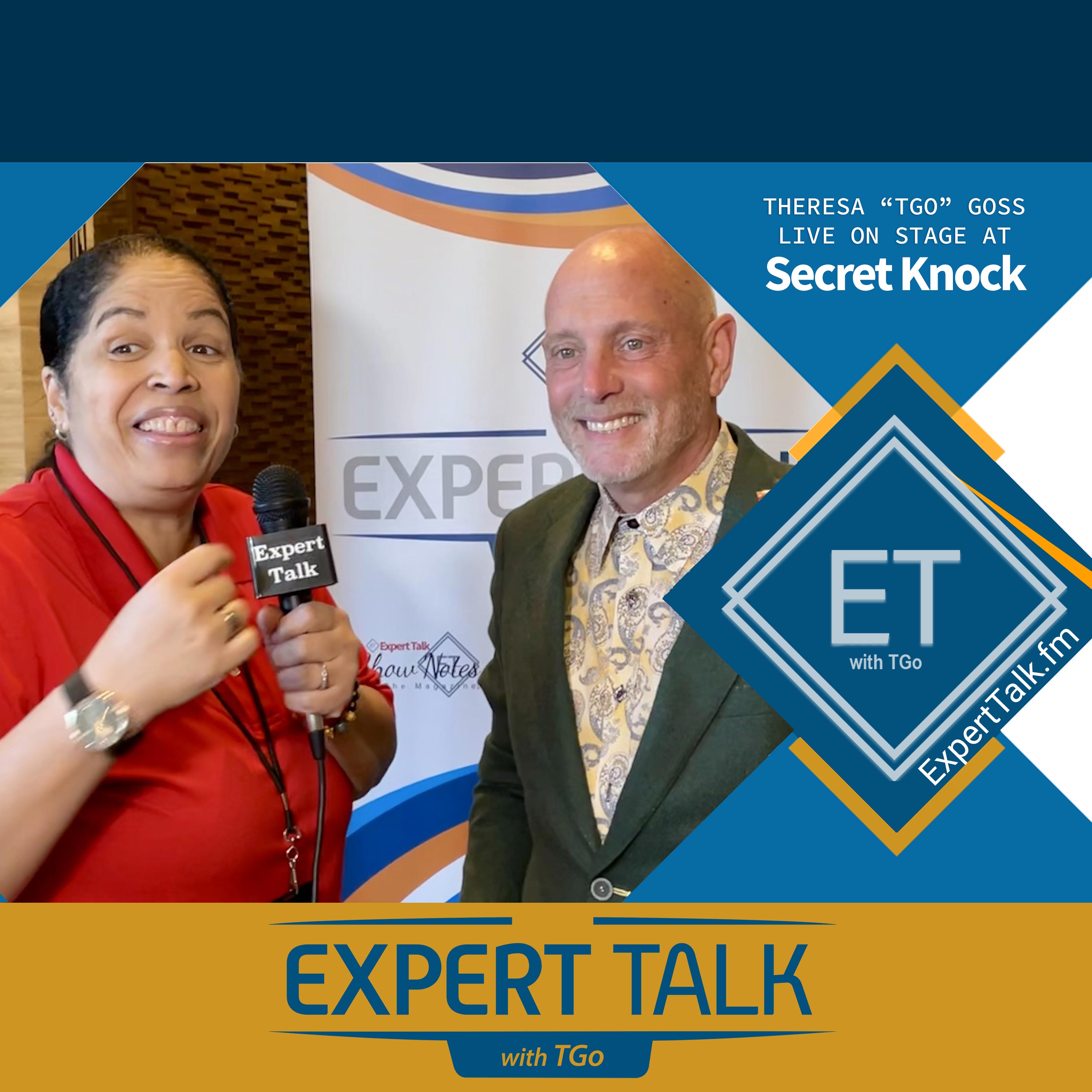 This footage was captured of Greg Reid interviewing TGo during the #1 Network Event in the Country... Secret Knock and we just had to share!

Expert Talk is sponsored by PodNation TV, the Podcast to Broadcast network. Here's what I love about TGo. There's so many people with podcasts. There's so many people that are doing these shows out of their basement, but they're not getting seen, they're not getting heard. And she had this idea to bring it to the forefront where all of a sudden you can start streaming that same information on major channels around the country.

So it'd be actually delivered into your home, your office. So people would absorb and embrace and actually appreciate that content. Could you tell us about how that? Well, I started in production 18 years ago. I'm a computer geek. So I was told the first time we did our digital magazine, very first one, then I was a producer and I said,

no, I'm a super geek. He's like sitting in the room and creating really cool stuff. Well, I got taken to Hollywood for almost a year. Every other week, got to put on a major set. And I was like, okay, I'm a producer. And then I've always been an entrepreneur. I started my first business when I was 10.

And one of the biggest things is right now. Yeah, you can turn on a podcast with your phone. You got a production company in your pocket right now, but the problem is you're putting it on the same platforms with everybody else. And we're a television production company. So why not be able to take entrepreneurs and put them in people's living rooms on their phones on 70 inch television sets.

I'm like we do it for other companies. Why can't we do it for entrepreneurs? So we're doing it. We're taking Podcasts up. This is what Larry Namer was talking about is taking something that's already in existence and giving it a different modality so that people can actually have access to it. But more importantly, they can get the attention that they're well-deserved, but you still got to drive the traffic as the author or the person of the,

you know, the show, right? I still got to drive the traffic, but look around this room. Could everybody who has a podcast thinking about doing a podcast, had been on a podcast, raise your hand. There you go. This is called delivering. I'm a veteran as well. So he just touched my heart. I'm a disabled vet,

but this is called delivering a powerful punch. Now imagine, you know, every time somebody comes up and they say, hashtag this hashtag that, why are they doing that? So your traffic drives their traffic and gets some more. So if we've got a thousand shows on a single network, PodNation TV, PodNation.TV, and we're on there together.

If you only got a thousand people following you, what's a thousand times a thousand. I went to public school. That's a lot of numbers. Okay. That's what we're doing. We're delivering a powerful punch together on PodNation.TV and Expert Talk. And let me ask you this. Could the average person do it, or do you have to already have a brand established?

Can they start from scratch with you? Start from absolute scratch. And to answer that question, I mean, I was going to save this for the end, but this is our contribution to the Tub of love. There's a card in there that says that if you come to Vegas, we'll put you in our studio will be $5,000 worth of production for you.

And by the way, she's going, she's doing a magazine right now, physical magazine. And she wanted to make sure that no one would read it. So she put me on the cover. So there you go. Look at that one. How cool was that? It was my first magazine cover So that is our Secret Knock, Special Edition.

A lot of people that were at Prosperity Camp, we were able, thank you, sir, for allowing us to do a few interviews that find themselves in here. We're gonna, we're gonna pass that around, but it's also digital. You will see a little play button under everybody's picture. If you click the play button, scan the QR code, you can watch the interviews on your phone because you remember,

I started as a techie. I program in 16 languages there. Yeah. So what do you see as the future? I mean, it's so many platforms. I remember when streaming came out, the big dogs would say that would never happen. The banks right now saying Bitcoin will never happen, right? Because they want to suppress the future of what's coming next.

What do you see what's coming next for us, We see as coming next is what we call DAAS, which is Distribution As a Service. So people contact us whether you want to be local and we can do a little, you know, geo-fencing and we'll get it and all that crazy tech stuff. My business partners are back there. Ann and Bruce back there,

Allen's over here. I'm sure Ann's going, don't go technical. You're on the camera. But if you want to just get your local market, that's the future. If you're trying to reach the globe, that's the future. Is there a way Connect? Do we know what geotracking is right now? Does everyone understand that Geo-fencing? All right. Th that not a lot of people.

So let's go down and explain this just so how important it is back in the day. If you did a billboard, for example, driving down a busy street in your hometown, that's trying to geotracking because the only the people are going to see it in there. So if you had a local service station, that would be your target audience today. If you do a blanket out on Instagram or Facebook,

and it goes to a worldwide audience, chances are it's going to go. Just, it's going to be decimated all over the place. So what you can do is make sure that if you have a podcast or a TV show, and you only want to track pet groomers named Barbara, that live in Wisconsin, you can go ahead and track them and you Can go even further.

We had a client in Maryland who got sick. She had cancer. She had a donut shop for 20 years. And when she went down for treatment, she's fine. Now, by the way, her assistant baker opened a donut shop around the corner. And when she came back to work, all of her clients were gone, right? So we created a geo-fence with a QR code.

And what ends up happening is once they scan that code into the app, when you get within a five mile radius of her donut shop, it sends a little coupon that says, come over here and get a half a dozen donuts or a dozen donuts for half price. So now everybody who's within that radius, for some reason, there's going past his donut shop.

So she actually doubled her business by geo-fencing. All right. Last question. If you could give counsel for upcoming entrepreneurs, I mean, you're a new entrepreneur. You've learned some great lessons over the last couple of years. What would you share? Well, I've been in business for 47 years. I'm 57. Whoa. Yeah. Fifty Seven years old,

I remember when we were kids too, but you're 57 years old. You think you're done? We're just getting started right now. And I'm going to tell you what I said in the beginning of this. There's the production company in your pocket. One of the biggest things our clients say to us is I wish I had more time. How many people here think I wish I had more time?

Understand what I'm saying? You can go on vacation. You can be here in Secret Knock you could be on somebody else's show. You could be out having fun at a basketball game with your kids. And your video is on somebody. Somewhere is getting to know you really well. Don't fake it. Don't try to be perfect. It's not about that.

People want to see who you really are. Video, never sleeps. Get out there. And if I can help we're here. TGo! Expert Talk is sponsored by PodNation TV, the Podcast to Broadcast network.