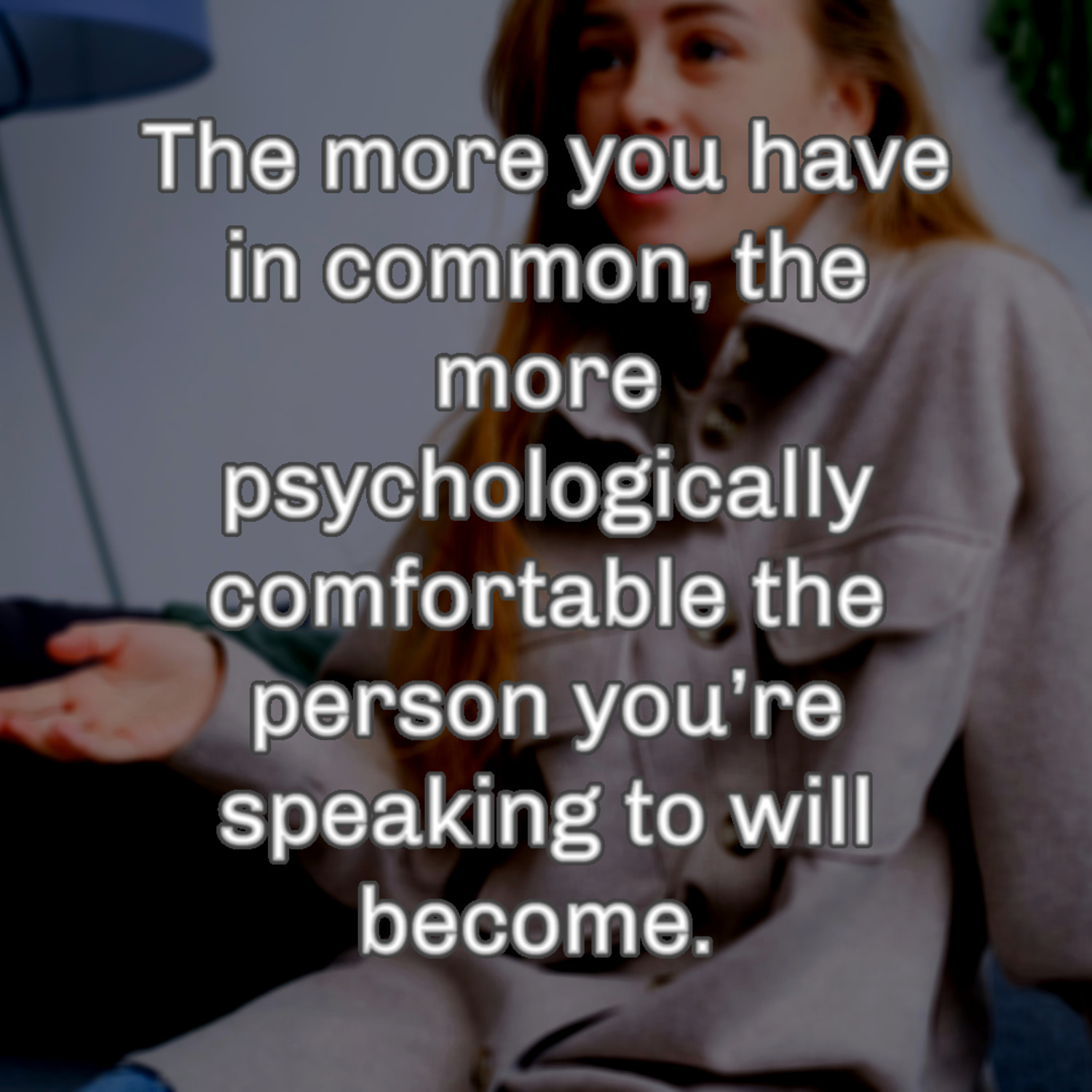 Sometimes humans are painfully predictable. Even without reading the contents of this chapter, you probably could have guessed that humans seek the following elements. We’re all just selfish, hairless apes. At least now you know the specifics.

People want to talk about themselves and express their thoughts and emotions. Studies have shown that it feels just about as good as sex to do so— psychologically, not physically.

People want to find those similar to them—because of all the assumptions that go along with those shared traits. If you do X, that means you do Y and Z, right? You’re just like my favorite person in the world, me!

The final aspect we’ll talk about regarding perception and social success has to do with a sense of identity.

Sometimes you meet people and you instantly hit it off. There’s no explanation why, but it just seems that you have so much in common and every new thing they say seems to be exactly what you’re thinking. From a simple comment about going to the same high school, to the fact that you both support the same basketball team, everything just seems to be working in your favor.

In these instances, you can’t help but feel that your similarities make you somehow part of a group that others don’t have access to. After all, you share so many interests and you’re finding it impossible to disagree on anything. It’s a small bond that you form in only a few moments, but from just a simple exchange, you will instantly find yourself favoring that person.

The study of in-groups versus out-groups reveals a lot about our identity and social psychology. We have a tendency to instantly like those we deem to be part of the same group that we ourselves are in. But why is this? How can we feel such a close and exciting connection even without knowing someone very well?

The students were divided into two groups, supposedly based on their preferences for each painting. They were only told that there were two groups and which group they had been assigned to. They were introduced to each other and then told which of the people they’d met belonged in each group. The real study began when they were asked to give points to a range of students within and outside of their group.

The findings made it clear that people showed a strong favoritism to those they believed to be part of their “group” and awarded them more points compared to those they perceived to be out of their group. It didn’t seem to matter that they had been grouped together over something arbitrary and unimportant.

This revealed a strong insight into the way our society works, and a very important social psychological process. Groups only exist because individuals perceive them to. Despite the fact that the students were grouped only a few minutes before awarding points, there was still the perception that a group had formed, causing in-group favoritism. They did not consider that they had no true connection to each other and no real reason to favor their group over the other. Once they had been given the impression that they belonged to one group instead of another, they instantly felt more favorably to their own group and less favorably to those not in their group.

This can be a very powerful advantage when utilized in real life. Even if people have no solid reason to favor you, if you can make them believe you are both members of a group that separates you from others, you will cause some favoritism to be directed your way.

Some argue that this tendency is hardwired into our evolutionary psychology. Imagine your ancestors roaming the grasslands of Africa hundreds of thousands of years ago. The in-group mentality would mean that someone would favor those they thought were part of their family or social group, assisting them in finding food and keeping up their survival. Without this in-group preference, our ancestors wouldn’t be able to pass on their genes to the next generation because they would be less motivated to help those around them survive.

Hundreds of thousands of years later and most of us still have that instinct, to prefer those we think share something with us and are part of whatever group we may have created. Knowing that people operate this way means you can use it to your benefit.

For example, if you were looking to hire someone to work at your company, and a potential candidate went to the same college as you, you would feel immediately more favorable toward them than before. Even if you hadn’t met them yet, or you hadn’t read their résumé, the mere fact that you both attended the same school would automatically give them a slight advantage in your mind. You belong to the same group. You are alike, you have shared experiences, and you should like them more.

If you know that someone shares something with you, whether it’s that you both enjoy a certain music genre, or you both worked in the same organization for a while, you can use this to your advantage and form a bond with someone who will lead others to favor you.

Having little things in common with one another can get you a long way. Try to create groups where you share similarities, inside jokes, and an appreciation of similar things and where you are all comfortable with one another. When you meet a stranger, all you have to do is mention a commonality that will liken you to them. Perhaps it’s a physical attribute, something they’re wearing, or some other personal detail about their life.

We can all relate to the excitement of the moment when someone mentions a detail and we can instantly say, “Me too!” This is related to the psychological concept of being attracted to similarity. When we find someone who is similar to us, or when we believe we share something with them, we immediately want to get to know them better and connect further. It’s all about the excitement of knowing that someone has seen, felt, or experienced something that you have, too.

This creates a bond, no matter how small or irrelevant it seems. We all want to connect with others, and even momentary links like these will attract others to you. They can’t help but lower their guard and be more open to you and the things that you say to them, because they see themselves in you.

It doesn’t have to be a difficult or insightful similarity. If you’re at a party and come across someone wearing a red shirt just like you are, you simply need to state how you’ve both decided “it’s red shirt day today,” and an instant bond will form. You’ll both smile at the revelation, and this single piece of common ground can act as a springboard for mutual ease. Everyone feels better and more comfortable around people who they know are similar to them or share commonalities.

You can’t let it end there, though, as this is just the beginning. Once you’ve identified the starting ground of your similarities, you need to build upon this. Ask questions that may lead to further agreements. They don’t have to be heavy, debatable questions, such as what their purpose in life is. Just light conversation about hobbies, jobs or interests is enough.

The more you have in common, the more psychologically comfortable the person you’re speaking to will become. This is because they can’t help but be drawn to someone they feel is a member of their in-group. It doesn’t matter that a group hasn’t been designated or formed in a concrete way. The person has already decided that you’re not a complete and total stranger to them because they identify with you on some level. All in all, it boils down to a person’s need for belonging.

Once they’ve lowered their guard, you can use the other techniques in this book to become even more likeable to them. The first step is establishing that bond of commonality and then building from there. Maybe they like the same kind of music you do. Maybe they went to the same school. It’s very easy to develop any kind of similarity with people and keep a constant stream of conversation around this. Your main mission here is to try to get the person to look at you as less of an alien and more as a part of their in-group.

It’s important to keep in mind that certain cultural groupings are more predisposed to this. Often those from America or Western Europe tend to be more individualistic and less taken in by group commonalities, requiring more effort for them to feel as if they’re part of the in-group. Alternatively, Asian cultures, especially more traditional ones, place a high premium on alma mater, social organizations, churches or religious institutions, educational institutions, and so on down the line. Even geographic origin—for example, if your ancestors come from a specific province of China—can be a tremendous source of bonding.

By using this in-group versus out-group dynamic to your advantage, you can target something that is deeply ingrained in others and become more likeable to them without much effort. Sometimes it’s the first step, the initial creation of common ground that is most important when building relationships. While certain cultures require a lot more prodding to trigger it, once established, this commonality can be an instant and powerful source of likeability.

Being the person that everybody is endeared to starts the very moment you begin interacting with them. The social sphere is not a battlefield, however; you simply have to be your authentic positive and simple self. There’s no hidden trick or tactic into getting people to like you. All you need is to recognize that what everyone’s looking for is an affirmation from others and sharing of commonalities.

The theories mentioned in this chapter tell us that to be liked by others, the effort first begins with you. Being appreciative of others fosters a positive cycle. It is the foundation of the groups where members look out for each other.