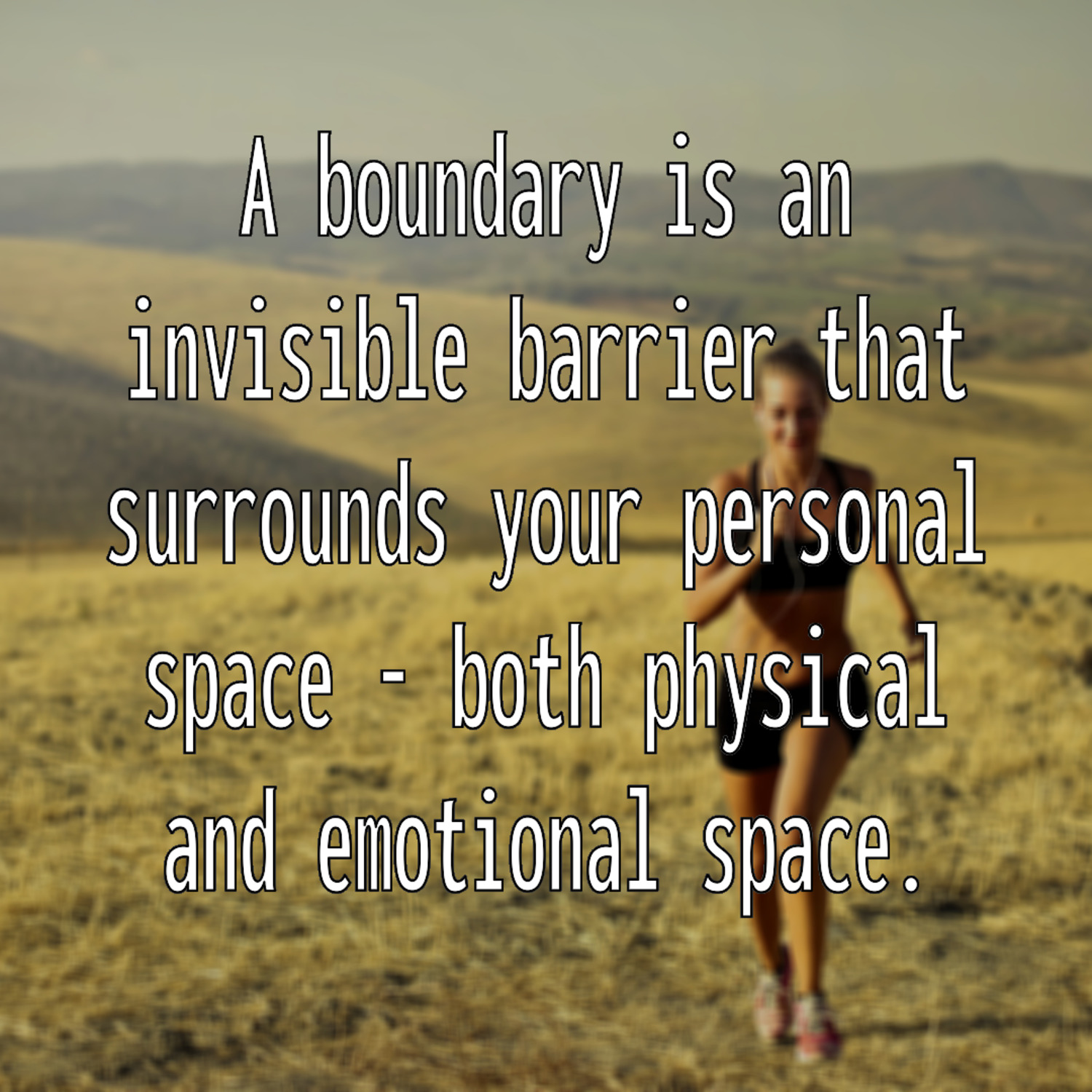 Strong and clear boundaries will be one of your best defenses against people-pleasing and the people who would have you do so. However, they can’t exist solely in your head, and they can’t be so flexible that people see no reason to abide by them. Thus, you must define them based on your values, and then communicate them clearly and enforce them without exception.

The other major aspect is setting consequences and then enforcing them. This is what happens when someone attempts to violate your boundaries after you’ve communicated them. This is can be whatever you want; the only thing it cannot be is nothing. Failure to do so will create porous boundaries, which are as good as no boundaries at all. However, they also cannot be too rigid.

A boundary is an invisible barrier that surrounds your personal space. This definition includes both physical space—the immediate, literal area around you—and emotional space. We’re interested in the emotional kind.

Boundaries set the limits of how much people can trespass into your emotional life. They regulate the “space” you need to be your true self with no duress, which you need other people to respect.

With sound boundaries, you feel freer to be yourself without the burden of others’ expectations or demands. At the same time, a reasonable boundary lets you invite who you want to share your emotions with—after, of course, you’ve defined your own personal boundaries based on your needs.

It can be difficult to acknowledge when others are invading our personal space and overstepping our limits. After all, you’ve projected yourself as someone who’s there for everyone all the time without any regard for your own necessities. For all intents and purposes, other people’s obligations are inside your boundaries. If that’s the case, then what is the point? So the first step in setting up healthy boundaries is understanding when that line is being crossed and what it feels like when it happens.

To do that, you can start by paying attention to your body and mind. When you’re around someone who’s troubling you or wearing you out, how does your body react? Some typical symptoms might be a clenching of the gut or tension in your head. Also, explain what goes through your mind when you’re around this person—is it confused, inattentive, or racing with ideas on how to get away? What small signs of unhappiness might you be experiencing on a regular basis? You may not be able to recognize violated boundaries in the moment, but the aftermath should be fairly telling. You’ll know how tense or unhappy you feel after an interaction.

After that diagnosis, you’ll have some time to define exactly what it is about this person that upsets you. Is it something in their character (are they abrasive, hyperactive, unthinking)? Are they more direct than you’re comfortable with? Do they say things to offend or annoy you? Be honest and unsparing with yourself—remember, you don’t have to share this information with anybody else.

With all the information you’ve just gathered—your physical reaction, your mental reaction, and your problem with the person—you’ve actually come up with a kind of alarm system. If you’ve ingested all these steps faithfully, the next time you sense any of those things happening, they’ll serve as a warning that you need to reexamine or set boundaries.

Here’s an example. Alexa and Elena are sisters. Elena had just introduced her boyfriend Daniel to the family. Daniel started coming to family functions for a few months, and gradually Alexa found herself hanging out with Daniel more often.

But something happened when Alexa was around Daniel. Her stomach got upset when Daniel asked her a question. Her mind got cluttered. Her nerves reacted, and she had the inclination to flee. But she didn’t want to tell Daniel off, because she’d possibly tick off Elena and cause a family ruckus.

After Alexa thought about how she reacted around Daniel, she realized he seemed curiously over-interested in other people’s private lives—specifically, the romantic parts. Daniel was uncommonly frank in their conversations and sometimes asked for personal details that went too far. And he did so in a pleasant way, as if every family in the world has these kinds of conversations freely and openly. He didn’t realize his questions were causing tension. But they drove Alexa, a very private person, up the wall. Alexa diagnosed the situation and decided to set some boundaries.

Sure enough, the next time they were together, Daniel started interrogating Alexa about her online dating history. (Alexa had told Elena she’d sworn off online dating for good, which Elena must have told Daniel.) Alexa, very calmly, told Daniel, “Look, I’ve been giving this a lot of thought, and I just don’t feel comfortable discussing my private life in that much detail. I know you don’t mean harm and I appreciate your friendliness, but I’m asking you to respect my limits in this matter.”

Daniel was taken aback. He had no idea his questions weren’t appropriate. He mumbled an apology and walked away. He never asked Alexa anything again. Elena’s relationship with Daniel went on for about eight months after the confrontation. While Alexa never cozied up to Daniel in a meaningful way, they did manage a civil and friendly rapport with each other until the breakup, after which Alexa never saw him again.

Sometimes there will be fallout from setting boundaries, especially among those who are oblivious as opposed to malicious. But the fallout is almost always worth it—look at the tradeoff Alexa made. Though it may be difficult for you to see in the moment with emotions running high, it’s not even close.

Now it’s time to do some serious self-investigation and come up with a firm set of boundaries that’ll help you curb your addiction to a lack of assertion. Here are some processes that will help you along.

Determine your core values. Life can be so hectic that you don’t have a lot of time for knowing who you are and what you value. Some of us never have that kind of introspection even when we have time to do so. Sometimes, when we try to think about what we believe or value, we may only think about what others tell us to believe or value—our religious beliefs, cultures, or traditions.

It’s essential to put all that aside for a little while and concentrate on what you, the person, really esteem and what makes up your own, individual personal code. To figure that out, think of things that make you uncomfortable in some way and how they cause you to act. They don’t have to be huge, important, or even significant things. They can just be events that happen regularly enough for you to notice them.

For example, Howard couldn’t deal with paying an exorbitant amount of money for a parking spot. It didn’t align with his values (or, probably more to the point, what he could afford). But he lived near a big city where he went to professional sporting events, where parking spots regularly cost almost $100 for six hours. No way Howard was dealing with that. Instead, he drove to a park-and-ride and took light rail to the game for $5 per round-trip.

Fascinating story, I know. But even this rather slight tale offers a couple ideas about Howard’s values:

He’s frugal, at least when it comes to parking spaces.

He’s fine with taking “the long way” if he needs to.

I call those statements “surface values,” because they’re just a series of indicators as to what Howard’s core values might be. By doing a little reverse-engineering, we can come up with examples of Howard’s potential core values:

Try this mental exercise on some of the things you do. Take a situation, routine, or event in your life, think about how you act in it, and try to relate them to values you have. You might find some values you weren’t completely aware of. Come up with as many examples as you can—eventually, a few core values will keep popping up more than others, and those are probably the ones you really believe in.

Here’s one important thing to remember: when you’re doing this exercise and the event you’re analyzing involves your relationship with someone else, make sure you focus on your values and what makes you comfortable or uneasy. Don’t consider what the other person might value or frame your values in the context of the relationship. You have permission to be self-centered in this procedure. Achieve a firm understanding of what you stand for.