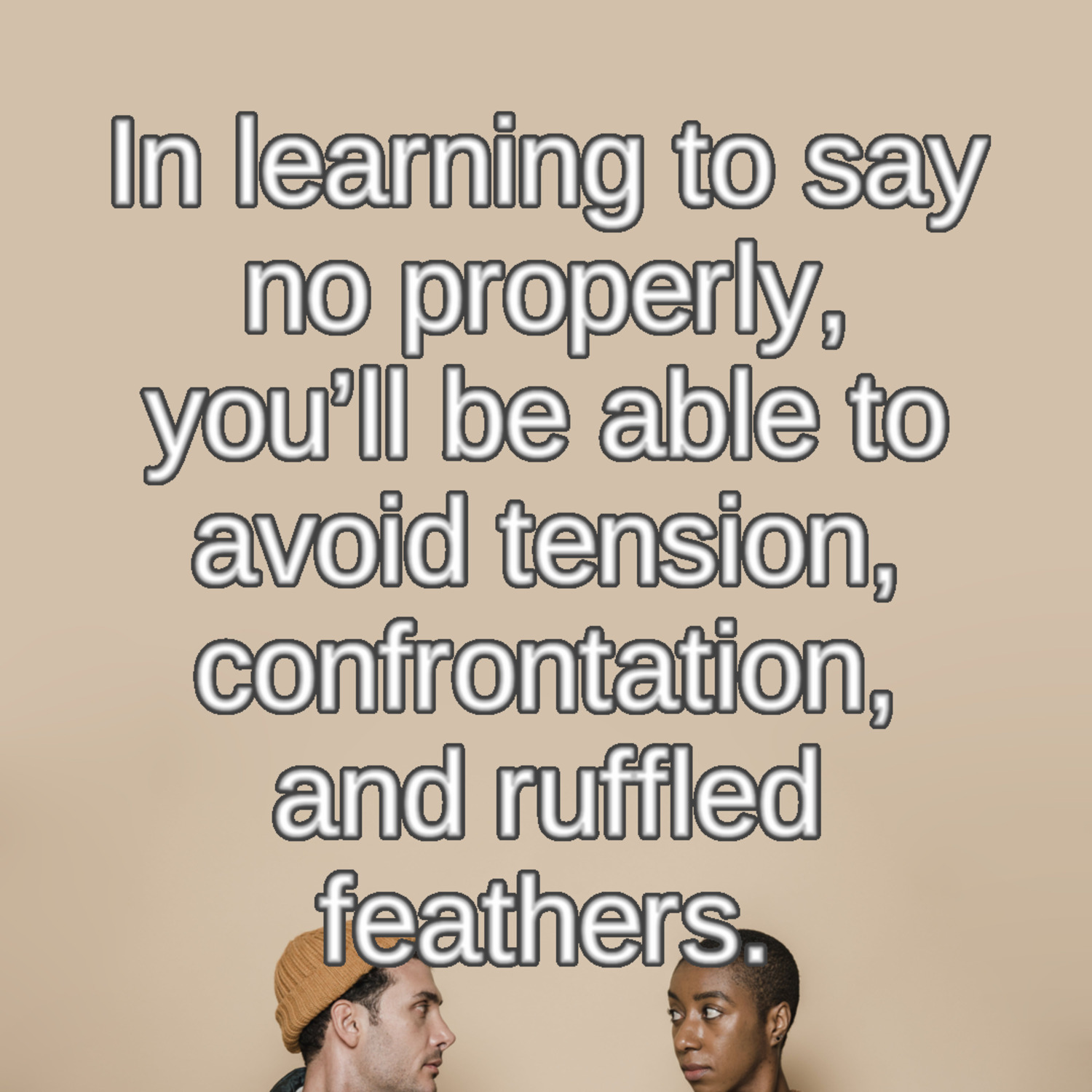 Other methods of saying no include planting preemptive seeds, emphasizing how you are tied to other people and can’t act independently, reflecting and acknowledging, referencing the fact that you can’t do everything at once, resisting the moment where you want to insert an addendum or caveat, creating hoops for people to jump through and themselves say yes to, baiting and switching with related or unrelated tasks, keeping it nonpersonal and focused on the specific circumstance, and passing the buck to someone who appears to be able to solve the problem at hand much better than you.

If you can’t just say no or if you can’t say no immediately, another option is to defer the decision or punt it into the future. Tell them you’ll think about it and, if applicable, ask them to do something to prepare you for it. In other words, put the burden back on them by requesting something to help you consider their request.

Let’s take Jonathan, who is very smart and mentors companies. He is asked for coffee all the time from people who would like to “pick his brain” and otherwise soak up information from him like a sponge. As you can imagine, he doesn’t have time for everyone that asks him. He has to say no quite frequently, but he’s devised a way around it. He creates a hoop for them to jump through before he agrees to anything further. When someone asks him for coffee, he will ask them to send, via email, an agenda or plan of what they want to discuss and why. He doesn’t hear from 99% of the people again.

As you can see from Jonathan’s case, it becomes very clear who just wants to use you for something without being willing to contribute in any way or make it easy for you. When someone asks you for something, create a condition for them to fulfil in order for you to consider their request. It will buy you time and space, and most people will never get back to you because they would have to put in the work!

Another related way to say no is something to the effect of “I’m not sure right now, but can you follow up with me?” It has the same effect of shifting the burden onto someone else, and we already know, of course, that the best-case scenario from shifting the burden onto someone else is that they just leave you alone out of laziness or they forget. You can also use the variety of “I can’t right now, but maybe when my circumstances change.”

Bait and switch. Another option, if you’re having a tough time saying no, will be to offer a bait and switch yes: “I can’t do that, but I can do this.”

“I can’t spend all day helping you move to another apartment, but I can give you two hours.”

“I can’t go out with you this weekend, but I promise that I’ll make some time to do that within the next month.”

“I can’t serve on the board, but I’ll be willing to consult on an ad-hoc basis whenever I have time.”

What you’re doing here is saying no to the request and offering a smaller consolation prize that may or may not be refused. It may be a legitimate alternative of something you are willing to do, but it doesn’t have to be. With this phrasing, you are telling people the maximum that you are willing to consent to. They may not see it that way initially, but that is the boundary you have set with your counteroffer. There is no reason you should negotiate.

Your no is disguised because you appear to be still open and willing, at least on the surface. If you offer something relatively small, people will likely refuse and tell you not to bother with it. Even better is if you don’t provide specific detail and leave it as open-ended as possible. In most cases, the bait and switch will result in freedom from an ask or obligation. This tactic alleviates most of the tension because you are saying yes to something, just not what is specifically being asked.

Keep it nonpersonal. Many times when we say no, it feels terrible because we know how we’d feel when we get rejected. We might take it personally and ruminate on how much someone doesn’t care about us or perhaps how the symbolic value is lacking. Therefore, it’s important to keep your no as nonpersonal as possible and as focused on the specific situation at hand as possible.

In essence, you are rejecting the person because of the situation and circumstances, not because of the person themselves. Some people have difficulty separating the two, but the former is much, much easier to both speak and hear.

For instance, you are invited to a friend’s party only to learn that your ex, with whom you had a particularly nasty split, will be there. Your friend is giving you grief about passing it up, but in reality, it’s not about your friend: it’s about the situation and being in an enclosed area with someone who makes you nauseous. In this case, you would emphasize that you aren’t saying no to spending time with your friend, which is what they might perceive, but instead saying no to being in your ex’s presence.

A little bit of regret always helps—for instance, “I’d really love to and I was really looking forward to hanging out with you, but I can’t!” When people feel validated and not rejected, they’ll accept a no far more easily. Just be sure to focus on the specific circumstances and how they won’t work for you.

Reflect and acknowledge. This is where you take care to appear empathetic to what people are asking. “I hear that you want me to help with that report because you’re really busy, and don’t want to bother others, but no, I simply can’t do it.”

Sometimes, much of the negative reaction in saying no stems from a perceived lack of listening or caring. In other words, people become offended because they feel that a “no” means you didn’t hear them. This is usually not true, but you can attempt to stem some of this tide by ensuring that you acknowledge what they say before you say no. Reflect their feelings and what they want from you. It’s a bit like how if you repeat the last three words of someone’s sentence, it makes them understand that that you heard them (even though it’s just a formulaic response).

Sometimes, though not always, people are asking due to a perceived need. If they feel that their need isn’t heard, they start to feel injustice and even righteousness. Address this first by appearing to be on their team, emotionally at least, and you may have more success with saying no.

Pass the buck. Here, you aren’t saying no as much as “Yes, but…” Allow me to explain. Passing the buck means passing the responsibility onto someone else who is not you.

It’s when you suggest that someone else would be a much better, more qualified fit than you, and thus, you should bow out. You wouldn’t do the requester justice, but you can still help them solve their problem by finding someone who will. The requester won’t necessarily hear a no, which is the most important part.

For instance, if you are asking someone to drive you to the airport, you might say, “No, I’m a terrible driver and driving on the highways make me feel anxious, but Ted is a great driver and might be free that day!” You’ve successfully passed the buck to Ted by making yourself pale in comparison to how Ted might solve the issue. It can even appear to be as if you are doing them a favour and brokering a valuable introduction.

People ask you for things because they want to solve a problem they have. If you make yourself seem like a terrible solution, but at the same time can point them in the direction of a real solution, you’ve avoided a duty and they’ve still gotten what they wanted.

Here are a few additional particular turns of phrase to use in your quest to refuse people to their face:

Become the last resort. “I can’t right now, but let me know if you can’t find anyone else and it’s possible that I might have capacity or time.” The obvious hope is that they never come back to you, or when they do, that you still don’t capacity or time.

It’s not up to you. “I promised my significant other that I wouldn’t do that anymore. I need more balance in my life, or I will be in a world of hurt, if you know what I mean. Sorry, it’s not up to me!” This is where you blame someone else in your life to say no and alleviate responsibility off yourself. A bit avoidant, but still effective. Just make sure your scapegoat knows.

I can do only this. “Well, I can’t do X, but I can do Y.” X is what is being asked of you, and Y is a tiny fraction of X. The hope is that they have no use for Y, so they just leave you alone. This shows your supposed willingness and goodwill, but also sets your boundaries.

Punt. “Let me think about it, and I’ll get back to you.” Of course, you never get back to them. This is both my favorite and least favorite method of saying no. On one hand, it tells people that you are somewhat willing and are interested in helping out. On the other hand, most people will recognize this statement for what it is: that you probably will never get back to them. It’s not the most effective means of saying no, but it can be used if someone persists and doesn’t take no for an answer.

Like any skill, the ability to say no is often an acquired talent. You, too, can learn how to say no. It may take some time and some practice, but when you become proficient at saying no, you’ll wonder what to do with all the free time you now possess. When Jack told Carlo he would not be able to help him move at the end of the month, he was able to do so because he was resolute in his statement. Jack didn’t leave Carlo with the idea that this decision was open for discussion.

As mentioned before, you’re going to face at least a little repercussion for standing your ground. That’s going to happen when you start saying no as well, even if you use some of the more creative ways we’ve talked about in this chapter.

The people you used to automatically please might be unreasonably offended because they’ll no longer have regular access to you. They’ve been accustomed to just expecting things from you and your doing them without protest. That’s not the case anymore because you’ve altered that relationship, so you can expect some initial blowback.

But in time—just like when you set your boundaries—that anger will recede and hopefully evolve into respect. You’ll be seen as someone who is responsible, organized, and deliberate, not just an over-willing people-pleaser.