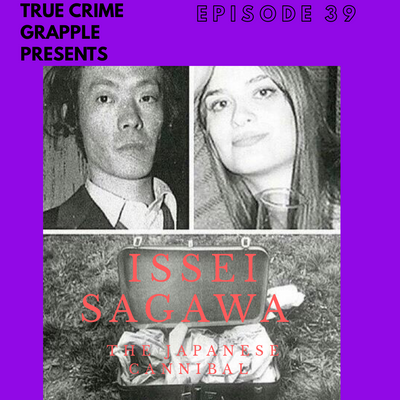 Issei Sagawa was a small, shy, and studious man from Japan who had always been preoccupied with thoughts of eating another human being.  After moving to Paris, France, to obtain a PhD at Sorbonne University, he felt more alone and out-of-place than ever as he struggled to suppress his darkest desires.  He was never good at making friends until he met Dutch expatriate Renee Hartevelt, herself a doctoral student.  As their friendship continued over the weeks, Issei was finally coming out of his shell but not without bringing him to commit the vilest of acts on the least likely of victims.

Editing and Music by Baba Beats @bvbvbeats on Insta

Show promo from The Abyss pod. Check them out for more true crime or at their website https://theabysspod.com/

www.truecrime-grapple.captivate.fm for all past episodes, social media links and donate button.

Excuse Me For Living: The Curious Case of the Japanese Cannibal.  Directed by Evans, Nigel and Tezuka Yoshi.  Channel Four Film, 1993.  URL: www.youtube.com/watch?v=VCRnWYiq7uQ

France, Clive.  In the Fog.  WordPress.com  https://bookreviewsjapan.wordpress.com/.  Accessed 01 May 2020.

Harritz, Pia D. "Consuming the Female Body: Pinku Eiga and the case of Sagawa Issei". Mediavidenskab. Archived from the original on July 2, 2007.