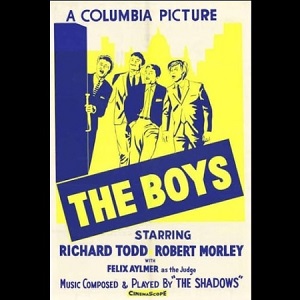 Episode 23 is all about generational conflict – specifically, older people disapproving of “kids today”. In the film chat, Dom talks to members of the South Bank Talkies movie discussion group about The Boys (1962), a courtroom drama in which four young men are on trial for murder. Starring Dudley Sutton, Jess Conrad, Tony Garnett and Ronald Lacey as the boys, they also have to contend with the prejudice of the court & witnesses against “teddy boys”.

The film has a great ensemble cast including Richard Todd and Robert Morley as the barristers and Roy Kinnear, Wilfred Bramble, Carol White and David Lodge.

The Shadows provided the music for The Boys and released this EP.

Erratum! In the episode, I mistakenly call Tony Garnett, Tony Garrett and refer to the character called Webster as Webb. Apols.

We also met up with Shanne Bradley, founder member of punk band, The Nipple Erectors (later abbreviated to The Nips) to hear about her time on the punk scene and how she views subsequent youth subcultures that have come along.

In 2000, this restrospective compilation album of Nipple Erector and Nips songs was released: The Tits of Soho.

In the discussion about The Boys, one of the participants mentioned the Lombroso theory of criminal behaviour. You can read about that HERE.

If you’d like to hang out at the BFI with the South Bank Talkies group, wearing black polo neck jumpers, smoking cheroots whilst earnestly discussing film (it might not actually be like that….) you can find them HERE