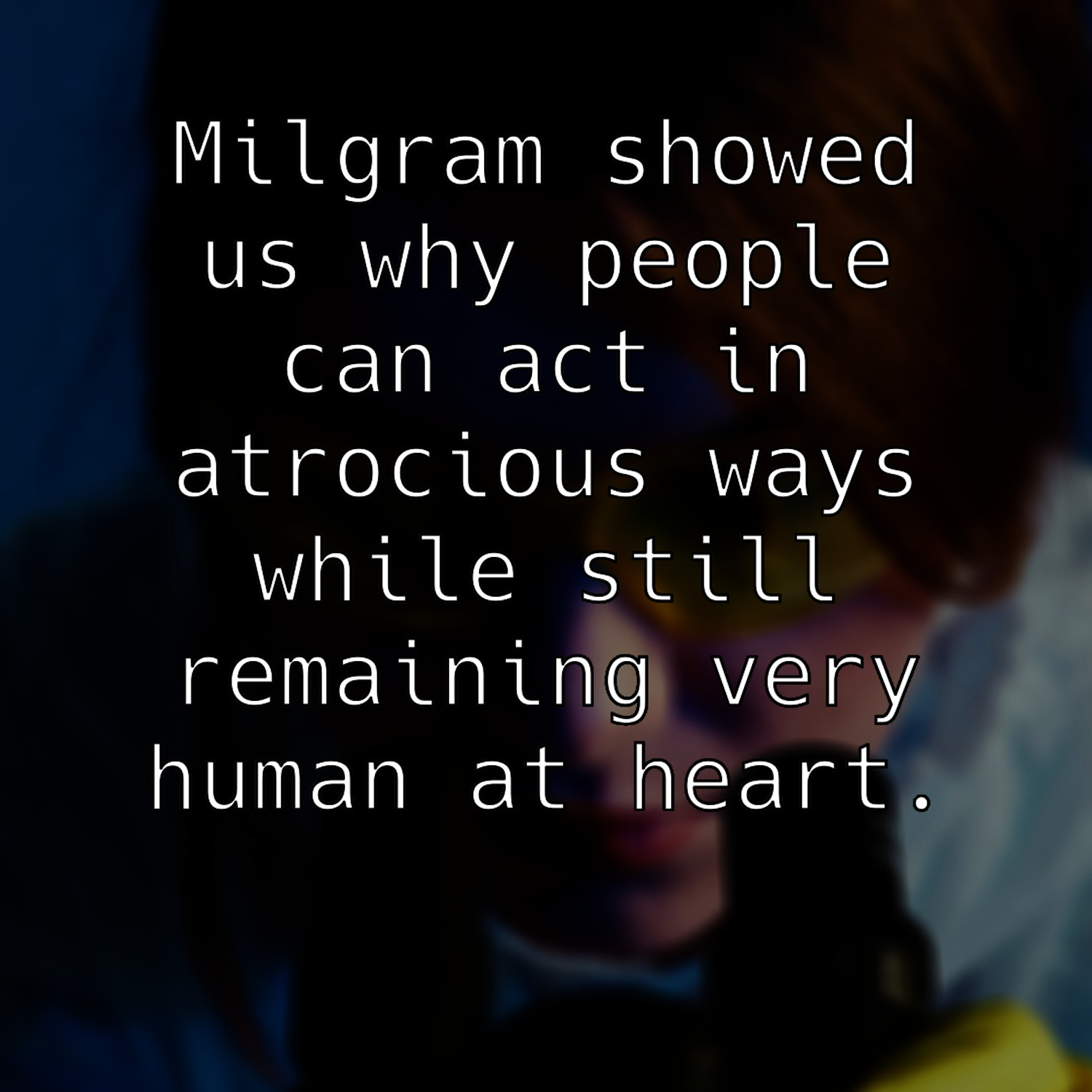 The last way we must struggle to keep an open mind and clarity of thought is in relation to our social influences. The people around us can determine what we think and do, no matter how hard we try. This was proved in the Asch Conformity Test and the Milgram Shock Experiment. It doesn’t matter how open-minded you are, your environment has the ability to push you strongly in one way despite your best intentions.

experiment chronicled in his: 1963

People aren’t inherently evil and don’t necessarily use their free will to inflict such harm. Instead, Milgram showed us another explanation as to why people can act in atrocious ways while still remaining very human at heart. It can serve as a general lesson on why people who are capable or who have done dark things aren’t different from you or me.

After all, that is the reason soldiers go through boot camp and are berated endlessly by drill instructors—it is a process designed to promote obedience and conformity, even in the worst conditions that combat will present.

However, Milgram’s experiment showed it wasn’t only trained soldiers who could fall victim to such blind obedience and have their free will taken away from them. Milgram built a “shock machine” that looked like a device that would be used to dole out torture, but in reality, it did nothing and was mostly a series of lights and dials. This would be his tool for exposing human nature.

His experiment worked on the premise that the participant was administering a memory test to someone in another room, and if the unseen person made a mistake on the test, the participant was given the instruction from a man in a lab coat to punish them with electric shocks stemming from the “shock machine.” The shocks would escalate in intensity based on how many wrong answers were given. Before the start of the experiment, the participant was given a 45-volt electric shock that was attached to the shock machine. 45 volts was where the shocks would begin and then increase in 15-volt increments with each mistake. The shock machine ranged up to 450 volts, which also had a warning label reading “Danger: Severe Shock” next to them, and the final two switches were also labeled “XXX.”

The unseen test-taker was actually an actor who followed a script of getting the vast majority of the questions incorrect. As the participant administered shocks, goaded on and encouraged by the man in the white lab coat, the actor would cry out loudly and begin to express pain and anguish, begging them to stop and then eventually falling completely silent.

In other words, the participants weren’t coerced within an inch of their life to, in their perception, shock someone to unconsciousness or death! 62% reached the 450-volt limit, and none of the subjects stopped before reaching 300 volts. At 315 volts, the unseen actors went silent. The participants weren’t being forced to do this; neither were they being yelled at or threatened. How could these results have occurred?

Are people just callous, with little regard for human life and suffering outside of their own? That can’t be true. What’s more likely to be true is how persuasive the perception of authority can be in subverting our free will. We will act against our wishes if we sense that we are being ordered to by someone who has power over us, no matter how arbitrary.

This obedience to authority and sense of deference can even push us to electrocute an innocent person to implied death. Suddenly, things such as genocide, the Holocaust, and torturing prisoners of war don’t seem so far-fetched. We like to think we have hard limits on what we could inflict on others, but the results of Milgram’s experiments showed otherwise—our free will can be completely bypassed because of a simple display of authority.

Milgram noted other factors might be the feeling that because there was an authority figure, they would hold no accountability and be able to say, “Well, he told me to!” When the participants were reminded they held responsibility for their actions, almost none of them wanted to continue participating in the experiment, and many even refused to continue if the man in the white lab coat didn’t take explicit responsibility. Additionally, it was an unseen victim they had never met before, so there was a degree of separation and dehumanization that allowed actions to go further.

In the end, a normal person was shown to have followed orders given by another ordinary person in a white lab coat with a semblance of authority, which culminated in killing another person. It was quite the discovery in terms of what drives and motivates people. It was a very powerful piece of evidence that clarity of thought is subject to all manners of delusion and influence.