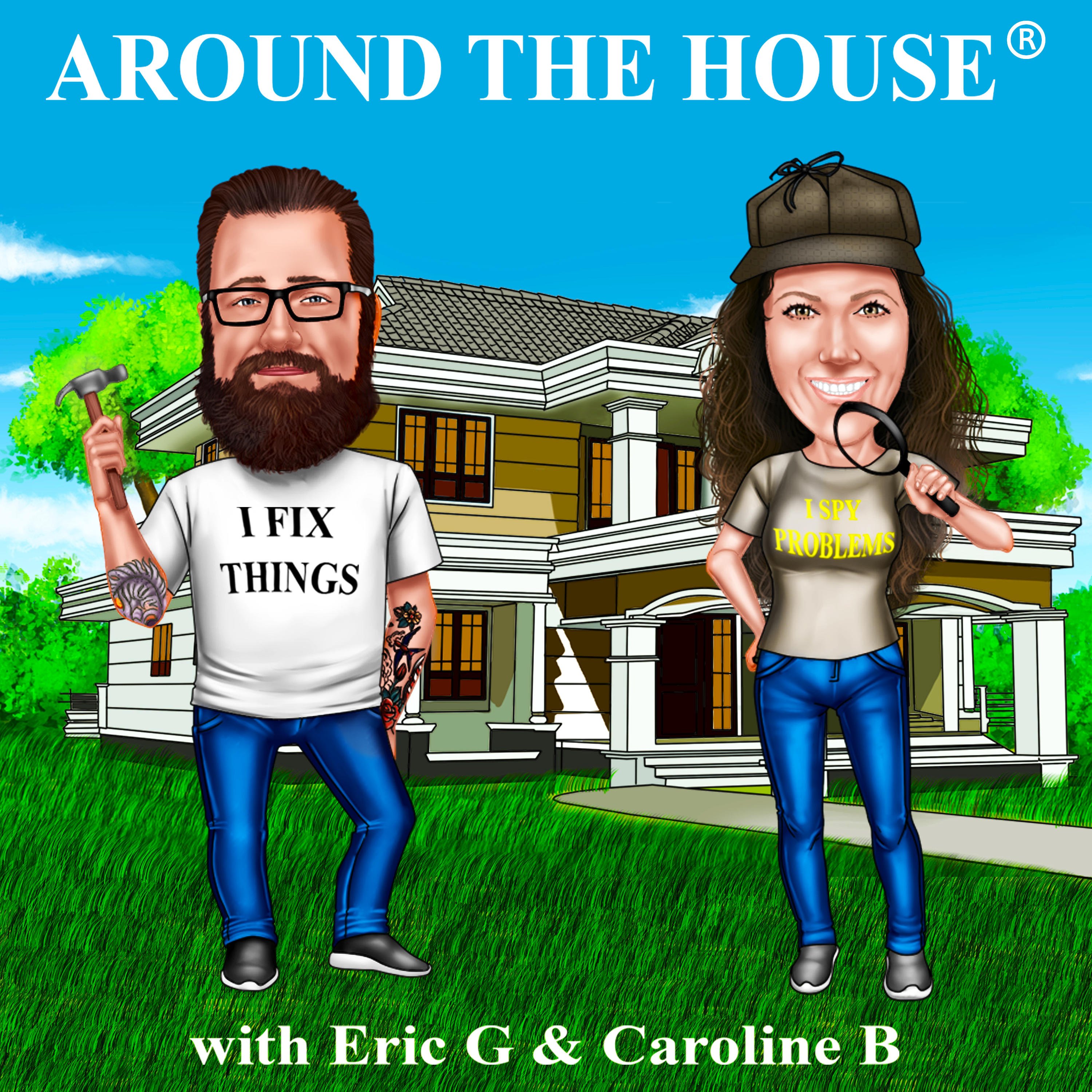 Information given on the Around the House Show should not be considered construction or design advice for your specific project, nor is it intended to replace consulting at your home or jobsite by a building professional. The views and opinions expressed by those interviewed on the podcast are those of the guests and do not necessarily reflect the views and opinions of the Around the House Show.

[00:00:17] Eric Goranson: When it comes to remodeling and renovating your home, there is a lot to know the we've got you covered. This is

[00:01:04] Eric Goranson: And of course, when I'm out, Caroline's out doing her stuff, playing catch up on her day to day work stuff. Now I wanted to talk today a little about being a homeowner. and a recession now we're not gonna get into the politics of the recession stuff, but obviously, you know, things are not great right now in the economy.

[00:01:44] Eric Goranson: So this is not professional advice, but I'm gonna give you my opinion, at least on what's going on here. We have a huge shortage of homes out there. New construction's gonna slow. You're gonna see existing home sales, I think still cranking along. [00:02:00] We still have people that are evicting renters, unfortunately, out of rental homes.

[00:02:30] Eric Goranson: now I think that, uh, with interest rates people, you will see them go out and still buy that home if they can afford it. And, uh, maybe in a couple years when, uh, interest rates get back down again, you'll see people refinance and get through that. So that's kinda what I think with that part of it. Now you, as a homeowner with things being so expensive right now, this is kind of what I would do, you know, as we know.

[00:03:14] Eric Goranson: So he is almost a year out. So you're seeing that with plenty builder. now I don't think on the remodel side and the addition side, that's gonna change here anytime soon, but a lot of people are gonna be doing cash versus going out and getting loans on that. So that's not a surprise. So my first advice to you as a homeowner, and of course being around the house, being a show, mostly homeowners are people wanting to be homeowners.

[00:03:59] Eric Goranson: I'm gonna be shooting [00:04:00] a new video form here this next week. So we'll be doing some stuff on that, but really if you can watch your electricity usage and make sure you're managing that correctly, watch your water usage if you're paying for it. And of course, natural gas, if you have. Those are things that can save you money.

[00:04:41] Eric Goranson: Maybe it's windows, maybe it's insulation. Maybe it. You know, take a look and see what those things are that could save you some money. And if you can save money on that, let's put it in money back in your pocket. Now, if you're not gonna move and you're gonna hang around for a few years and you're just gonna kinda wait this whole thing out, you [00:05:00] can do a lot of things that help your investment.

[00:05:28] Eric Goranson: So it's one of those things that you should be careful. so more securities we get into fall and wintertime, you know, with, uh, things being tied out there that tends to lead to more crime because people that, uh, you know, when things get more expensive with inflation, that pinches 'em and, uh, the people out there that love to commit crimes, things are even tighter for them.

[00:06:05] Eric Goranson: So alarm systems and lighting out front, those are all great things. And of course, if there's a way for you to do a heating and cooling system, those are not getting cheaper either. So if there's something you can do there to keep that, you know, cost under control. Maybe it won't pay for itself, but you can sure.

[00:06:39] Eric Goranson: Make believe crystal ball. I don't see any crashes coming. You know, I think that we're gonna still see new building as we keep going. We've got a lot of baby boomers that are starting to get out of their homes, but we've got this younger millennial and, and, you know, gen Z groups that are coming up that are large groups of people.[00:07:00]

[00:07:30] Eric Goranson: So we have a lot of people since our crime is low here, moving out of the more metropolitan parts of the city of Portland that have the high crime they're coming over here to raise their kids and put theirselves, you know, put their kids in good schools and that kind of thing. So there's still gonna be a demand for that kind of thing.

[00:08:06] Eric Goranson: And for us here, I think, uh, in the Pacific Northwest where I'm located. You know, making sure that things are safe through fire season here for the rest of the time is gonna be big as well. Cause I still think as dry as we are now, we still have some fire season left of us here on the west coast that, um, we haven't had the weather to really do that.

[00:08:43] Eric Goranson: So being prepared, making sure you got your, your, your stuff saved up your food, your water, your filtration, those kind of things. Always good for that. Uh, Late summer storms. And of course, coming into wintertime, it's gonna be really good. I had this conversation with my son who just moved out to [00:09:00] North Dakota here a few weeks ago.

[00:09:21] Eric Goranson: But we were talking about that. Virtually same thing of making sure that he's got backup power and some of that stuff ready to go because, uh, when wintertime hits, if he loses power and it's, you know, 20 degrees below zero, it doesn't take long for that heat to come outta the building. So, uh, we're working on some plans for him out there.

[00:09:56] Eric Goranson: That'll be coming out here soon, uh, you know, in the next few months. [00:10:00] So stay tuned for that. You'll see a lot of that on social media. You know, as we get closer to that. So something to keep in mind, you know, and there's a right now, I think we're starting to see two on the garage, front out there. We're starting to really see people putting in.

[00:10:39] Eric Goranson: And if that could save you some time and some money and help you sell that house down the road. You're gonna be much better off. Well, we've got some good shows coming up ahead. Uh, this next weekend that I'm looking forward to, this is gonna be a lot of fun. Uh, we're gonna be talking first about how to build that game [00:11:00] room or gaming room.

[00:11:21] Eric Goranson: So we're gonna talk about that as well. And then hour number two, we're taking it outside to outdoor decking and railings with our friends over at decorators. now those guys there have lighting decking and a bunch of new stuff, including railing systems. They have some really cool stuff that we're gonna be talking about.

[00:11:56] Eric Goranson: And a great conversation with you. So I think I'm looking forward to that one. It's [00:12:00] gonna be really cool. So something to consider and then, Hey, if you're out there, um, you know, looking around, here's one thing on the recalls I wanted to mention out there. So this is something, um, that they've had here that just came out here last week.

[00:12:38] Eric Goranson: The molded plastic drain pan located at the bottom of the evaporative cooler can overheat melt into form. Posing a fire hazard. So there's about almost 300,000 units. You should take a look at. So if you've got one of these units, You should contact dicon comfort technologies, manufacturing to determine whether [00:13:00] your unit is included in this recall, and then register for a free repair by a qualified technician.

[00:13:27] Eric Goranson: So that that's a, a, a big deal right there. So I wanna make sure that, uh, that we catch that before you have a fire hazard. Anytime we see something like that, where we could have a fire hazard, that can be a, a huge deal. So make sure you've got that. And then, um, there's some other stuff here too, that we're, we're watching out for.

[00:14:10] Eric Goranson: I'm seeing, uh, one by Textron one by a segue, uh, which is a, uh, a quad type and KT. North America, uh, have got some issues there as well. So, um, be careful with that. They've got a thing where, um, the motorcycles connecting rod can break posing, crash and injury hazards. So again, be careful with that stuff. So there's a lot of great recalls out there to pay attention to.

[00:14:53] Eric Goranson: Of course, this is on the podcast only right here, but make sure that if you're on iTunes, that you click that subscribe button. [00:15:00] And, uh, download it. So you've got all the latest episodes automatically download that way or any one of your favorite podcast things. And then we'd love to hear comments. So you can head over to around the house, online.com, where you can put in a question to us.

[00:15:37] Eric Goranson: Dot com and we will get you right there. All right, everybody have a great rest of the week. Make sure you tune into the show this weekend. We've got a great one ahead and, uh, watch out for my stuff this week, uh, for the. You know, Wednesday, Thursday, uh, here for the, uh, Southeastern building conference, I'll be, there is the MC up on the demo stage, working with some great people.