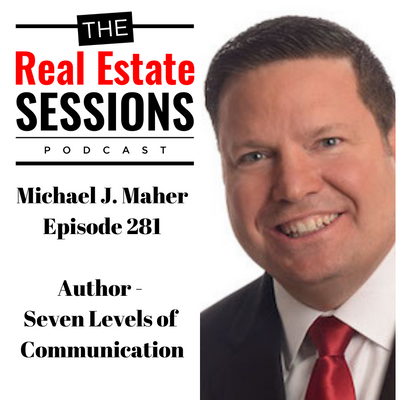 Today's guest is Michael Maher. He is an author, trainer, coach, and speaker who has worked immensely to help Realtors and business owners understand the power of communication and how to turn relationships into referrals.

In this episode, I sit with Michael, born and raised on the Kansas side of Kansas City, about 75% of which is in Missouri. He shares methods, techniques, and strategies developed over the years to improve efficiency and productivity in Real Estate.

"Mastery is my word for Life... I believe in mastery".

"It's easier to be excellent than it is to be mediocre."

"I think everybody has another gear in them that they can tap into, but some have never explored it."

"It's amazing how you can turn a neutral into a positive with something as simple as a handwritten note."

"People say it's all about relationships. It's not. It's about referrals."

"The nice thing about a story is that you can not only tell people what to do, but you can also show them."

"For most people, getting up better does require getting up maybe an hour earlier than they normally do."

"You can do it... Play Real Estate, Enjoy the heck out it, Get better at it".

[05:55] About Michael's experience in sports

[15:15] "The Seven Levels of Communication" by Michael Maher

[26:15] About the Generosity Generation

[36:38] What one piece of advice would you give a new agent just getting started?

The focus of today's conversation is Relationships, Referrals, and the Seven Levels of Communication with our guest, Michael Maher.

Michael shares his experience in sports; it's just amazing how many life lessons I got from sports. You know, the nice thing about baseball is you're going to fail most likely more often, but hard work and practice eventually lead to the point where you're better. The better you are at it, the more enjoyable the game is.

It is critical to strive for mastery in any endeavor. When you're excellent, you get more opportunities; you attract more things, you do things easier because you have achieved a level of excellence. When you're mediocre, everything is complicated. He tapped into another level when he needed to gain superiority and became the quarterback of his team, going to the state championships.

Michael started in college with hopes to go into computer engineering, but after going home for a few years to take care of his dad, who was battling cancer, he realized he wanted to coach and teach. He started as a high school teacher and coach but needed to keep himself occupied during the summer, around which time he bought his first home and was introduced to Real Estate.

Describing his entry into Real Estate, Michael narrates how quickly things moved successfully for him, such that he had to go full time after a year as he couldn't combine the demands with his school job. "My first summer of Real Estate, I made more in those three months than I did in the nine months teaching and coaching three sports, and working 6 am to sometimes 9 or 10 pm".

The Seven Levels of Communication: As the author of this book, Michael explains, the goal is "How do I have the most amount of positive conversations in the shortest amount of time?" Arranged from bottom to top, the Seven Levels of Communication are Advertising, Direct Mail, Electronic Communication, Handwritten notes, Phonecalls, Events (Seminars), with the last at the top being "One on One sales." The bottom three levels are called the "Informational Zone," which is excellent for informing, confirming, updating, and brand development. It is not very suitable for influencing selling or convincing. The most important and most energetic is the One on One. The top 3 levels are the "Influential Zone." If you want to influence, convince or sell, you're going to want to do it with a phone call, an event, or a one on one.

The 4-4-4: 4 things you can do in 4 minutes to get four days of excellent service and convert a "Zero" to a ten on the relationship scale. First, after meeting with someone, text them and say thank you, then send a thank-you email to confirm the mail address is correct, after which you leave a voicemail, and lastly, send a handwritten note.

Describing his motivation for the book, Michael explained that he realized it would be better narrated as a story. He also worked on "The Miracle Morning for Real Estate agents."

The 4 Enriching Rituals: These include a morning ritual, a nightly ritual, a Sunday night ritual, and the closing ritual before you leave the office. The Miracle Morning was born out of the Morning Rituals working with Hal Elrod, and it targeted helping Real Estate agents get some structure in their business. In a class called "30 Mornings", which takes place over 30 days, the entire Morning Ritual is taught to Realtors, and they also develop their own. Also introduced is the "SAVERS" Methodology: Silence, Affirmation, Visualization, Exercise, Reading, and Scribing. Michael added "Appreciation" to this.

Describing the impact of the "Generosity Generation," Michael explains that the world today appreciates generosity more than ever. Today's consumers want to be treated as number one and hear a different mantra; "I am here to help." In the 1920s, the consumer mindset was "Find me, Sell me," but things have changed to "Hear me, Help me" with the Generosity Generation. The model is a Consumer-centric model.

Some of his mentors include his dad, James Ray, Howard Brenton, and Zig Ziglar, who particularly encouraged him to create an audiobook for "The Seven Levels of Communication," and this has been one of the best-selling items yet. Michael believes that Realtors will soon begin to host events as a part of their business strategy.

Michael's advice to new agents: "You can do it." The question is, "How bad do you want it?" Play Real Estate, Enjoy the heck out of it, Get better at it".

The Seven Levels of Communication by Michael J Maher